MVP is just the icing on the cake, the win is what really counts, especially against Tenerife that was undefeated and number 1 in the rankings - Brandon Brown

The American point guard delivered a performance with an efficiency rating of 28 in Nizhny's 75-72 win over Iberostar Tenerife on Tuesday. Brown scored a season-high 26 points, added 5 assists, 4 steals and 2 rebounds for the Russian side to hand Tenerife their first loss in this BCL campaign.

"Being named MVP is just the icing on the cake, the win is what really counts, especially against a team like Tenerife that was undefeated and number 1 in the rankings," Brown told championsleague.basketball.

"Personal accolades are never the goal at the start, I am not going into the game hoping that I have a good game and maybe we can also win.

"I go into the game thinking that I want us to win at whatever cost and I want to help our team in whatever way possible, whether that's by scoring, assisting, defending, that's what I am willing to do."

Perhaps the most important thing that Brown did on Tuesday was to provide his team with the safe pair of hands they needed against a mighty opponent in the final stretch.

We have six more games to play and if we lose them, this big win won't mean anything - Brandon Brown

Tenerife looked on course to pull off yet another comeback win when they overturned a nine-point deficit and jumped ahead 70-69, but Brown knocked down a huge step-back jumper to restore Nizhny in the lead with 1:35 left to play.

"I got a little nervous when they started the fightback, but I had been feeling confident since the start of the game and as it progressed I could see our guys, our attitude, and I felt we had a really good opportunity," Brown said.

"Coach [Zoran Lukic] puts a lot of plays in for me, he gives me opportunities to be aggressive, so I have a lot of confidence to be as aggressive as needed whether to score or to create, depending on the situation.

"I know I have his full trust to find the best option. I am still trying to learn and to improve, but he trusts me to make those reads and in this last game I had a few good reads and it just got going from there."

Brown must be a very fast learner, considering the huge leap both the playmaker and the team he directs on the floor made since the first time they faced Tenerife, in the opening week of the season. The Russian side lost 81-67 in Spain in what was a disappointing BCL debut for the Nizhny point guard.

“We can’t control the waves, but we can learn to ride them.”

"I didn’t have a good showing in that game and we lost," Brown said.

"There was a weird balance between watching that game to try to take what I could from it, while at the same time throwing it out the window and focusing at the task at hand."

Next week there's a new challenge, we have Bamberg coming here and the slate is wiped clean - Brandon Brown

The task at hand changes now that Nizhny have improved to 5-3 in the Group C standings, tied in third place with Peristeri winmasters, but the final objective remains the same.

"This was a really important win for us, because we want to make a push for the Play-Offs and we've just taken a step in the right direction," Brown said.

"But we have six more games to play and if we lose them, this big win won't mean anything.

"I am happy about it right now, but next week there's a new challenge, we have [Brose] Bamberg coming here and the slate is wiped clean.

"I will go into that game with a clear mind. Winning that game is just as important, if not more important.

"So, it's important to enjoy the moment but then get back to work and focus on what we should do next." 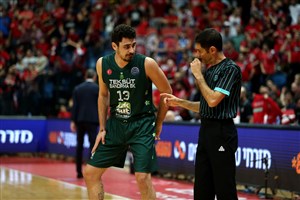 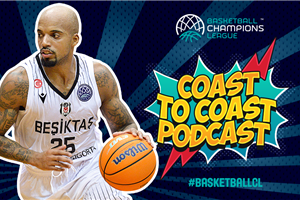