Our rule is that the one who plays well pays for the team, because [a good performance] is a team effort - Robin Benzing

The German international, who turns 31 on Saturday, doesn't expect any special treatment for breaking new ground at the Aragon club. Rather surprisingly, earning MVP honors will actually come at a personal cost.

"No, no, my teammates aren't going to buy me dinner, I am the one who has to pay," Benzing told championsleague.basketball with a laugh.

"Our rule is that the one who plays well pays for the team, because [a good performance] is a team effort. Without my team-mates giving me good passes, I wouldn't have made those shots. They always found me in the game, I just did my job to shoot and score."

On Tuesday night in France, the veteran forward certainly did way more than what was on the job description, as he caught fire to lead Zaragoza to an impressive 105-73 victory at Dijon that secured the Spanish team a place in the Play-Offs.

Benzing poured in a season-high 32 points on 8 of 11 three-point shooting, added 2 rebounds, 1 assist and 1 steal as he registered an efficiency rating of 30, the highest by a Zaragoza player so far this season.

Qualifying for the Copa del Rey and for the BCL Play-Offs were two huge goals but we need to keep our feet on the ground, stay focused and stay hungry - Robin Benzing

"I always try to be aggressive, no matter if I start the game or not. From the first moment I step on the court I try to help my team by scoring the ball, or getting a steal, or in any way I can," Benzing said.

"It's always easier once you score the first basket. I made the first jumper off the backboard and I felt good, that's the most important thing. The rest of the game was a little bit easier thanks to the good start."

Benzing scored Zaragoza's first basket in the game and added a triple and a steal within the first couple of minutes. Then he really went off in the third frame, scoring 15 points on four treys, most of them from really deep.

"The third quarter was huge for me, I made some threes and I also got those friendly rolls. My teammates always found me, so I kept shooting," he said.

"The moment I made those two three-pointers that almost rattled out but finally went in, that is sort of the point where you really know that today is a good day and you can score a lot of points."

We always have to work hard for our wins and especially now, in the second half of the season, when other teams will be more aware of us. So it's not going to get easier, it's going to be very difficult for us - Robin Benzing

Benzing has vast experience with the national team and he played in the BCL also last season, with Besiktas. He is an old hand not only in the competition but also at Zaragoza. The Spanish club was his first stop when he decided to leave the home comforts of Bayern Munich in 2015, and he returned to Aragon last summer for a second stint.

So, it would really take a lot to impress this seasoned veteran. Even though Zaragoza are marching third in the Liga Endesa standings and have punched their ticket to both the Copa del Rey and the BCL Play-Offs, the German forward shrugs off the 'Team of the Moment' label.

"Qualifying for the Copa del Rey and for the BCL Play-Offs were two huge goals for us and we've accomplished them, we're happy for that, but we need to keep our feet on the ground, keep working, stay focused and stay hungry," he said.

"We always have to work hard for our wins and especially now, in the second half of the season, when other teams will be more aware of us. So it's not going to get easier, it's going to be very difficult for us.

On our team, there is a different guy who can step up and make big shots in each game - Robin Benzing

"At Dijon, we played the perfect game. It's not that easy to go to Dijon, who were leading our group, score 100 points and keep them to seventy-something.

"So it was a perfect day for us, we distributed the ball very well, shot it extremely well, we played perfect defense. This has to be our mindset every time, to try to play the perfect game in each game.

"But we still we have to think game by game. Yes, we beat Real Madrid and Barcelona and we're proud of that, but we don't think we're some kind of favorite or we're better than other teams. "

There is however at least one thing that Zaragoza do much better than the majority of teams in Spain, in Europe or anywhere in the world for that matter.

"On our team, there is a different guy who can step up and make big shots in each game," Benzing saifd.

"One day it's D.J. [Seeley], the other day it's Dylan [Ennis],or Nico [Brussino], or Nema [Radovic] and so on. [On Tuesday] it was me but not only me, the whole team scored incredibly well, we had five players in double digits.

"One day I won't score so many points. Against Dijon I was lucky that the guys found me, so I can only thank my teammates and the coaching staff, I was in a position to do what I did because of them.

"This is because of our good chemistry as a team, we understand each other, we know each other's strengths and if someone is getting hot we try to find him.

"It's been working really well for us so far this season." 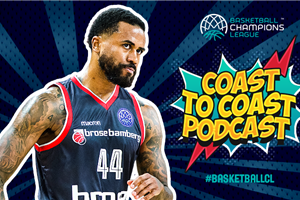 Everything you need to know ahead of Tuesday's Gameday 13 fixtures 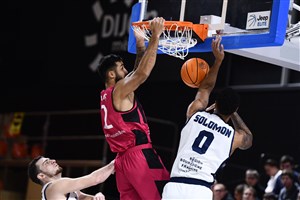