MIES (Switzerland) - Antwerp came up with their best performance of the season to hand AEK a first loss in all competitions since November 19th, while Tenerife delivered an imperial display to edge closer to the 2019-20 Basketball Champions League Play-Offs.

Let's have a closer look at the eight Wednesday encounters that concluded Gameday 10 action:

Antwerp ended their three-game losing skid in Group B and rejuvenated their play-off bid in dreamy fashion, as they handed group leaders AEK their first defeat in all competitions since November 19th, 73-61.

The two sides traded blows during the opening exchanges but the Belgian team edged ahead late in the opening stanza and started off the second quarter on an 8-0 run to extend their lead to 34-21 on a Roby Rogiers layup eight minutes from the halftime buzzer.

AEK stopped the rot, reduced the gap to just 2 points shorty before the interval and stayed within striking distance throughout the third frame.

But with Antwerp leading 55-52 at the start of the fourth, Dennis Donkor drilled a triple and sparked another run by the hosts. Vincent Kesteloot capped it off with a layup 4:22 from the end to lift the Belgian lead to 14 points, 68-54, and AEK had no gas left in the tank for a late rally.

Antwerp have now improved to 3-7 while AEK have dropped to 7-3 and are tied with Hapoel in first place on the table.

All 12 Tenerife players wrote their name on the scoreboard and the Spanish team held Peristeri 21 points below their season average to cruise to an 80-54 win in Athens.

The visitors, who have now put one foot in the Play-Offs, grabbed the lead on a Tomasz Gielo triple about two minutes after tip-off. They reached their first double-digit lead, 17-7, with four minutes left in the opening quarter and led by as many as 21 midway through the second frame.

Peristeri, who were averaging 75 points per game in the first nine weeks of the competition, only managed to come as close as 13 after the break.

Marcelinho Huertas paced the winners with a double-double of 11 points and 10 assists while Alex Lopez, who came off the bench, also finished with 11 points. Gaios Skordilis had 10 points as the only Peristeri player to score in double digits.

Tenerife have now improved to 9-1 while Peristeri have dropped to 6-4.

Dijon showed some inspired long-range shooting to create separation from Brindisi and held on down the stretch to celebrate a 93-85 victory in Italy that anoints them solitary leaders of Group D.

The French side have improved to 7-3 while Brindisi, who lost at home for the first time in the competition, have dropped to 4-6.

The visitors maintained the gap around double digits, even stretching it to 19 points momentarily during the third quarter, ultimately leaving Brindisi with way too much ground to cover when the Italians attempted one of their trademark epic charges on the homestretch.

Rasheed Sulaimon led the way for the winners with 23 points on 8 of 11 shooting, while David Holston finished with 19 points, 5 assists and 4 rebounds. Darius Thompson had 22 points, 7 assists and 4 boards in a remarkable, but losing effort.

Turk Telekom used a 14-2 burst bridging the final two quarters to create a double-digit gap and held off the feisty Lietkabelis down the stretch to clinch a 92-83 win in a highly entertaining clash.

Muhammed Baygül knocked down a trey right at the third buzzer to lift the hosts to a 64-60 lead heading into the final stanza and the same player capped off the run with another triple, 4:54 from the final buzzer, that stretched the gap to 75-62.

In a game that resembled a three-point shootout, as the two teams drilled 14 three-pointers apiece with excellent shooting accuracy, Lietkabelis made three triples in quick succession and reduced the gap to 6 points with just over a minute remaining.

Kyle Wiltjer however converted a three-point play 58 seconds from the end to put seal the win for the hosts and finish with a game-high 27 points, on an excellent 11 of 15 from the floor. Wiltjer got a lot of help from RJ Hunter, who finished with 18 points and 4 assists, while Paulius Valinskas had 17 points for Lietkabelis in a losing effort.

Turk Telekom have now improved to 7-3 and are tied in first place with Manresa and Dinamo Sassari, while Lietkabelis have dropped to 4-6.

Zaragoza rode the hot hand of Nicolas Brussino in the second half to hand Falco their first loss at home in the competition, 77-70, and climb to joint-second in the too-tight-for-comfort Group D standings.

The Spanish team delivered the best three-point shooting display of their brief BCL history, converting 12 of their 27 attempts from behind the arc. Zaragoza built a 68-57 lead midway through the fourth stanza but the resilient hosts clawed their way back and reduced the deficit to 72-70 with just over two minutes remaining.

Brussino however drilled a one-legged three-pointer at the end of the 24-second clock to stop the rot for Zaragoza and, after Falco missed back-to-back shots on the other end, he sealed the deal for the visitors with a dunk 34 seconds from the final buzzer.

The Argentinian international scored 16 of his game-high 19 points in the second half, as he went 5 of 7 from downtown. D.J. Seeley was outstanding for the winners in the first quarter and finished with 18 points and 4 assists. Falco's Marko Filipovity had 15 points and 2 rebounds in defeat.

Zaragoza have now improved to 6-4 while Falco have dropped to 5-5.

Manresa jumped into the driver's seat shortly after tip-off and led Strasbourg by as many as 29 points as they raced to a comfy 92-68 victory over the French side.

The Spanish team have now rejoined Dinamo Sassari and Turk Telekom as joint leaders of Group A on a 7-3 record, while Strasbourg slide to 4-6 in a three-way tie in fifth place.

Manresa led by 12 points at the break an a Juampi Vaulet layup 3:02 from the end of the third period stretched the gap to 20 points, 56-36, leaving Strasbourg with a mountain to climb the rest of the way.

Luke Nelson and Deividas Dulkys had 15 points apiece for the hosts, the former also adding 5 assists. Meanwhile Thomas Scrubb finished with 15 points and 6 rebounds in a losing effort.

Bamberg dug deep and recovered from a disastrous start to prevail 86-81 over Gaziantep at home and reduce the distance from the top-half of the Group C table to just one win.

Gaziantep on the other hand now need to win all four of their remaining games to stand any chance of qualifying to the Play-Offs.

The Turkish team raced to a 12-0 lead at the start but Bamberg snapped out of the initial shock, started to chisel away at the deficit and Bryce Taylor hit a triple with 6:59 remaining in the second quarter to put the hosts in front, 28-27.

Gaziantep kept breathing down the neck of the German side and regained the lead, 58-57, on a Metehan Akyel trey with 4:01 left in the third frame but Paris Lee replied swiftly with a three of his ownt that instigated a 16-2 Bamberg run.

Kameron Taylor paced the hosts with 15 points and 5 assists while Lee finished with 13 points and 2 assists. For Gaziantep, Jason Rich had a game-high 18 points and added 5 assists in defeat.

Holon rediscovered the joys of high-scoring basketball in their first BCL game under new head coach Stefanos Dedas and raced to a 99-86 victory over Polski Cukier Torun.

The Israeli team, who had defeated Torun 122-105 in the reverse fixture in Poland, to record the highest combined score in competition history, have now improved to 4-6 in the standings. The Polish side meanwhile slide to 2-8 and remain bottom of the group.

A layup y newcomer Angel Delgado 4:40 from the end of the opening quarter gave the hosts their first double-digit lead of the night, 14-4, and Holon never looked back.

The hosts led by as many as 18 points after the interval as they shot 12 of 24 from behind the three-point arc and dished out a collective 27 assists.

Veteran Israeli international Guy Pnini paced the winners with 20 points and Troy Caupain chipped in with 19 points, 7 rebounds and 4 assists. Keith Hornsby had 14 points and 4 rebounds for Torun in a losing effort. 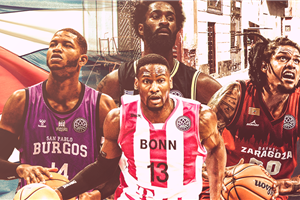 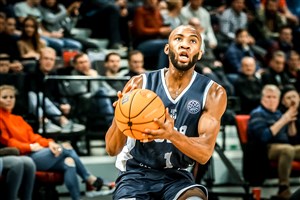