MIES (Switzerland) - Former competition champions AEK, reigning Czech champions ERA Nymburk and the Spanish duo of BCL debutants Casademont Zaragoza and San Pablo Burgos emerged on Tuesday as the first four Quarter-Finalists in the 2019-20 edition of the Basketball Champions League, after each completed a 2-0 series sweep of their respective Round of 16 series.

Filou Oostende meanwhile will live to fight another day as they stunned powerhouse Iberostar Tenerife and tied their series at 1-1.

Zaragoza overturned a 10-point third-quarter deficit in a clash that at times resembled a three-point shootout and eked out a 90-88 win at Lietkabelis to punch their ticket to the Quarter-Finals.

Lietkabelis shot an outstanding 11 of 13 from three-point range in the first half and led by as many as 12 points, 48-36, shortly before the half-time interval.

A buzzer-beating Carlos Alocen triple at the end of the third quarter though capped a 13-6 Zaragoza burst and the visitors entered the final frame trailing only by four points, 73-69, as the momentum was starting to shift.

Rodrigo San Miguel drilled a trey 6:38 from the final buzzer to give Zaragoza their first lead, 80-77, and the two sides traded blows until 30 seconds from time, when Nicolas Brussino took the lane and gave the visitors a 4-point cushion with a floater, 89-85.

The hosts called a timeout and when play resumed Tomas Dimsa knocked down a triple to make it a one-point game. Lietkabelis proceeded to foul Dylan Ennis and the American guard split his free-throws to make it 90-88 for Zaragoza but the hosts wasted their last possession as Martynas Sajus was called for a foul as he tried to set a screen.

Zaragoza finished 15 of 27 from downtown (compared with 17 of 31 from two-point range) and, crucially, out-rebounded their hosts 31 to 19.

Brussino led the winners with 21 points on 5 of 7 three-point shoooting, while Ennis finished with 19 points and 7 assists. For Lietkabelis, Dimsa had 18 points and Sakic finished with 17 points, 5 rebounds and 5 assists in defeat.

Nymburk sealed on Tuesday their passage to the BCL Quarter-Finals for the first time in club history, after defeating Bandima 86-72 on the road to complete a 2-0 series sweep of the Turkish team.

The Czech champions jumped in the driver's seat shortly after the opening tip and led by double digits already in the first quarter, but the youthful hosts reduced the gap to just one point at the start of the second frame.

Martin Peterka though scored all 11 of his points within less than three minutes in the final stretch of the second period to spark a 15-4 Nymburk burst and the visitors went to the locker rooms holding a 15-point lead, 48-33.

Nymburk kept their hosts at arm's length after the break and even when Bandirma managed to cut the deficit to 8 points midway though the fourth, Hayden Dalton sunk two free-throws to instigate a mini-run and the Czech side pulled away again, 76-61 with just 3:55 left on the clock.

Vojtech Hruban led six Nymburk players in double digits with his 19 points and added 7 rebounds, 4 assists and 2 steals, while Zach Hankins chipped in with 15 points and 7 boards.

For Bandirma, 17-year-old power Alperen Sengun collected an impressive double-double of 25 points and 13 rebounds in a losing effort.

Oostende jumped in the driver's seat right after tip-off and delivered a solid defensive display as they led Tenerife the entire way to claim their first-ever win in the Play-Offs, 75-69, and tie the series at 1-1.

The Belgian team didn't allow their famed Spanish rivals to score more than 19 points in any of the four quarters and got a valuable contribution from their bench, who outscored Tenerife's 46 to 15.

The hosts stretched their lead to 14 points in the third frame but Tenerife clawed back and a Giorgi Shermadini layup cut the gap to 59-56 with the start of the fourth.
Troy Caupain however drew a foul as he was attempting a three-pointer and made all three free-throws and Olivier Troisfontaines drilled a three seven minutes from time to restore a 9-point cushion for Oostende, 68-59.

The hosts held off Tenerife down the stretch, as the Spanish team only scored 10 more points until the final buzzer and never managed to make it a one-possession game again.

Jean-Marc Mwema was inspirational for Oostende in the second half and finished with 17 points and 3 rebounds, while MiKyle McIntosh chipped in with 11 points and 4 boards. Shermadini had a game-high 19 points and 5 rebounds in a losing effort.

AEK scored 29 points off Bonn turnovers and turned the tables on the hosts in the final stanza to ride out 90-86 winners from Germany and earn a trip to the Quarter-Finals for the third season in a row.

Both teams seemed largely unaffected by the lack of spectators - the game was played behind closed doors due to the coronavirus outbreak - and started trading baskets right from the start, as the contest featured 14 lead changes in the first half.

Bonn appeared to be gaining control on proceedings midway through the third quarter, when they led by as many as 9 points, but Nikos Gkikas scored 8 points in quick succession at the start of the final frame and a Marcus Slaughter layup put AEK in the lead, 72-70 with seven minutes left on the clock.

Keith Langford got the friendly roll on a long jumper 1:37 from the final buzzer to give AEK an 84-81 lead and, after Bonn missed on the other end, the American sharpshooter tried his luck from deep.

He missed, but Vlado Jankovic came up with the offensive board and gave the visitors their biggest lead up until that point, 86-81 with just 57 seconds left to play, and Bonn wasted the ensuing possession.

Langford paced the Greek team with 25 points while Slaughter came up with a BCL season-high 17 points and 9 rebounds. Trey Mc Kinney Jones finished with 18 points and 6 rebounds for Bonn in losing effort.

Burgos used a 17-2 run bridging the first two quarters to erase an excellent Sassari start and raced to a 95-80 victory on the night and a 2-0 series win, in what is the Spanish team's maiden postseason appearance in a European competition.

In a game that was played behind closed doors due to the coronavirus outbreak, Sassari got the hot hand early on as they shot 7 of 9 from downtown in the first quarter and led 30-15 late in the period.

Thad McFadden and Vitor Benite though knocked down a triple each in the final 70 seconds of the quarter to spark the hosts' reaction and, 4:56 from the end of the second frame, Jasiel Rivero came up with an offensive board off a McFadden miss and gave Burgos their first lead of the game, 35-34, with a layup.

Sassari stopped the rot but Burgos went into the half-time interval holding a two-point lead and a Ferran Bassas stepback-three 6:33 from the third buzzer stretched the gap to double digits, 57-45.

The visitors reduced the deficit to nine points momentarily, but the momentum had now shifted once and for all and Burgos led by a comfortable distance the entire fourth quarter to celebrate the victory that earned them a spot in the Quarter-Finals.

Earl Clark paced Burgos with 22 points and 5 rebounds while Rivero collected a double-double of 17 points and 15 boards and Bassas also had 17 points. Sassari's Marco Spissu finished with a game-high 24 points on 5 of 7 three-point shooting in defeat. 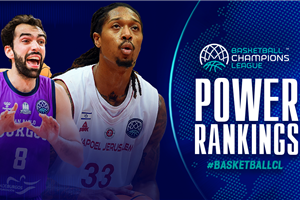 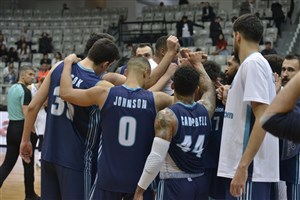