👀 Here are the results of the first Leg of Qualification Round 1! The return Leg will be played on Saturday! #BasketballCL pic.twitter.com/tQeRuNNtzE

As you would expect, the night was not short of drama and action, setting up a highly anticipated Round 2 on Saturday.

Telenet Giants Antwerp took the lead in the third quarter and didn't look back as they rolled to a 83-74 win over AEK Larnaca in Round 1.

In a game that featured 15 lead changes in the first half, Antwerp dominated on the glass led by Jae'Sean Tate's 10 boards along with his 21 points, as Paris Lee added 13.

Dinamo Tbilisi vs Aris
Aris led by as many as 31 points on their way to a 90-64 rout of Dinamo Tbilisi  in Round 1 on Thursday afternoon in Georgia.

The 🇬🇷 squad @ArisBCgr win the opening leg of Qualification Round 1 in 🇬🇪! #BasketballCL

The Greek side led from start to finish, dominating behind 18 points from Lefteris Bochoridis and 12 from Boris Dallo. Four players had nine points for Tbilisi, who have their work cut out for Gameday 2.

"It was the first official game for us," Evangelos Angelou, Head Coach of Aris commented.

Trailing early in the fourth, Karhu pulled away before holding off a late rally from the Romanian side.

Rene Rougeau had 19 points for Karhu, whilst Bojan Sarcevic had 12 assists. Kristopher Richard had a game-high 20 for Oradea, and Vaidas Kariniauskas finished with 18.

Polski Cukier Torun vs Tsmoki-Minsk
Torun protected home court with an 87-61 win over Tsmoki-Minsk, behind a dominant performance from Aaron Cel in Poland.

A dominant 29-4 opening period set the tone, as the home side never looked back to put themselves in a strong position heading into Gameday 2.

Cel missed just one shot on his way to 27 points, Rob Lowery added 10 assists, and Cheikh Mbodj finished with 15 points.

Zisis Sarikopoulos led Minsk with 10 points in 14 minutes before fouling out.

Norrkoping will be frustrated with themselves after letting a 14 point lead slip in the first half, as Estudiantes dominated the third and fourth quarters to pull out the win.

Victor Arteaga had 12 points to lead five players in double figures for Estudiantes, whilst Mikael Lindquist led the Dolphins with a 20-point outing.

BC Siauliai vs Lukoil Levski
Lukoil Levski finished the game on a 16-4 run to take a 91-79 win over BC Siauliai  to steal home court advantage in Gameday 1.

The 🇧🇬 Champs @LevskiLukoil win on the road by a 12-point margin in the opening leg of Qualification Round 1! #BasketballCL

Up until that point, it was a back and forth affair, featuring 15 lead changes but ultimately Lukoil Levski took advantage of converting 28 points from turnovers.

Deyan Toshkov Ivanov and Bozhidar Avramov led the victors with 25 and 23 points respectively, whilst Karolis Lukosiunas and Ignas Vaitkus had 14 points-a-piece for BC Siauliai.

The side from Kosovo scored 28 points on the break, as A.J. Davis had 25 points and 9 rebounds on 9-for-13  shooting and Demario Aquan Mayfield 14 points and 8 rebounds. Shane Hammink had 11 points to lead Groningen.

Riders are the first British team to compete in European competition in 12 years, but struggled to contain the Danish champions. Hayden Dalton had 17 points to lead Bakken, with Michel Diouf and Ryan Evans adding 16 each.

Riders were led by recent signing DeAndre Burnett with 24 points.

😮 Tied game in #BasketballCL Qualification Round 1 between @FribourgOlympic & @AvtodorSaratov ! The return leg will be played on Saturday in 🇷🇺 !

Fribourg opened the game on a 20-4 run before the visitors fought back to set up a thrilling finish.

A dominant 23-point, 12-rebound and 4-assist outing from Babacar Toure and another 24 points from Dusan Mladjan led Fribourg Olympic, whilst Jackie Carmichael had 18 points to lead five players in double figures for Avtodor Saratov.

It capped a 20-point night for Grigoryev and Kendrick Perry had 21 for Nizhny Novgorod, who had led by as many 14 before relinquishing their lead.

Cantu had a double digit lead in the third period, before Szolnoki Olaj asserted themselves in the fourth to pull it back to one ahead of Gameday 2.

Frank Gaines scored 19 points to lead Cantu, Gerry Blakes had 16,  whilst Ike Udanoh had 12 rebounds to go with his 9 points. David Vojvoda finished with 22 points for Szolnoki Olaj.

Dominant in the first half with a 41-30 lead, Tel Aviv let Charleroi back in the game, the Belgian side scoring 43 points in the second half for 35 for the Israeli side.

.@HapoelTLVBC win the first Leg of Qualification Round 1 in 🇮🇱 against @SpirouBasket! The return Leg will be played on Monday! #BasketballCL

The return leg will be played in Charleroi's Spiroudome on Monday evening, last game of the Qualification Round 1 second leg. 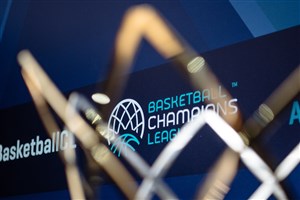