ANTWERP (Belgium) - Iberostar Tenerife ensured they would be returning to the Basketball Champions League Final following a 70-54 win over Telenet Giants Antwerp on Friday evening.

In front of a packed house of more than 17,000 people at the Sportpaleis, it was underdogs Antwerp who struck early before Tenerife's championship calibre shone through to overturn a deficit, dominating the second and fourth quarters behind the play of Nicolas Brussino.

Brussino went for 17 points, 4 rebounds and 3 assists for 2017 Champions Tenerife, whilst Javier Beiran had 14 and Pierre-Antoine Gillet joined them in double figures with a crucial 11.

"It's a great opportunity to come back to Belgium and play such a tournament," Gillet said.

"At the beginning we tried to look and find each other, first quarter we had a lot of turnovers, but second quarter we only gave up 6 points and that was the key tonight. We won the battle of the rebounds and that was also a main key."

13 points a piece from  Tyler Kalinoski and Jae'Sean Tate led Antwerp, who will now focus on third place. Meanwhile, Paris Lee was held to less than 7 points for the first time in his Basketball Champions League career, managing just 4 on 1-of-9 shooting.

"I want to congratulate Tenerife for making it to the Championship game," Lee said. "They did a very good job of getting us out of our rhythm. I thought we matched their intensity at the beginning, but as the game went on, I think their experience showed today. "

Brussino got a steal and dunk on the first possession, perhaps being an ominous sign of things to come, but it was Antwerp who got the early double-digit lead behind a balanced team effort sparked by Jae'Sean Tate.

However, behind the 3-point shooting of Gillet, who knocked down his third triple to tie it up at 24 with a little over five minutes to play in the half, Tenerife fought back. They locked down defensively to hold Antwerp scoreless for the final 4:36 of the half, to take a 31-26 lead into the break following a 16-2 run.

A 10-2 run to start the third, including back to back hook shots from Beiran, gave Tenerife their first double digit lead of the game, 41-31 with 5 minutes to play. Antwerp responded with a run of their own to pull within five heading into the final period.

A 4-point play from Brussino to open the fourth put Tenerife back up by 9, before he knocked down another triple to put Tenerife up double digits from which point they would not look back, cruising their way into the Final on Sunday. 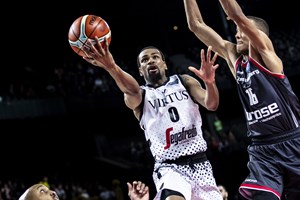 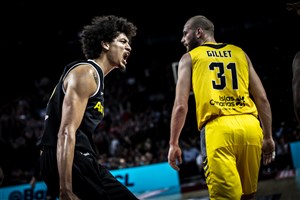