Tenerife & Murcia keep on rolling - Gameday 5, Tuesday Round Up

MIES (Switzerland) - A jam packed nine-game slate was not short of action to open up Gameday 5 on Tuesday night, with two teams continuing their hot streak to start the season.

Here's a round up of everything that happened:

Nizhny Novgorod picked up their second win of the season with a 85-71 victory of Le Mans.

A high energy Nizhny Novgorod side jumped out to a 20-12 first quarter lead and didn't relinquish the lead the rest of the way, leading by as many as 21 as they shot just short of 60% on the game.

Wilfried Yeguete and Demitrius Conger finished with 13 each for Le Mans, who were unable to make it three wins in a row.

Notable Number: 76.9 - the percentage Nizhny shot from inside the arc, in what was an insanely efficient performance.

Searching for their first win of the competition, it looked like Ludwigsburg would have it after a Lamont Da'Sean Jones lay-up gave them a five point cushion with 30 seconds left but Ventspils had other ideas.

Rihards Lomazs' three pointer with 7 seconds remaining forced an extra period, and after Malcolm Hill knocked down his own three pointer to pull Ludwigsburg within one at the end of OT, Aaron Johnson turned the ball over giving the visitors one final shot; but Jones' fadeaway jumper came up short.

Maris Gulbis had 19 points to lead Ventspils, Jonathan Arledge had 18 points and 9 rebounds, whilst  Johnson had 13 assists with his 17 points.

Hill missed just two shots on his way to 19 points for Ludwigsburg, who dropped to 0-5. Adam Waleskowski added 17 and Jordon Crawford had a 10-point, 11-assist double-double.

UCAM Murcia picked up a solid 87-68 win on the road over Anwil in Poland, remaining undefeated at 5-0 in the Basketball Champions League.

Charlon Kloof finished with 15 points, 5 rebounds, 5 assists and 7 steals to lead Murcia, including the momentum changing buzzer-beating triple to end the third period as Murcia pulled away for good in the fourth.

Sadiel Rojas also had 15, Milton Doyle finished with 14, and Damjan Rudez had his season-high with 10 off the bench.

Chase Simon and Michal Michalak led Anwil with 19 points each, with Kamil Laczynski dishing 10 assists. Anwil, who were hanging around for three of the four quarters, fell to 2-3 with the loss.

Notable Number: +11 - the rebounding differential, as Murcia won the crucial battle on the glass.

Lietkabelis pulled away in the fourth quarter for a 78-62 win over JDA Dijon, who fell to their fourth consecutive loss.

Simas Jasaitis had an 8 point stretch across in a little over a minute in the early stages of the third to spark Lietkabelis, as he finished with 16 points on 6-for-7 shooting.

Jamar Wilson added 12 points, and Saulius Kulvietis and Dominik Mavra finished with 11 each, as Lietkabelis improved to 2-3.

Notable Number: 28 - the number of points Lietkabelis poured in, in the fourth quarter, to secure the win.

PAOK picked up their second consecutive win, 94-69, after a three-point battle with Opava.

Opava went 8-for-8 from beyond the arc in the opening period to take the early lead, but cooled down from there as PAOK would heat up - the Greek side finished with sixteen triples in 30 attempts on their way to a comfortable victory.

Phil Goss had 18 points to lead PAOK, Ioannis Athinaiou had 17 points and 5 assists of the bench, whilst Yanick Moreira had 15 points in just 15 minutes.

Opava were led by 14 from Jakub Sirina, and 13 from Radim Klecka, but the Czech squad fell to their fourth straight defeat in the Basketball Champions League.

Notable Number: 28 - the total number of threes combined the two teams made, as they both showed off impressive shooting pedigree.

Daye finished with 9 of his 21 points in the fourth, and came up with a number of big plays, as Venezia held off a Bonn rally that saw them fight back from as many as 14 down.

Josh Mayo scored 26 with 6 assists in defeat for Bonn, with Charles Jackson collecting 14.

Venezia improved to 4-1 in the Basketball Champions League and 9-1 in all competitions this season, as Bonn fell to 2-3.

Notable Number: 9 - Austin Daye's fourth quarter tally, as he came up big whenever Venezia needed him to.

Stevan Jelovac went 9-of-15 from the floor for 30 points in 30 minutes, along with 7 rebounds for good measure, whilst Nikos Zisis finished with 13, including a huge three-pointer and a couple of free throws to ice the game late in the final period.

Ismael Bako's 25-point effort would not be enough for Antwerp, neither would Paris Lee's 16-point, 11-assist double-double, as they fell to 2-3.

Notable Number: 30 - the number of points Bamberg scored in the first quarter, to take a commanding fifteen point lead.

Nanterre converted on 16 threes  - 12 of which came in the second half, where they used a 9-2 run bridging the third and fourth quarters to gain an advantage they would not give up the rest of the way.

Babacar Toure continued his individual dominance with 21 points and 11 rebounds, and Dusan Mladjan added 17, but it would not be enough for Fribourg, who fell to 1-4.

Notable Number: 16 - the number of three-pointers Nanterre hit, as they finished just short of 50% from beyond the arc.

Iberostar Tenerife dominated at both ends of the floor on their way to an 84-52 rout of UNET Holon, to stay undefeated at 5-0.

Holon had been averaging almost 90 points per game coming into the contest, but Tenerife had other ideas, not allowing them more than 15 points in a quarter.

Darion Atkins led Holon with 13 points and 9 rebounds, as they fell to 3-2.

Notable Number: 25 - the league's leading assisters, Tenerife, finished with 25 as they continue to play for each other and not themselves. 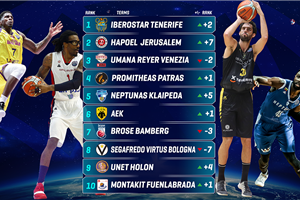 Power Rankings: Old sheriff back in town, but don't forget about Jerusalem 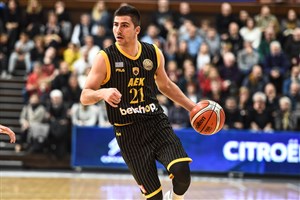