LONDON (England) - If last year's "under the radar" team was CEZ Nymburk, this year you could take your pick from almost any of the teams in Group A.

Nizhny under the radar

For now, the team that feels most like last year's Nymburk is Nizhny Novgorod. The Russians are locked in a Play-Off battle with another under the radar team in Anwil. Coach Zoran Lukic has his team playing a very underrated brand of basketball. On Gameday 7, Nizhny pulled the trigger on this peach against Ludwigsburg. The play starts with Kendrick Perry entering the ball to the wing and cutting through the lane. Dragicevic then sets a false pick-and-roll on the wing. Both actions only serve the purpose of deception as Nizhny reverse the ball, empty the strong side corner, then run the action they really want to score from: a dribble pitch into a back screen and lob.

Gameday 8 and Nizhny were running their pet play again. I say pet play. but in truth, it's more of a pet action. The same dribble pitch into a back screen for a lob. But this time on the other side of the floor, with a completely different entry. This may be a high impact play but it isn't a high volume action for Nizhny and because of that fact and the fact they can clearly run it from different entries, it's very hard to prepare for.  No doubt Sidigas Avellino won't be the last team to fall prey to the Nizhny lob.

In his Help-Side column, Igor Curkovic awarded his customary team of the week to the Champs AEK. And for good reason. AEK are absolutely rolling right now. 7 wins on the bounce and the latest, on the road at many people's title favorites, Hapoel Jerusalem. The win was hugely indebted to Malcolm Griffin putting on one of the performances of the season.

But down the stretch, the play that caught my eye was AEK's empty corner pick-and-roll. We often call plays like this "Empty" because the offense clears or empties the strong-side corner and isolates a ball screen on one side of the floor. Ordinarily, a defense would want to help from the weak-side anyway but if executed correctly (which AEK certainly did) the angle of the screen and the verticality of the roll, means it's too far for the defense to come over. What that means is the defense has to cover the action 2v2. When the roll-man is Vince Hunter, that's easier said than done. Luca Banchi went to this play two possessions in a row, late in the fourth and broke the back of the game. It may not be as deceptive as Nizhny's lob but it was just as deadly.

Hapoel Jerusalem lost that game and with it, they also lost the head-to-head with AEK, but at this stage, the result feels far from fatal. They still have clear daylight in the Play-Off race and whether they finish first or second, this is still a team that nobody wants to draw in the knockouts. One of the main reasons that Jerusalem is such a tough draw, has been the form of James Feldiene. #14 in red has been a human flame from deep this season and Coach Kattash has run some fantastic actions to get him good looks. The play in the video below has been my favorite. Not just because of the play design but because of the way Jerusalem have used it.

Watch the two clips again and notice that Jerusalem ran the same action twice, to create the same shot, for the same player (Feldiene) - but with that player starting in different roles. In the first play, Blatt starts in the PG role and Feldiene in the shooter's role. Watch how Blatt doesn't enter the ball into the post triggering the split screen for Feldiene. Then the next time down they swap and Feldiene plays PG and Blatt the shooter. Feldiene enters the ball into the post, this time triggering Blatt to cut through and the split screen to come for him instead.

Scouting works but it doesn't. In the clip below you can see that AEK's players clearly read the scouting report on this action. Hunter is in position to switch the split screen and has the foot speed to stay in front of Feldiene after snuffing out the shot. No matter for Jerusalem though as they improvise on the broken play and Blatt hits Feldiene on the second skip pass.

Before the start of the season, we interviewed Brose Bamberg Head Coach Ainars Bagatskis and he told us he wanted his team to play smart basketball. To illustrate his point we referenced a set that he ran with his Latvia team at Eurobasket.

We fully expected Bagatskis to deliver on his promise of a Bamberg team playing smart basketball. We didn't expect them to run this exact same set. Well, against Fuenlabrada they did exactly that. This time creating a good look for Bryce Taylor

This may not have been the first time that Bagatskis has run this set with Bamberg, but more like the first time I noticed it. Either way, it hasn't yet been as high volume for Bamberg as it was for Latvia and could well be something to look out for as Freak City heads downhill into the second half of the season. With Ricky Hickman back on board and the results starting to flow, this Bamberg team are starting to look ominous. 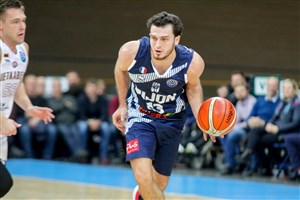 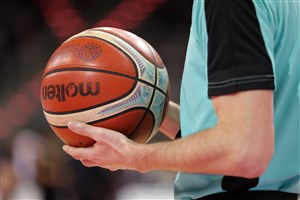