Ranking the all-time poster dunks of the #BasketballCL

ZAGREB (Croatia) - In my mind, alley-oops are as overrated as Jan Koller headers. It's like a cheat code. Give me the good-old, bye-Felicia, in-your-face poster dunks, like the one Jamal Jones just served up.

You missed it? Well, that's what the help-side defense and the Help-Side Columns is here for. Thank me later:

That dunk was so good it almost made me hit "report inappropriate" on Instagram. It was arguably the dunk of the season, with added value to it, because PAOK ended up winning the game against Umana Reyer Venezia, and Jamal Jones moved up on my Top Jones' List, above Norah Jones and Lucky Jones, just below Indiana Jones and Popeye Jones.

Seriously... Look at the replay from behind the backboard.

It feels like he was moving in slow motion to start the drive, then suddenly hit the Turbo Boost button in Crash Team Racing. It's certainly the most disrespectful dunk of the week. Probably of the season, too, although Chase Fieler might have something to say about it.

But where do they rank all time, these two? Not counting alley-oop dunks, they usually feel like Borussia Dortmund's early 2000s attacks, when people would just toss it up there, and Jan Koller put his basketball size to good use, scoring a bunch of easy headers because he was so much taller than everybody else.

Back in Season 1, we had a team named Mega playing the League. They were known for their colorful appearance, and Rade Zagorac gave the idiom "with flying colors" a whole new meaning as he detonated in Montenegro.

That's one way of letting Mornar know that the ship has sailed and that's funny because Mornar means "sailor" in Montenegrin.

Basketball Champions League had its own version of the Shaq Attack in Season 1. Shaquielle O'Neal McKissic was in full flight for Muratbey Usak Sportif, and this one was the most impressive of his campaign.

Nik Slavica with the mega-dunk on Mega

Back in 2015, at the FIBA U19 Basketball World Cup, an American player* thought he had a path to the hoop. Decided to try and dunk it. Well, that player did not read the scouting report, because Nik Slavica has been an athletic beast since day one of his career. Mega also learned Croat's physicality back in Season 1.

*The American player was that kid named Jayson Tatum. I think it's safe to say his career worked out a bit better than Slavica's.

Bandja put the Sy in "see you later"

Another dunk from the inaugural season of the Basketball Champions League. Seems like defenders learned how to get out of the way as the competition grew. But, Bandja Sy will remain the man who put not one, but two players on his poster.

In season two, all the other attempts were futile once Chris Evans took flight against UNET Holon. AS Monaco's forward ended up winning the Best Dunk of the Season award.

Being a good helper here, I'm going to let you speak again. What was the best poster dunk of the Basketball Champions League history?

Speaking of voting... Now, I don't need to be a Ross Geller here to tell you that WE WERE ON A BREAK over the past couple of weeks, so the opportunity to review the first half of the Regular Season presented itself. Well, we decided to hear your voice with the "MVP of the season so far" voting and the "Who is going to reach the Final Four" poll.

Turns out, the answer to both questions is - Anwil fans.

Anwil won a huge game against Ventspils this week, taking them to 4-4 in Group A, just a win behind second- and third-placed Sidigas Avellino and Banvit, all tied with Nizhny Novgorod in the battle for fourth spot. Well, a win in Russia next week could be the turning point and "the whole city" could be right. Anwil could turn into a legit Play-Offs/Quarter-Finals/Final Four contender.

Rather than just selecting All-Star Five kind of team, allow me to select an actual team as the team of the week. This time, former Houston Rockets head coach Rudy Tomjanovich's words provided the answer.

You know the quote. "Don't ever underestimate the heart of a champion!" Especially not in the biggest game of the season so far, with Hapoel Jerusalem hosting AEK. The Queen's heart belonged to Malcolm Griffin, who picked a perfect timing for his best outing of the season, handing AEK their seventh - yes, full circle - win in a row!

With Griffin exploding, AEK just got another weapon. Scary, right? Seems like back-to-back Basketball Champions League titles are an achievable goal for this squad.

Until then, they'll have to settle for this, their second selection to Help-Side's Team of the Week segment. 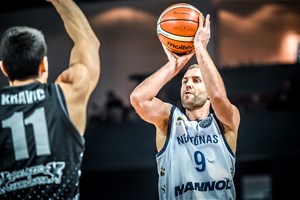