ANTWERP (Belgium) - Somewhere around 2,000 shots per day. That's all it took for Segafredo Virtus Bologna's Kevin Punter to become the most lethal weapon in the history of the Basketball Champions League.

It is crazy to picture it nowadays, but there was a time when Punter's shot wasn't that reliable, not at all. Back in his days with the Tennessee Volunteers, Kevin took advice from his coach Rick Barnes, building a culture that is still there for the Volunteers, while Punter is out here, winning trophies across the pond.

"I told him about his shot. I said, 'Your shot is never going to pass the eye-candy test.' I said, 'You need to get it right.' And he said to me, 'I'll do whatever I need to do.' He would literally go 2,000 shots a day. He would start from ground zero. He got frustrated at times, but I said, 'I told you it wasn't going to be easy. It can't happen unless you make it happen.' And he did," coach Barnes told USA Today back in January.

Something of an omen, since Punter would go on to "make it happen," and become first man to win back-to-back Basketball Champions League titles.

"I'm really just speechless, man, to be honest with you. Just speechless. I was emotional before the game, even in it, just because I know how hard we all worked to get in here. And then to get here, and really win it... It's just special," the MVP of the Final Four said.

"I went over to AEK in the middle of the season, and this year I was here from August, and we've been through a lot with each other. A lot of ups and downs, a lot of people in the media that doubted us. And we just stuck together, had a coaching change and at that point of time it was just a lot going on. I credit those guys in the locker room for staying together, it wasn't always perfect. That's why I was so emotional, because we've been through so much, through a lot of adversity, and to put it all together at the right time it was just big for us," the two-time winner explained.

Player from Lavrio, Antwerp, Rosa Radom, AEK and Virtus can confirm this. Kevin Punter is one of the finest teammates you could ask for, a competitor willing to do whatever it takes to guide his crew to the top. And he is well aware he can't do it by himself, mentioning his coaching staff and the teammates more than once during his media time in Belgium.

"(We have an) amazing relationship. We've been with each other since August. We eat together, we were all in the same hotel, we won together and lost together, long practices together, went through adversity together. We have a bond that's really tough to break. When coach Sasha came in, he made it even closer, even tighter. He made us stick together," he said, pointing the finger to coach Djordjevic and getting the nod of approval in return.

With winning embedded deep in KP's blood, and Virtus being hungry for trophies, it feels like seeing the number 0 with the Black V next to it is a match made in heaven.

"This is a historic club. This club wants to win championships. If you are going to come here, and your mind is not going to be on winning the championship, it's not the place for you. I'm just happy and blessed to help this club win another European title. It's been awhile. I know this means a lot for the club."

Historic club, indeed. Just look at the top scorers or MVP award winners who won European trophies with the club. Sugar Ray Richardson led Knorr Bologna to the FIBA Cup Winners' Cup in 1990. Zoran Savic, Sasha Danilovic and Antoine Rigaudeau were there to pick up the FIBA EuroLeague trophy with Kinder Bologna in 1998, Manu Ginobili was unstoppable in the 2001 EuroLeague, and Keith Langford made sure that the FIBA EuroChallenge 2009 also landed in Bologna.

Elite company for Kevin Punter, who now joins that illustrious list. It only took 2,000 shots every single day to get there. 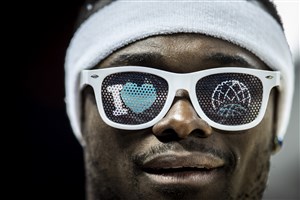 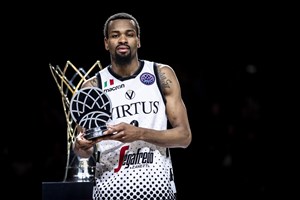