ANTWERP (Belgium) - If the first Semi-Final was almost wall to wall domination for Virtus Bologna, the second Semi-Final may have ended with a similar score differential, but it was a much tighter game.

The young guns of Antwerp had clearly prepared well for their opponents and started the brighter of the two teams. For a player like Javier Beiran to speak after the game about his team overcoming nerves, you get a picture of the challenge the young Giants posed. In the opening minute, the Black and Yellows made it clear where they felt their advantage was. They went straight to Colton Iverson on a deep catch after the pick-and-roll. The outcome was an early foul on Ismael Bako.

But the Giants had clearly predicted the way Tenerife would attack them and formulated a plan. Watch the three clips in the video below, on each occasion you see Antwerp fighting over the ball screen and Bako dropping to show just long enough but also taking away the pass to Iverson on the roll. In the second clip, you see Sanders playing excellent on-ball defense and also three Antwerp players collapse onto Iverson when he did eventually catch it in the paint.

The outcome was a strong start for the young Belgians. They held Tenerife to 38% shooting in the first quarter and just 3/8 from inside the 3-point line. The energy on the court and in the crowd was that of belief. There were, however, warning signs already. A team like Tenerife has veteran players that adjust and so many shooting weapons. When you collapse and take away the paint as Antwerp did, you must leave shooting opportunities, and the next clip you see that the Canarians had already started to find them - Pierre-Antione Gillet doing his best to make sure at least one Belgian made the Final.

Early in the second, we saw another perfect example of Txus Vidorreta finding ways to adjust.

.@CB1939Canarias run an empty corner Spain Pick and Roll to perfection. Watch Davin White set the back screen. Nobody to help in the corner and @Colton_Iverson gets the dunk when Dudzinski leaves to help! #BasketballCL #FinalFour pic.twitter.com/YGgJ7CYCXK

If you contrast that to the way Antwerp was able to collapse and shrink the floor against the same action in the first quarter, you see how important that tweak of emptying the ball-side corner was.

This Antwerp team is anything but a lie-down-and-die squad. They also have a coach in Roel Moors very capable of designing actions to get his players an advantage. In the second quarter, Tenerife made a run but twice we saw Moors go to a 45 pick-and-roll with a big-to-big ball screen for Tate. Both times Tenerife switched and Tate was too much to stop going downhill on both occasions.

The Tenerife train still just kept on rolling regardless. Despite Antwerp's best efforts, the half ended with a 31-26 lead for Vidorreta's squad, and more ominously the Canarians were shooting 40% from three after exploiting the space left by Antwerp collapsing into the paint.

The third quarter was a much closer period, with the team's scoring even at 16 apiece. ButTenerife's adjustments were starting to tell and Antwerp's inexperience starting to show. All season long, when we have seen Tenerife need to create something, they have thrown it to Javier Beiran in the post. From the left block especially, Beiran can make his own shot or kick to shooters. The tactic of playmaking from the post proved to be old reliable again.

💫 Who is wearing Yellow, #33 and got a nice hook shot? That's right Karee... I mean Javier Beiran! #BasketballCL #FinalFour

After the game, both Javier Beiran and Nicholas Richotti spoke about how important it was to stop Paris Lee. Tenerife chased and denied Lee on every catch and had a long arm up on all of his favorite shooting looks in the pick-and-roll. Lee was held to 0/5 from behind the arc. The young Point Guard has been on a steep learning curve all season and this was certainly another slope to climb. He was, however, still able to impact the game as a creator with four assists.

The play in the clip below is classic Lee and also classic Roel Moors. Watch how Antwerp have Lee set a "Ghost" screen and pop, just to get an easy catch on the wing. Tenerife switched, but Beiran was then run into a screen and re-screen. Lee gets downhill, Kalinoski empties the corner (as we have seen all season) and the pass to Bako for the lob was inch-perfect (as we have seen all season).

Champions find ways to win. With so many of the 2017 Championship squad returning for Txus Vidorreta's Tenerife, it started to feel inevitable that Antwerp's dream was coming to an end the fourth quarter. Coach Moors tried almost everything - he went to a super big lineup with three bigs and Vanwijn at the three, and he also tried going small and switching. Nothing seemed to stop the metronomic rhythm that Tenerife played with. All that was left was to deliver the killer blow.

That blow came early in the fourth. On a baseline out-of-bounds, you see a blur of yellow movement and screens. Brussino's cut to the ball drew Bako from Iverson, then San Miguel cleared the lane for Iverson to catch it going to the rim. The outcome is two Free Throws. When Iverson pulled the rebound from his own miss, Brussino nailed another 3-pointer and one possession yielded 4 points. Even with seven minutes left in the game, Tenerife was always in control from there.

The stats paint a curious picture. If you didn't know the final score and read a stat sheet that said Iverson and Abromaitis were held to a combined 10 points, with Antwerp rebounding 43% of their misses on the offensive glass, you would be unlikely to expect a blow out win for Tenerife. The thing is this Tenerife team is deep, especially on the wings and they always find the player(s) with an advantage. In this case, it was Nicholas Brussino and Javier Beiran with 17 and 14 points respectively.

The contribution of the Belgian Gillet with 11 points personal was also vital as he went 3/4 from deep. Gillet will be the only Belgian in the final but he can also expect to have more than his own family there to support him. The scoreline also paints a picture of a dominant defensive display from Tenerife (and it was) but the fact that they were able to overcome a slow start and score at a rate of 110 points per 100 possessions was more decisive, When you score regularly, every stop only adds to the pressure on your opponent. For a young squad like Antwerp, that pressure told.

For Antwerp, the story doesn't end. They still have to pick up and learn from this. Third place would be a just end for an incredible season, but in their way is another veteran squad in Brose Bamberg. There will be nothing given and more opportunities to learn from competing against the likes of Rice, Zisis, Hickman, Harris, and Rubit. 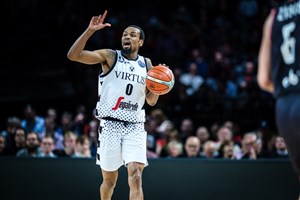