I'm not the one to tell tales of my travels, I've lost so many books on my connecting flights that they probably have the Igor Curkovic Lost & Found Library somewhere around the Vienna airport, and the thought of having to be away from my family for a couple of days hurts my soul and my body more than the horrible bus chairs or no leg room on planes.

But times are a-changing, people. Season 3 of the Basketball Champions League is here to prove that there are people who actually can't wait to get on the road.

Week of the Roadies

Now, here's a list of the big away wins we already had this season:

The last five in that list all happened this week, provoking the pondering on the home court disadvantage. Is the home court advantage really gone? Are the planes now so comfortable and the pre-game rituals so easy to go through that you don't feel like you're on the road at all? Are the players really so much tougher mentally than in the previous decades of this sport?

Or, is the answer something much more simpler, like Don Nelson suggested, per Cleveland.com:

"We drank more beer," the NBA's winningest coach joked. "We had more fun on the road because you didn't have to worry about home life and all that kind of stuff. You were out amongst your friends so that was always fun."

That actually makes sense. But, on a more serious note...

"I always preached to the team to take care of the details more on the road. You just couldn't expect any breaks on the road. You had to do everything more perfectly and more focused on the road. Which is pretty easy to do, actually," Nelson offered.

Want more focus on the road? Just kiss. Not kiss-kiss, but keep it short and simple, like this clutch Promitheas fastbreak to stay in touch with Neptunas:

Want stuff done more perfectly? Draw up plays for guys who have been playing so long together that J'Covan Brown tosses it up even before Josh Owens slips the screen and goes in for the alley-oop dunk:

Want the no-breaks part? Go for the strong finishes and the dunks, don't expect you'll have an easy layup or that you'll be given the benefit of a doubt on a 50-50 call by the refs:

Don Nelson was right. This really is pretty easy to do, actually. As easy as opening those beers and enjoying that book from the Igor Curkovic Lost & Found Library.

Of course, the story of winning on the road was bound to hit a roadblock somewhere, and it had to be in Italy. Nanterre defeated Venezia in Venice to give France a 1-0 lead in the neighborly triple-header, but Azzurri bounced back with Avellino winning in Le Mans to make it 1-1.

And then, it was up for Kevin Punter to do Kevin Punter things. Bologna defeated Strasbourg, Punter set his Basketball Champions League career-high with 6 three-pointers in a game, and with 26 points on the night he kept his own little streak going.

Punter is now the guy who scored in double figures in 25 of his 26 Basketball Champions League games with Rosa Radom, AEK and Virtus, and the only game in which he failed to reach 10 points was the one when he scored 9.

In other words, he's the kind of guy who will spoil your plans even if you were focused and executed everything perfectly on the road, like Strasbourg have done on Wednesday. He was the roadblock in Bologna.

Rather than just selecting All-Star Five kind of team, allow me to select an actual team as the team of the week. This time, it has to be Hapoel Bank Yahav Jerusalem.

I'm not all that religious, but my own curiosity somehow paved the way to Psalm 137, and Matisyahu song helped me remember it to this day, and hit the play button as Jerusalem rose to 5-1 in their first Basketball Champions League, with a sublime performance against Bamberg.

📽🍿 @j_cowens is a highlight machine!

Tamir Blatt usually does the distributing, but he had 8 points early on to wake the team up in Germany. Amar'e Stoudemire had 11 points in a hurry, James Feldeine put up 18 points and 6 assists, TaShawn Thomas and Josh Owens are probably still in the arena dunking, and J'Covan Brown proved to be a rock on the defensive end every time Bamberg thought they had a mismatch with him on the low block. They didn't.

Now, I know I picked Tenerife, Neptunas, Antwerp, AEK and Strasbourg as my TOTW's, even though Jerusalem probably deserved to be here, too. Almost like I forgot about them. Well, if it happens again, Jerusalem; if I forget you - let my right hand forget what it's supposed to do. 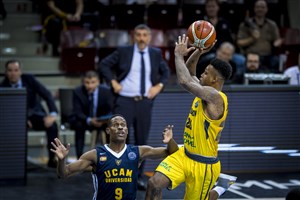