Here is a round up of all the Gameday 4 action - you can also find the report of Neptunas Klaipeda's win over SIG Strasbourg here, and Le Mans' victory over Ventspils here.

Banvit kept their perfect home record intact with a 78-60 win over Nizhny Novgorod, who were unable to overcome the absence of Kendrick Perry and Vladimir Dragicevic.

Trailing at halftime, Banvit took charge in the third, leading by 7 heading into the fourth, where they started the period on a 13-0 run to get a comfortable cushion and never looked back.

Nineteen year old Sehmus Hazer led the home side with 17 points, and Alex Perez had 15 points, 4 rebounds and 5 assists. Devin Oliver made up for an 0-for-8 shooting night with 15 rebounds.

Ivan Strebkov had 12 points, 5 rebounds and 6 assists to lead Nizhny.

Notable Number: 26 - the number of points Banvit score on the break, as they got out and running.

CEZ Nymburk picked up their first win in the Basketball Champions League with an 82-74 victory over Telenet Giants Antwerp at home on Wednesday.

In a game that featured multiple lead changes, Nymburk reeled off a 9-2 run in the final minutes to take control, before Vojtech Hruban knocked down the dagger three with 49 seconds remaining to snuff out any final hopes of an Antwerp comeback.

Paris Lee went 4-for-8 from three for 16 points to lead Antwerp, whilst Ismael Bako hauled in 13 rebounds.

Notable Number: 34 - the number of points Nymburk converted off of 16 Antwerp turnovers.

Promitheas Patras became the first Greek team to beat Besiktas with a 80-72 win at home, as they remain undefeated in Group D at 4-0.

.@PromitheasBC became the first 🇬🇷 team to beat @BJK_Basketbol in the #BasketballCL and in doing so remained undefeated in Group D at 4⃣-0⃣!

In a game that featured sixteen lead changes, Promitheas turned it on when it mattered, pulling away in the final six minutes behind Nikos Gkikas who had 10 of his 17 points in the final five minutes.

Notable Number: 7 - the number of players that saw the bulk of the minutes for Promitheus, as  Makis Giatras kept his rotation short.

Brose Bamberg secured a hard-fought 82-77  win over Lietkabelis behind some late-game heroics from Tyrese Rice.

Rice had 9 of his 23 points in the fourth quarter, including a clutch one-footed fadeaway jump shot that broke a tie with 39 seconds remaining. Rice added 6 assists, who then capitalised on a Mindaugas Kupsas turnover that saw Elias Harris steal the ball.

Augustine Rubit had 19 points on 6-for-8 shooting, including some big free throws down the stretch, as Bamberg improved to 2-2.

Jamar Wilson had 15 points to lead Lietkabelis and Saulius Kulvietis had 14.

Notable Number: 30 - the number of lead changes, as it was clear the game would go down to the wire from the opening tip.

Iberostar Tenerife used a late go-ahead three-point play from Tim Abromaitis to hand Umana Reyer Venezia their first defeat of the season, 72-65, in a battle of two previously undefeated sides.

With the score tied at 65 with 42 seconds remaining, Abromaitis grabbed the offensiv rebound and put it back in whilst getting fouled to give his team a three point advantage. From there, Tenerife went 4-of-4 from the line for the final margin, as Venezia would not score again.

Thad McFadden led Tenerife with 21 points, and Colton Iverson joined him in double figures with 10.

MarQuez Haynes' 19-point effort for Venezia would not be enough, as they dropped to 3-1.

Notable Number: 7 - the number of points Tenerife were held to in the third quarter, making their victory all the more impressive.

Hapoel Jerusalem made light work of Fuenlabrada, with a 107-75 dismantling in Spain, with a vintage performance from Ama're Stoudemire.

Stoudemire went 10-of-16 from the field for 24 points and 7 rebounds in just 13 minutes, Da'Sean Butler missed a single shot on his way to 20 points and 9 rebounds, whilst James Feldeine had 15.

Christian Eyenga led Fuenlabrada with 14 points, whilst Talib Zanna was the only other player in double figures for the Spaniards with 10 points.

Notable Number: 24 - the number of offensive rebounds Jerusalem finished with, as they dominated the glass, 54-24, for 31 second chance points. 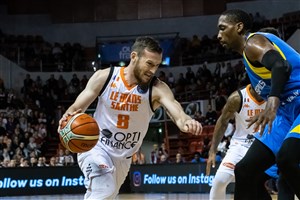 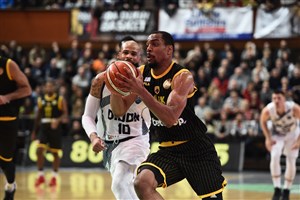