ZAGREB (Croatia) - We're growing up. And in Season 3, that also means we can do a lot of comparing to Seasons 1 and 2.

So, when a certain James Feldeine ties Khalif Wyatt's season-high with 35 points, and Charlon Kloof sets a new mark with 7 steals, I can do my thing and dig through the archive to find all the numbers you need to know.

And just like every disaster movie begins, I'm putting the miner's helmet on, turning the little headlight on, and encouraging you to follow my lead. What could go wrong, right?

The highest mark for points scored in a Basketball Champions League game was set by Jimmy Baron. Neptunas' sniper single-handedly dismantled Muratbey Usak Sportif on December 6, 2016, putting up 42 points, hitting 10-of-15 three-pointers - which is also a record for 3PT FG made.

Baron had 29 in the first half, provoking the aforementioned quote by Jeff Taylor, a.k.a. the Voice of International Basketball.

CSM CSU Oradea's Martin Zeno also had 42, against Kataja on January 18, 2017, and this will now turn into a weird Rion Brown story because I love that guy and I have to mention him every chance I get because Brown knocked down a deep three-pointer to send the game to OT, giving Zeno five more minutes to tie Baron's record.

And Rion Brown had a 40-point game himself that season, which happened on the same day when Baron was tormenting Usak! Rion was Iron like Lion in Zion against Maccabi Rishon LeZion, good luck reading that sentence out loud...

Rion Brown was the author of a MONSTER night for @KatajaBasket scoring 40pts (9/13 3pts) and grabbing 7reb! 😈 🔥 #BasketballCL pic.twitter.com/eB5aYP3WqM

Reynolds and Ellis back to protect their records

Babacar Toure of Fribourg Olympic and Darion Atkins of UNET Holon grabbed season-highs of 16 rebounds, but they were still not close enough to challenge the all-time number of Keith Clanton. PAOK's big guy pulled down 19 boards, which means we are still waiting for the first ever 20-20 game in the Basketball Champions League.

DeVaughn Akoon-Purcell came agonizingly close to it with 20 points and 18 boards for Bakken Bears against the Helios Suns two seasons ago. In a movie-like twist of events, Akoon-Purcell will be up against Suns again this season, too, but the ones of Phoenix, in the NBA. Yep, there's a route from Denmark to the Denver Nuggets, I'm not going to stop reminding you about it.

Anwil's Kamil Laczynski has been the archetype of the pass-first point guard, but his 14-assist outing against MHP Riesen Ludwigsburg is short of the all-time high.

Scottie Reynolds dished out 17 assists while wearing Cibona's shirt away at Mornar Bar on January 3, 2017. Reynolds returned to the Basketball Champions League, maybe somebody told him about Laczynski, so Olimpija's PG came back to protect the record...

Speaking of Mornar Bar, current Promitheas man Octavius Ellis is still the man with the most blocks in a single game. That happened on November 2, 2016, when Mega Bemax visited Mornar, and got rejected 7 times by the octopus named Ellis. Sean Denison of CSM CSU Oradea also had 7 blocks in a game, against Maccabi Rishon LeZion - yes, some clubs just keep on reappearing here...

Don't stop until the clock says 0.0

Finally, we're in the last of the big five stat columns - the steals. Charlon Kloof has done a bit of everything for UCAM Murcia this week, protecting their perfect record in the Basketball Champions League, and in a 19-point game, it felt like his buzzer-beating halfcourt shot was the decisive one against Anwil.

🇳🇱😳 Kloof doing it all! #BasketballCL

See, Kloof is that kind of a player. Electrifying. He just needs a spark to ignite, and sometimes, a buzzer-beater or a dunk is the plus that the minus needed to complete Kloof's electronic circuit.

All of a sudden, you see nobody else but UCAM's guard on the floor. He's everywhere, finishing with 15 points, 5 rebounds, 5 assists and a Basketball Champions League season-high of 7 steals. He needed just one more to tie the all-time high that Jeremy Leloup set last season, former SIGman, and current JDA Dijon leader stole the ball 8 times when he played against Petrol Olimpija on October 11, 2017.

Rather than just selecting All-Star Five kind of team, allow me to select an actual team as the team of the week. This time, it has to be SIG Strasbourg! The French side had their fair share of late game comebacks last season, but this one was epic.

Strasbourg were down 73-63 with just over four minutes left in the game, but they pulled off a 20-5 run to finish Promitheas off, handing them their first defeat of the season. SIG had it all, hot shooting of Nicolas Lang, amazing defensive effort by the 19-year-old Ludovic Beyhurst, and the experienced guys took over late in the game.

Mike Green, Ali Traore and especially Jeremy Nzeulie all had clutch plays to send this one home. Or keep it there, really. With Jarell Eddie joining the team now, Strasbourg could be the team to beat, not just over here, but also in the French Jeep Elite League.

Oh, and don't be surprised if Jarell is the one to clear some of the record-holders here. 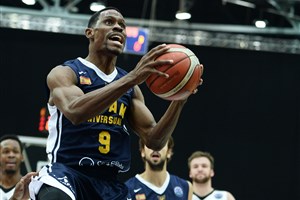