LJUBLJANA (Slovenia) - Issuf Sanon was not really on many talent observers’ radars ahead of the FIBA U18 European Championship 2017. But a breakout performance there for Ukraine started a whirlwind chain of events that led him to being drafted by an NBA team, moving to a Petrol Olimpija team full of NBA talents and playing an NBA-like schedule.

Olimpija have taken their lumps this season in the Basketball Champions League - though they have played very well at times. But with a team as young as the one from the Slovenian capital of Ljubljana, those highs have also been accompanied by lows, resulting in a 1-10 record thus far as the Regular Season nears its end.

One of those young talents who has seen his shares of highs and lows has been Sanon, a 19-year-old Ukrainian who joined the club in the middle of last season and is averaging 5.4 points, 2.1 rebounds, 2.1 assists and 1.3 steals in the BCL.

“We struggled at the start no doubt. A lot of new players, new rotations, but no excuses. We did not play good enough,” said Sanon, who shined with games like 14 points and 2 assists against SIG Strasbourg and 12 points, 3 rebounds and 5 assists versus Promitheas Patras.

Part of those struggles could be attributed to a schedule that even NBA teams would be impressed with. Olimpija have played 39 games this season in the Basketball Champions League, Adriatic ABA league and Slovenian KBM league. As a comparison, most of the NBA teams have played 45 games thus far.

“Personally, I love it,” Sanon said. “We are almost playing an NBA schedule. A game every 2-3 days. It tests your focus and you always have to take care of body and try stay fresh and ready. It’s one of the benefits of playing for this club.”

Another benefit is playing with guys Sanon might be playing with or facing one day in the NBA. The 19-year-olds Luka Samanic and Marko Simonovic are both highly regarded by NBA observers while Blaz Mesicek and Roko Badzim are two 21-year-olds with solid upsides in Europe.

“We are stacked with young talented players. We probably have more NBA prospects than any club in Europe,” Sanon said. “We all get along great and try and help each other as much as possible and the older guys on the team also really help us younger players.”

44th pick of the draft

While Samanic and Simonovic both have legit chances of being drafted in the near future, Sanon already has that step of his career behind him after being selected with the 44th pick of the 2018 NBA Draft by the Washington Wizards.

“Being drafted by Washington was a dream come true,” said Sanon. “It was a great feeling when my agents called me to tell me that Washington drafted me.”

Sanon said coming back to Europe was the right decision.

“I need to work on everything. My outside shot needs to be more consistent. I need to continue to read the game and grow as a point guard,” he said. “They were very happy with me in Washington and they even came to Europe at the start of season to work with me in Slovenia. I will continue to improve on all of my game.”

Sanon’s first real blip on radars of talent observers from the NBA - or most scouts outside of Ukraine for that matter - came at the FIBA U18 European Championship 2017 in Slovakia, where he made his international debut.

And it was a loud one.

He averaged 19.3 points per game along with 6.1 rebounds, 2.7 assists, 3.4 steals and 1.1 blocks - and doing so with thunderous dunks and nasty blocks, all the while sporting a big thick mane of hair.

“This was a good tournament for me. I played okay and that tournament is the reason I had interest from clubs outside of Ukraine,” said Sanon, who in January 2018 moved from Ukrainian club Dnipro to Olimpija on a four-year contract.

War forces family out of Donetsk

The move to Slovenia was the second time that Sanon picked up and left - and this time was under much more pleasant circumstances. In 2014, war broke out in Sanon’s home city of Donetsk and forced the family to flee - and also separate. Sanon and his father moved to Dnipro while his mother and older brother moved to Kiev.

“I really wanted to play basketball and this love helped overcome all the difficulties,” Sanon said.

It was additionally difficult leaving his brother Mikhailo, who was the reason he became interested in the game in the first place.

“I started when I was 8-9 years old. My brother was playing basketball so of course I wanted to do the same thing,” Sanon said of his brother, who played one year professionally for the club in Donetsk.

“I REALLY WANTED TO PLAY BASKETBALL AND THIS LOVE HELPED OVERCOME ALL THE DIFFICULTIES.”- Sanon

Basketball was not the only sport that Sanon played though.

“I played tennis, but I stopped when I was 14 years old because basketball needed all of my attention,” he said.

Sanon gets his slightly darker complexion and thicker black hair from his father, a native of the West African country of Burkina Faso.

“My parents met in Donetsk when my father studied there at the university. Now he is back to Burkina Faso and works there. I was there only once for a visit and met with my family and five cousins,” Sanon said.

And while it was his brother Mikhailo that got Sanon into the game, the explosive guard’s basketball role models vary quite widely.

“I look up to Slava Medvedenko for guidance and advice,” Sanon said of the former Ukraine international, who played for the Los Angeles Lakers and Atlanta Hawks in the NBA. “Today, I really like to watch Russell Westbrook and John Wall - athletic and aggressive point guards like me. But I also like to watch Luka Doncic because he has great basketball brain.”

First half is about to end, the clock is ticking, what to do?

Sanon also likes the point guard skills of Emmanuel Mudiay and the confidence of Danilo Gallinari - besides just the legendary abilities of Michael Jordan and LeBron James.

But unlike many top young players, Sanon has often emphasized that he really likes going at it on the defensive end of the game.

“I love playing defense. It is the strongest part of my game,” he said. “I know I can score the basketball, but my goal is to change the game on the defensive side of the floor.”

All in all, Sanon is just a baller.

When asked what his favorite part of the game is, Sanon answered: “It is hard to choose one part. I love basketball and I could stay in the gym all day and all night.”

Lining up for Ukraine

Sanon’s performance this season gained him a nomination for the Ukraine senior national team for the FIBA Basketball World Cup 2019 European Qualifiers fifth window in November and December.

“This was really great experience for me. I have wanted to play for senior team for a long time so I was very happy,” Sanon said about being called into Yevgen Murzin’s team for the Group I games against Slovenia and Spain.

Sanon tallied 11 points, 2 rebounds, 1 assist and 3 steals in 15 minutes against Slovenia in Zaporizhia. Besides being a game at home, the showdown with Slovenia was extra special for Sanon because he was facing current or former Olimpija teammates Blaz Mesicek, Gregor Hrovat and Mirza Begic.

“To play against Slovenia and some of my teammates was funny but I am happy we won the game,” Sanon said of the 82-54 victory before offering a laugh and adding: “I keep reminding them every day.”

Ukraine are still alive in the fight for China 2019 and Sanon thinks it would be a major deal for the country if they can qualify for back-to-back FIBA World Cups.

“This is really important thing for our country and for me. I hope we can make it to China. We have lot of talent and I believe we can do it.”

Every week facing another great guard

Playing in the Basketball Champions League is a great training for Sanon as he prepares for bigger things. Every week the young talent is facing a high level of guards in Group D such as Tony Taylor, Kevin Punter, Nikos Gkikas, Rion Brown, Jason Rich, Lorenzo Williams, Kyle Weaver, Mike Green, Mardy Collins and Kassius Robertson. 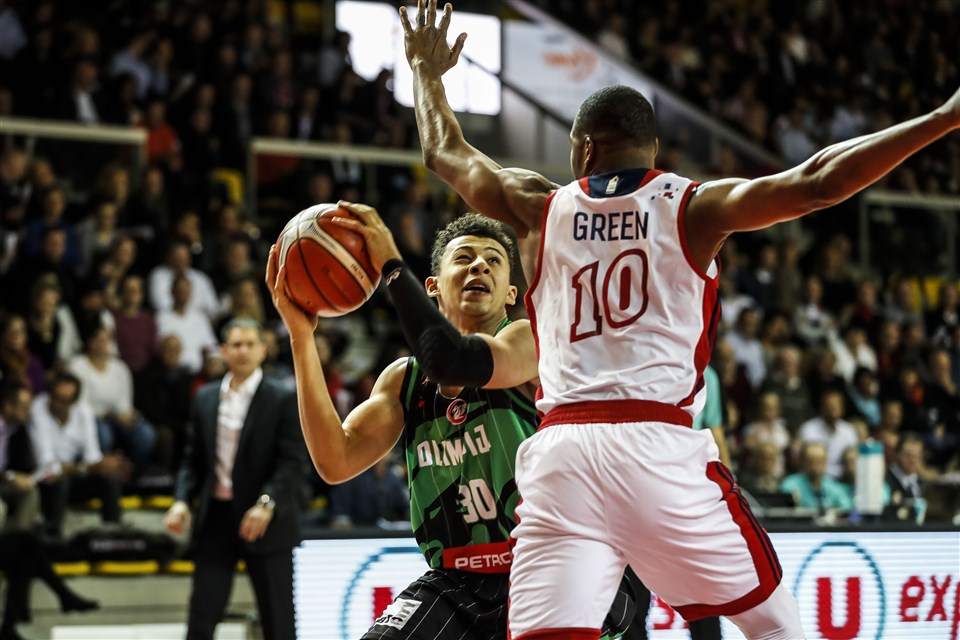 “Every game, I am playing against really talented players at my position,” Sanon said. “You always have to be ready and you always need to attack. They are all older than me with more experience so I try and work harder than everyone so that my energy changes the game.”

He continued: “It’s really a great league. There are no easy games. I just need to continue to improve every game and hopefully we will win some more games.”

“EVERY GAME, I AM PLAYING AGAINST REALLY TALENTED PLAYERS AT MY POSITION. YOU ALWAYS HAVE TO BE READY AND YOU ALWAYS NEED TO ATTACK. THEY ARE ALL OLDER THAN ME WITH MORE EXPERIENCE SO I TRY AND WORK HARDER THAN EVERYONE SO THAT MY ENERGY CHANGES THE GAME.”- Sanon

Olimpija have only collected one win thus far but in the last four games Sanon and co. have come back from a 14-point deficit against SIG Strasbourg to take a lead, built a 16-point lead on Promitheas Patras, pulled ahead by 14 points on Segafredo Virtus Bologna and found themselves up by 11 points on Filou Oostende. But the youngsters ended up not rewarding themselves and lost all four of those contests.

Winning is a learning process and Olimpija is really close to getting victories in the Basketball Champions League - something Sanon knows.

“We know we are a young team but I believe we have the talent to win games. We are playing better basketball now so I think we will win a lot more,” he said.

Thanks in part to playing an NBA-like schedule with NBA talent. 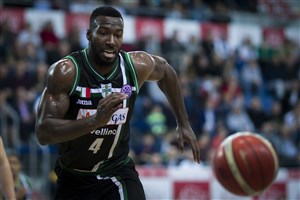 Will Avellino qualify for the Play-Offs? Everything you need to know before Tuesday's games 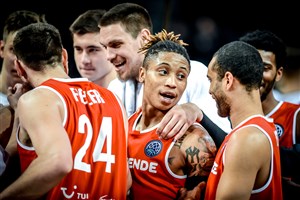