NANTERRE (France) - Give Nanterre coach Pascal Donnadieu credit. He knows a terrific player when he sees one. Last season, in Nanterre's two victories over Telekom Baskets Bonn in the Basketball Champions League Regular Season, Julian Gamble was that player.

He was the German club's tall center, a low post scorer and also a rim protector. In one of their meetings, which was played on January 24 earlier this year, Gamble had 3 steals and 2 blocks to go with his 21 points and 6 rebounds for Bonn.

Donnadieu lured him to France to play for his team this season and after a slow start, Gamble has been every bit the player that Nanterre needed and more. After a 17-point, 9-rebound performance on Gameday 5 in a hard-fought 96-87 triumph over Fribourg Olympic, Gamble hit the road for a far tougher test at Umana Reyer Venezia this week and led his team to a 99-87 win.

“I HAD SOME STRUGGLES EARLY ON TO GET INCORPORATED INTO THE OFFENSE. BUT NOW IT’S GOOD, AND EVERY POSITION ON OUR TEAM CAN SCORE SO THAT MAKES US DANGEROUS.”- Nanterre center Julian Gamble

.@TheRealJG45 patrolled the paint vs Reyer Venezia, recording 28PTS & 11REB in a big W on the road! #BasketballCL

He walked off the court with a +34 efficiency and has, not surprisingly, been named as the Gameday 6 MVP.

"You don’t play for the accolades, you play for the win," Gamble said. "But when it comes, you're grateful. The opportunities that come my way, I try to make the most of them."

What Gamble wanted to talk to the Basketball Champions League website about more was the game, and the importance it had on Nanterre's season. The French club has been trying to overcome a tough beginning in the competition and survive in a very difficult Group B.

Nanterre started with a 74-67 defeat at Czech side Opava, a team that hasn't won since. Next followed a 75-58 drubbing at home to Iberostar Tenerife, the winners of the first edition of the Basketball Champions League.

“VENICE HAS BEEN PLAYING ONE OF THE BEST BRANDS OF BASKETBALL THIS SEASON IN EUROPE SO TO GO THERE, PUT IN THE PERFORMANCE THE WAY WE DID AND IN THAT ENVIRONMENT IS GOOD.”- Gamble

"Tenerife gave us trouble," Gamble said. "The first half of that game, we weren’t able to make shots. They move the ball well, they change defenses and they have veteran guys."

Of their three defeats, though, the most painful was an 83-82 setback at PAOK in Thessaloniki on Gameday 4. Nanterre went in front by seven points in the fourth quarter but ended up losing in excruciating circumstances.

On top 82-79 after Nanterre guard Jeremy Senglin made 1 of 2 free-throw attempts with 14.5 seconds left, PAOK's Thodoris Zaras, who had hit his first 3 attempts from behind the arc that night, attempted to make a fourth straight from more than a meter behind the line but missed. The referees blew the whistle, however, and called a foul on Iceland international Haukur Palsson.

Zaras made all 3 free-throws to tie the game.

After Dominic Waters missed a potential game-winning layup at the death for Nanterre, Gamble was going for the rebound and was called for a foul on Vangelis Margaritis with 0.2 seconds to go. Margaritis made the first of the free-throws for a 1-point win. Nanterre had to be strong mentally on Tuesday in Italy after Waters was ejected. He was called for an unsportsmanlike foul while bringing the ball past midcourt and raising his left forearm, which caught the neck of his defender, Andrea De Nicolao. Waters then argued and was slapped with a technical foul which, coupled with the unsportsmanlike foul, forced him out of the game with an ejection.

But Nanterre held it together and claimed their most important victory of the campaign to improve to 3-3 and stay one spot below PAOK, who won over Fribourg to remain fourth in the Group B standings also at 3-3.

Only the top four sides will advance to the Play-Offs and right now, the 2017-18 champions Iberostar Tenerife are at the top as one of only two unbeaten sides in the BCL at 6-0, with Group D leaders Segafredo Virtus Bologna the other.

Venezia, like UNET Holon, are now 4-2 and just a game ahead of PAOK and Nanterre, with Fribourg and Opava struggling at 1-5.

"Venice (Venezia)  is a really, really good team," Gamble said. "We had a lot of adversity with a teammate being thrown out and on the road so it’s a great feeling to win.

"Venice has been playing one of the best brands of basketball this season in Europe so to go there, put in the performance the way we did and in that environment is good."

Gamble is also glad that fans and family can follow his games by watching livebasketball.tv. He says there is a lot to like about the competition.

Change, accepted.. Adversity, expected.. Blessings, receptive Can’t thank God enough for 29 years of life and his never ending love and grace! I’m still learning, growing, and progressing in all areas of life. The loved ones I have around me make this entire journey worth it and I’m forever grateful for their presence. Here’s to another year that will be undoubtedly better than the last.. 🙏🏽

"It’s great this year when you look at the teams that have so much tradition and the history that are in the BCL and the way things are televised, it gives fans and family back home a chance to watch us."

Gamble also has a genuine appreciation for how tough it is to make the Team of the Week as he has, and also to receive the MVP honor.

"I’ve been passed over many times and that served as motivation for me," he said.

What consumes him now is winning games. He desperately wants to help bring success to Nanterre this season.

Gamble says things are looking up for Nanterre.

"I had some struggles early on to get incorporated into the offense," he said.  "But now it’s good, and every position on our team can score so that makes us dangerous.

"Now that we are finding our flow, we're getting better. Our ambitions are high." 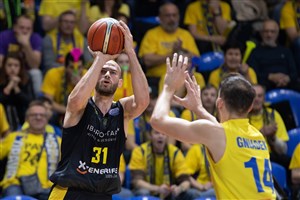 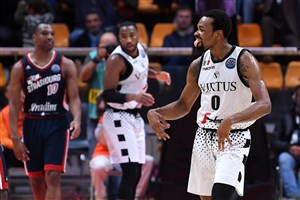