White team is in transition and Red 30 is creating obvious illegal contact on White 55 in White’s back-court. Red 30’s contact is unnecessary and also is not a legitimate attempt to play the ball. Therefore, the illegal contact should be called as an Unsportsmanlike Foul on Red 30.

White 11 drives to the basket and Blue 88 tries to stop him. Blue 88 jumps forward (visible in the replay) and creates an illegal contact on White 11. A defensive foul should be called on Blue 88 in the act of shooting and 2 free throws awarded to White 11.

Blue 4 goes to the basket in the semi fast break. When he tries to shoot the ball, defensive player Black 1 blocks the shot. In the replay, it is visible that Black 1’s attempt to block the shot is illegal, as hitting clearly to the hands of Blue 4, and a defensive foul should be called and 2 free throws award to Blue 4.

White 2 drives to the basket, and after he has jumped off, defensive player Blue 17 moves laterally creating a contact when White 2 lands on the floor. This is an illegal contact by Blue 17 and a blocking foul should be called on Blue 17 and 2 free throws awarded to White 2. An opponent may not move into the path of a player after the player has jumped into the air.

Yellow 1 drives to the basket at the end of the 3rd period. He releases the ball for the shot and, after that, crashes on Blue 13 and then the red led light around the backboard indicates that the period has ended. Referee calls an offensive foul on Yellow 1 and because Yellow team has already more than 4 team fouls, 2 free throws is awarded to Blue 13. Referees can use the Instant Replay System to define if the foul was committed before the led light appeared and if any time should be re-set to the game clock (in this case 0.4 seconds).

Blue team is moving the ball in the front-court and defensive player Black 12 get injured (game clock 3:41). After that, Blue team has 3 shots and two offensive rebounds and finally Black team advances with the ball to their front-court. If the ball is live when an injury occurs, the official shall not blow his whistle until the team in control of the ball has shot for a field goal, lost control of the ball, withheld the ball from play or the ball has become dead. If it is necessary to protect an injured player, the officials may stop the game immediately. In this play, referees should stop the game after the shot and rebound by Blue team (game clock 3:37) and substitute the injured player. The ball should be awarded to the Blue team for throw-in, having 14 seconds in the shot clock. 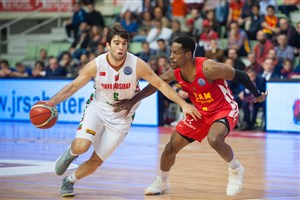