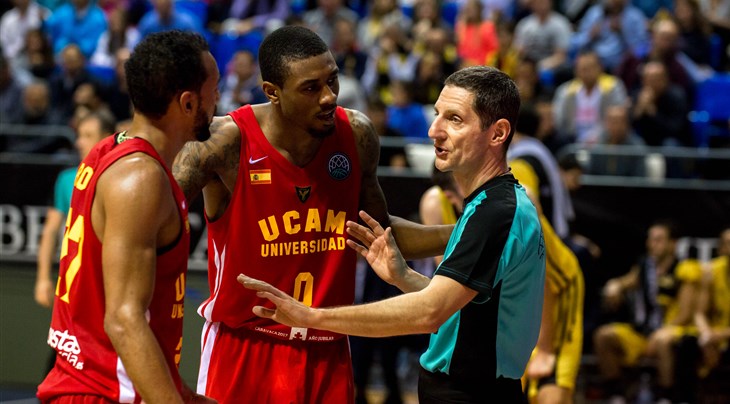 Yellow 19 has the ball in the key and makes a shot for the field goal when a fouled is called on Blue 4. After the ball has touched the ring and has still a chance to enter the basket, the defensive player Blue 12 touches the ball. No player shall touch the ball after it has touched the ring while it still has the possibility to enter the basket, when an official blows the whistle while the ball is in the hands of a player in the act of shooting, or the ball is in flight on a shot for a field goal or on a last or only free throw. A basket interference violation should be called on Blue 12, the offensive team awarded 2 points and Yellow 19 should be awarded one free throw.

In the fast break, Green 5 is going to the basket. Defensive player White 15 runs behind and creates an illegal contact on the face of Green 5. The action is not a legitimate attempt to play the ball (C1) and, at the same time, a hard excessive contact (C2) and an unsportsmanlike foul should be called on White 15.

White 14 is about to make the shot in the key. Defensive player Green 8 grabs White 14’s right arm and continue to hold firmly. The action is a hard excessive contact (C2) and an unsportsmanlike foul should be called on Green 8.

Grey 1 drives to the basket and defensive player White 88 is late and reaches out with his right arm creating an illegal contact. The action is not a legitimate attempt to play the ball (C1) and an unsportsmanlike foul should be called on White 88. Because the foul was committed during the continuous motion of Grey 1, a field goal and 1 free throw should be awarded to Grey 1, followed by possession of the ball for throw-in by the Grey team.

Grey 15 jumps off the court to save the ball going out-of-bounds. Grey 15 grabs the ball with both hands creating a new team control by Grey team in their front court. The ball flies close to the mid-court line where Grey 1 catches the ball and, after that, steps to the backcourt with his right foot causing the ball to return to their backcourt. A team in control of a live ball in the frontcourt has caused the ball to be illegally returned to their backcourt if a player of that team is the last to touch the ball in his frontcourt, and the ball is then first touched by a player of that team who has part of his body in contact with the backcourt. A backcourt violation should be called. Power Rankings: Monstars back on top, Germans right behind them, AEK & SIG as close as they get 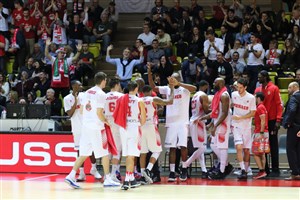