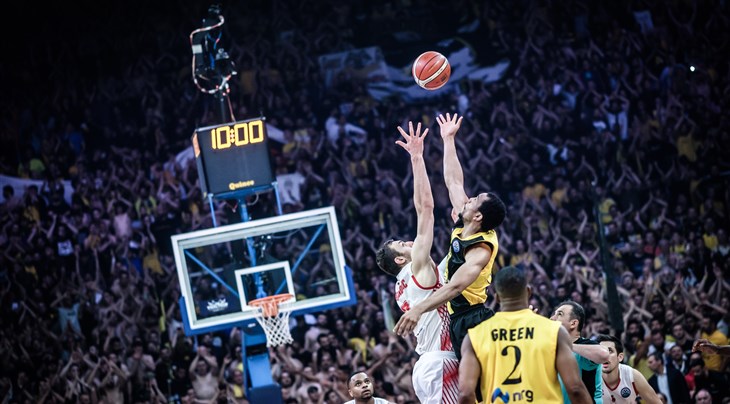 ATHENS (Basketball Champions League) - They have only gone and done it...... Very few people outside of Athens predicted AEK to be a serious threat in the Play-Offs - they were proven wrong. Not many people believed AEK would be able to consistently generate efficient shots with such a high volume of 1v1 possessions - they were wrong. Very few people predicted AEK to be European champions - ... well you get the picture. This is a team that has answered every question thrown at them. And now they have answered the final question. Coming into the Semi-Final, the talk was about AEK's ability to keep UCAM Murcia off the glass. Then coming into the Final, it was about AEK's ability to score against AS Monaco's league-leading defense. Instead, it was all about AEK in both games. The Greek club controlled tempo and sucked their opposition into a game of adjustments and counter adjustments, all weekend. The Queen - and their excellent coaching staff - consistently managed to maximise the talent on their roster and take away their opponents' best weapons.

Vitor Benite and Sergii Gladyr are both outstanding players, but neither had been primary scoring options for their respective teams in the lead up to the Final Four. AEK were so successful at reducing the impact of their opponent's best scorers, without both men stepping up - in a big way - it's likely that AEK's path to victory, would have been much less dramatic. Then again, that's what AEK do, they force someone else to beat them. And drama, they do plenty of that too.

AEK finished the Final with an Offensive Rating of 135(!) points per 100 possessions. That's ridiculous against any team. Against AS Monaco, it's borderline fantasy. In any other game, AS Monaco scoring at a rate of 127 points per 100, would have been more than enough to lift the trophy. But put simply, they ran into the best offensive, team performance we have seen in the Basketball Champions League - ever. AEK shot 52% from 3-Point range, 51% from 2-point range and 51.6% overall! Outstanding.

As the final scoreline suggests, the two teams were evenly matched in most areas. As expected, Monaco outscored AEK on the break, 22 - 11 but in every other area the difference was a close win for AEK. Maybe the most telling stat was 3-point shooting. Monaco shot 7/19 with AEK flip-flopping it for 9/17 - a 6 point difference, in a 6 point game.

The big question before the game was how Monaco could slow down the League MVP, Manny Harris. The answer was Paul Lacombe. Lacombe had one of the best individual, defensive performances of the season. Manny Harris was held to just 9 Points on 4/13 shooting. If he hadn't collected 5 Offensive Rebounds and scored from put-backs, his scoring impact would have been even more limited. Time and again, Lacombe's ability to stay in front and disrupt Harris' shot, resulted in tough, contested misses. On more than one occasion, Lacombe blocked Harris - this one lead to a fast break and score for Lacombe down the other end.

Mike Green ran the show for AEK in the opening 3Q's and was too much for DJ Cooper. As expected Green wanted to assert himself early. Also as expected, that manifested itself in an early post-up on his opposite number. Aaron Craft did come into the game and cause Green some issues - especially with his ability to fight over ball-screens - but even Craft was taken in the post later in the game. In truth, Green dominated both of his opponents at the PG position.

Delroy James was also a consistent problem for AS Monaco. James loves to face up and use a crossover to bully his way to the rack. On paper, Amara Sy looked a good candidate to stop him but James got to the basket against anyone Monaco threw at him. In the third quarter, Monaco adjusted by backing off and offering James the jump-shot but even then, he got the basket and drew key fouls on Ali Traore.

Maybe the biggest performance for AEK - especially if you consider both games of the Final Four, was Dusan Sakota. AEK's captain had 16 Points in both games and made huge shots when AEK needed them most. In the fourth quarter of the Final, Sakota shot 100%. We probably shouldn't be surprised, he's been doing this all season. But 100% from the field in the fourth quarter of a European Final?

What AEK do as a team on the offensive end, is force you to make impossible decisions. Having a player in Sakota - that just doesn't miss - is a huge part of their ability to do that. Watch this 'Hammer' play from the Semi-Final against UCAM Murcia. Notice how it's Dusan Sakota setting the back screen to get Harris a lay-up.

Then watch AEK run the same play in the Final. Monaco do a great job of blowing up the step-up screen but AEK set the back screen anyway. This time Monaco help off Sakota to stop the lay-up. AEK's captain punishes them (at a really important moment in the game). A certain 2 or a certain 3. You choose....

The thing that really sets this AEK team apart, is their IQ and ability to adapt. For every adjustment that Monaco had for AEK, the Greeks had a counter-punch. From the first possession, AEK wanted to get down hill in the pick-and-roll - specifically from 'Step-Up' screens. Watch as the ball reverses, the big steps up from behind to set a vertical screen. Monaco tried to defend this action with a 'Flat Hedge' from the screeners man. AEK found a way to punish it every time. Watch the first clip and see how Green instantly fires the pocket pass to the roller. With Delroy James cutting the base-line to blur the help coverage, it's showtime and the crowd get excited early. In the second clip Kikanovic is hesitant to cover the same 'Step-Up' pick-and-roll - Green is in attack mode and gets all the way to the rim.

It's not that this 'Flat Hedge' policy wasn't effective at all for Monaco. Lacombe was particularly excellent at fighting over the screen to get back in front of the ball.

Monaco's adjustment in the third quarter was to be much more aggressive in covering this action. Zvezdan Mitrovic instructed his team to trap and 'Hard Show'. The adjustment worked.

With this AEK team however, no single adjustment seems to work for long. Watch this clip and notice that Kevin Punter sees Traore in position early to be aggressive. He declines the screen, now putting Traore out of position and allowing him to get to the rim for the +1.

This is just one example of the chess match that was going on between the two teams. As you would expect, after AEK's hot start, Monaco picked up the level of pressure in their defense. At times picking up full-court and other times set up in a 2-2-1 press, to disrupt AEK's rhythm. This was very effective in forcing turnovers. AEK had only 2 Turnovers at the half and finished the game with 12. AEK's response was cute but extremely effective. On three separate occasions, AEK used Monaco's aggression against them, by drawing fouls on jump-shots. Yes AEK made the most of the contact on each shot, but there was contact and the officials have to call it.

AEK's game management was excellent all weekend. Having an experienced PG rotation with Mike Green and Vasilis Xanthopoulos certainly helped but across the board, players contributed with smart plays. The thing that stands out, is the fact that AEK were essentially in control for most of both games. As Dusan Sakota mentioned, this is a team that has ups and downs, but they always find a way to stop their opponents' runs - Manny Harris collecting 5 Offensive Rebounds, whilst not being able to get his scoring going, is a perfect example of this.

If there was one weakness in game management, it could have been end-game management. In both games, AEK made Turnovers that could have been costly in the final minutes. Monaco's smaller line-up and full court trapping, seemed to catch them off guard. Then again, it's one thing to criticize a team for game management but when you have an atmosphere like that to play in and 50 years of pressure on your shoulders, it's almost understandable that mistakes will happen. Credit also has to go to Monaco for finding a final adjustment to cause AEK problems.

At times in the final 2 Minutes, Zvezdan Mitrovic was substituting offense for defense, with Kikanovic coming in just for the offensive possessions. If it hadn't been for two vital mistakes in the final 30 Seconds, the story could have been very different. I can only write that the atmosphere was impacting both sets of players but if it helps to illustrate the point, just listen to the commentators trying to speak over the volume of the crowd in this end sequence. It would be wrong to end a breakdown of the Final, without crediting the entire AEK club for the atmosphere in the OAKA. That much noise is a tactic in itself. 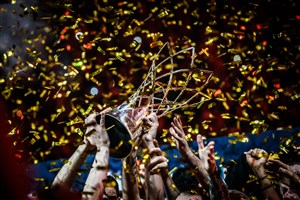 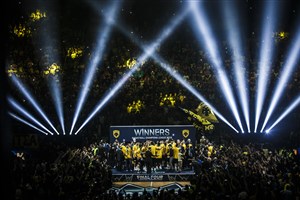