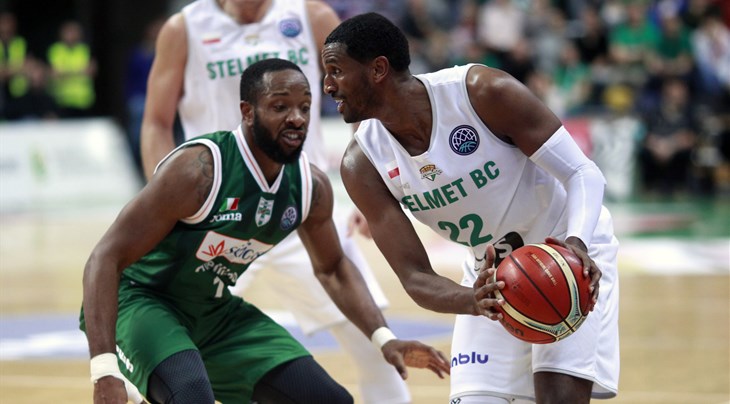 LONDON (Diccon Lloyd-Smeath's Champions League Insider) - In early February, I wrote a column about the outstanding impact that Coach Urlep has had at Stelmet Enea Zielona Gora (ZG). At that point, ZG hadn’t yet finished the job and qualified for the Play-Offs. After some typical Basketball Champions League Drama (a lot of credit has to go to the design of the competition format for all the drama we have already seen), ZG went to CEZ Nymburk on the last game of the season and lost, leaving their fate in the hands of Telekom Baskets Bonn – needing the German club to beat Sidigas Avellino. The German club played their part and ZG are in the Play-Offs.

When it's finally the weekend 😅

In the first column piece, the topic of Thomas Kelati was raised. To be specific, the move made by Coach Urlep to shift Kelati from the starting five, to the sixth man role. The move had a very positive outcome for both the team and the player. On the surface, a move like this, looks like a minor line-up tweak. But it’s worth remembering that a move like this shouldn’t be taken lightly. When you are talking about the professional pride of an experienced pro and his relationship with his new coach, the success of this move reflects very well on the professional attitude of Kelati and the courage and confidence of Coach Urlep. The potential negative side effects in the locker room if this hadn’t been well received, could have been a season-killer. On the flip-side, when the rest of the squad sees one of their key veterans display this kind of team-first attitude, it can only move the culture of the group in the right direction. 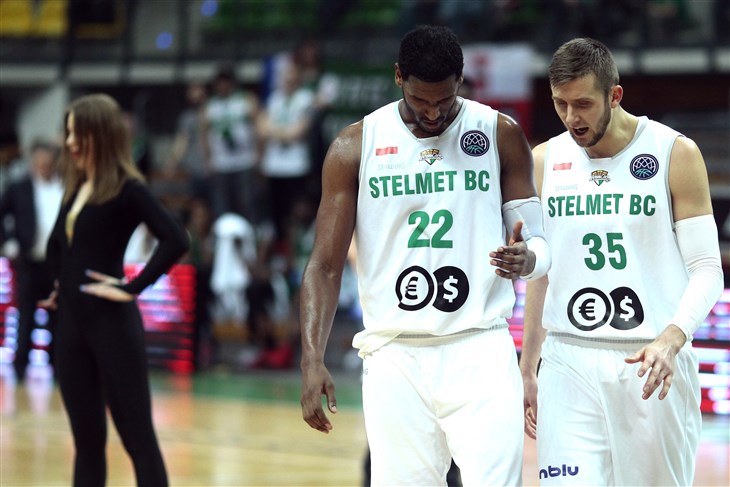 The positive off-shoots and logic of the decision don’t end there. In truth, there are so many more angles to look at something like this from. Certainly more than I covered in a 200 word section of a column piece. Recently the club put out a video interview with Kelati on the subject. The video has audio of Kelati answering questions about his season, the role change and the way he plays - with clips related to each question playing on screen. I thought they did an excellent job and offered so many more insights than I had done previously. I’d like to discuss some of those insights and what I learned from the video. But before I do that, watch the video yourself and make your own conclusions:

The first thing that struck me was the title "35 is the new 25". This was also a question asked in the interview, referencing a Zlatan Ibrahimovic quote about playing at the age of 35. Kelati speaks on how he has managed to get into such fantastic playing shape at that age and about managing his previous knee injury. In particular, he credits Jure Drakslar, the club’s Strength and Conditioning Coach and the way the club works with him on their training schedule.

"I feel really good physically. The last 2 years better than the year before. Working with Jure has been incredible for me, he’s really showed me the things that I did wrong for the last 11 to 12 years."

Hearing Kelati speak on the topic and instantly giving credit to the club's training staff, you start to get the impression of a laid back and humble professional that's enjoying this period of his career as much as any to date. Kelati continues to say:

"He’s helped me bring back some of the things I couldn’t do because of my knee or my age. I feel as good as I did 5 or 6 years ago."

Kelati then gives some credit to his relationship with the club.

"We have a good understanding here in Zielona Gora that I work really hard but I also get the necessary time off. We don’t go hard twice a day. I’m able to do one practice a day and the weight room. I think that’s part of why I’ve been playing so well."

It’s easy to overlook the importance of some of the things that Kelati speaks about here. The difference in the quality of conditioning from club to club, can literally decide careers and in positive examples such as this, double the value a club gets from their investments. It is also not a given by any stretch, that a club or coach will understand that some players aren’t suited to training twice a day. Not all clubs are as focused on the individual. It’s entirely plausible that Kelati's understanding with the club, not only helped him produce more for them on court but also made him more relaxed when it came to coming off the bench. If you were to put yourself in the shoes of the player here, having worked hard for two years to be in the right shape, the idea of coming off the bench might feel like an unwarranted demotion. When there is trust between the player and the club, it certainly builds an openness to understanding why decisions are taken.

Coming off the bench you get a chance to analyse the game in the first six to seven minutes. You see how the defense is playing, what guys are doing and where you can find your spots.

What you can hear in the way Kelati speaks about coach Urlep and the role change, is how well this has been communicated from coach and club to player:

"Immediately he (Coach Urlep) came in and told me to play my game. He calls plays for me, and wants me to be aggressive. He told me that I’m actually a little too unselfish."

It’s much easier to understand a decision when you have an explanation as to why it’s been taken and what the rationale behind it is. There is more evidence of positive leadership as Kelati goes on to say:

"He’s (Coach Urlep) really let’s me play my game. I come in with a clear mind, thinking just to be in attack-mode. You never want to be hesitant, he’s helped me find that aggressiveness and that’s why I think we have clicked."

It’s not uncommon in performance environments - especially professional sport where results decide jobs - for coaches to limit players and reduce their freedom to make decisions. The way Kelati speaks here, that’s clearly not the case and the player is evidently relishing the mental freedom. It’s also important to make it clear that freedom has to fit into a structure. If a player has freedom to execute their role but doesn’t understand the purpose of their role, that also carries the potential to be counter-productive.

Immediately he (Coach Urlep) came in and told me to play my game. He calls plays for me, and wants me to be aggressive.

Kelati’s explanation of his role as the sixth man makes it clear that isn’t the case here and also gives an interesting window into the role itself:

"Coming off the bench you get a chance to analyse the game in the first six to seven minutes. You see how the defense is playing, what guys are doing and where you can find your spots."

This a great example of Kelati applying years of film room experience to his benefit. Knowing how to watch the game from the bench is an often under-taught element of the game. Kelati then goes on to explain further how the role fits his skill set.

"Usually when I come in, teams are in foul trouble, so I know that (if I make) any aggressive move and they foul me, I go to the FT line. As a shooter, the best way to get into the game is to get those FT’s and you get that rhythm. Lots of good things come from there."

Later in the video Kelati points out that around Europe, the scouting report says he’s a shooter. From this alone, you can already gleam an understanding of the challenge he presents defenders by coming in at this point in the game. If you stand off, he shoots, if you get too close, he’s aggressive and you can’t risk fouling him as he’s a high % FT shooter. Credit should also go to the club (Thank You Kosma Zatorsky) here on the video, as the clip playing on the screen, shows you Kelati in exactly these situations. There are lessons to be learnt here for players and leaders in all sports.

As a shooter, the best way to get into the game is to get those FT’s and you get that rhythm. Lots of good things come from there.

Kelati also goes on to impart wisdom about how he likes to use different areas of the court to fit his game and how he’s adapted his game to get younger, faster and more physical players off-balance. With Monaco up next – possibly the most physical team in the Basketball Champions League – he may be required to put those adaptations to use. Certainly something to look out for, in one of the Play-Offs most fascinating, first round match ups.

For me the biggest takeaways here are for leaders. The way Kelati speaks in this interview, hints to a combination of excellent training staff and an environment fostered out of proactive decision making, effective communication, trust and freedom of expression. ZG are getting the most out of their playing and coaching staff, making the Play-Offs in a group D that had so many talented teams, is a testament to that. Usually this doesn't happen if the environment at the club isn't right. Communication and trust can’t be bought. Culture has to be built.

I come in with a clear mind, thinking just to be in attack-mode. You never want to be hesitant, he’s helped me find that aggressiveness and that’s why I think we have clicked.

When decisions are successful, they seem obvious or common sense but in many cases, they are actually far from the norm. In this case, we are offered an insight into a club trying to do things the right way. General Managers don’t often get mentioned in articles about Basketball Champions League teams but this reflects very well on Michael Szpak and the staff working behind the scenes at ZG. A club’s supporters can also be a good way to gauge how things are at a club and if you didn’t see ZG’s fans in Prague for the Gameday fourteen decider vs CEZ Nymburk, they were great value. They are equally boisterous at home. This is a fun club to watch and even more fascinating to analyse. 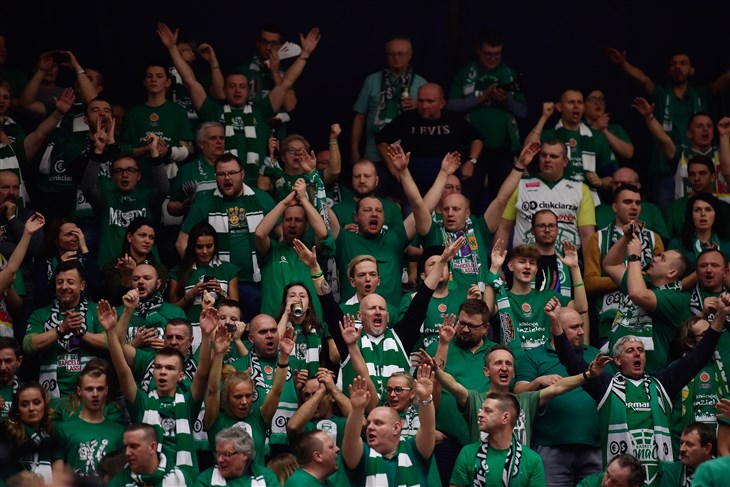 ZG are quickly joining the likes of Nanterre 92 and CEZ Nymburk as everyone’s ‘second team’ in the Basketball Champions League. It would take a mammoth effort to upset Monaco in the Play-Offs but the contest will be must-watch whatever happens. Whilst you are watching, keep an eye out for number 22 off the bench for ZG, he's a shooter.... 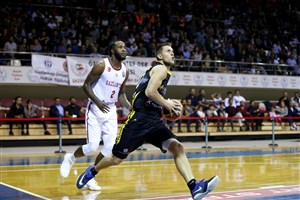 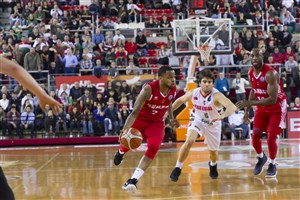