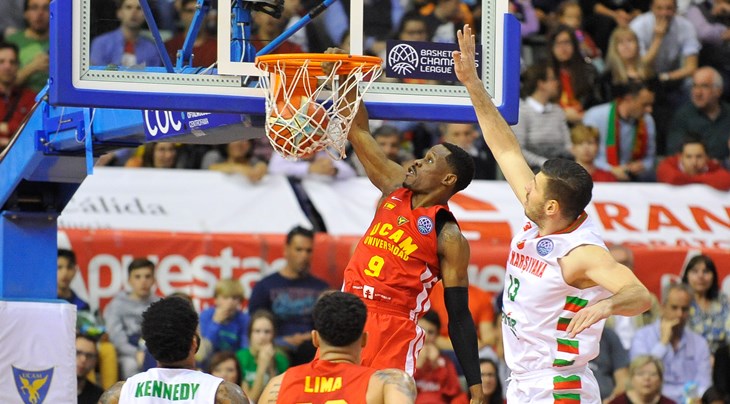 .@UCAMMurcia complete the sweep over @KSKBasket and make their fans sing: "We are going to the #FinalFour!" #BasketballCL

Having won just seven of their 14 Regular Season games, including two defeats to Karsiyaka, Murcia narrowly made the Play-Offs but now look like title contenders.

They first knocked off last year's champions Iberostar Tenerife in the Round of 16 and now have swept Karsiyaka.

The visitors, who lost the first leg by 14 at home, fell behind by 23 points on aggregate in the first half but clawed their way back and led by 7 points in the second leg late in the third quarter.

Charlon Kloof helped put paid to their hopes by hitting two 3-pointers in the final minute of the frame to trim the visitors' lead to 55-52 in the game.

The home side went in front to stay midway through the fourth quarter after Dominic Waters fouled Clevin Hannah and then coach Aleksandar Trifunovic was called for a technical.

Hannah made three straight free-throws for a 65-63 advantage. He was outstanding in the tie, finishing with 14 assists in the two legs. Murcia have excelled in the Play-Offs

Netherlands international Kloof had a memorable game. Soon after coming off the bench in the first quarter, he went hard to the basket for a dunk and then scored with two more drives. He also had 5 rebounds and 3 assists.

Brad Oleson connected on 4 of 6 attempts from behind the arc and led Murcia with 16 points while Ovie Soko had 10 of his 15 points in the first half. Hannah finished with 14 points.

DJ Kennedy, one of the outstanding performers in the league this season, had 18 points to lead all scorers and Bryon Allen had contributed 17.

Jarrod Jones had a disappointing finish to the Basketball Champions League season, scoring 9 points. He was just 2 of 10 from the floor and 5-of-6 at the free-throw line.