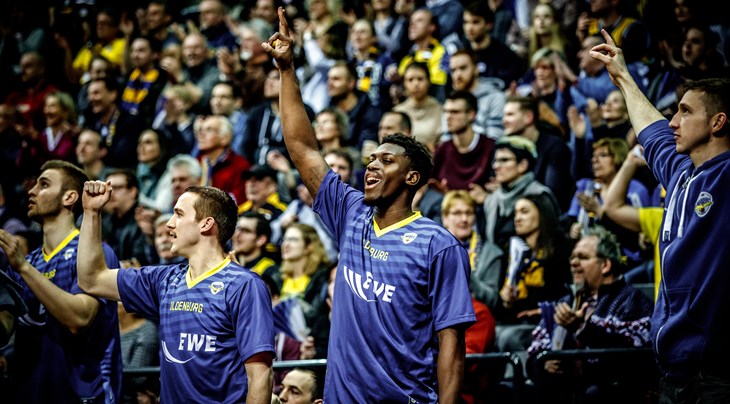 How different countries win in the Basketball Champions League

The pressure valve is still yet to be released and sixteen clubs have progressed through to the Play-Offs, all hoping to be the one diamond left holding the trophy, when the weight comes off in May. 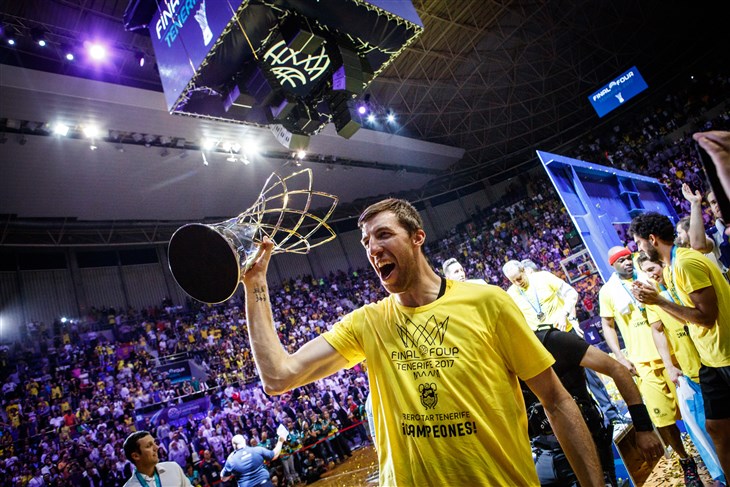 Clubs from Fourteen different countries started the Regular Season, now eight countries remain. From boardroom to bar stool, the debate around which country is the most dominant in European competition, is a common one. Recently Sportando tweeted a graphic displaying win/loss rankings by country across three European competitions.

What you can already see, is the trend of French and German clubs starting to challenge the traditional dominance (and budgets) of the Spanish, Greek, Turkish and Russian giants.

Does this trend hold when you look at the Basketball Champions League exclusively?

The Play-Offs can skew data, as not every club will play the same number of games and the jeopardy of do-or-die match ups, can cause teams to radically change their approach based on their opponent. With everyone, having played 14 games, now seems as good a time as any to dive in and find out.

The first thing to point out, is that it’s not a fair reflection of the success of a country’s clubs, if they only have one club entered. For example, if Iberostar Tenerife – last years’ champions – were the only Spanish club entered, you would expect them to record a Win% that would be much higher than the norm and make their data set a prohibitive outlier. For this reason, as general rule, we aren't discussing any record that displays "Number of Teams: 1" when you hover above that country on the map.

With that out the way, we can clearly see France with 4 clubs (Elan Chalon, Monaco, Nanterre 92 and SIG Strasbourg) leading the way with a Win% of 66.1%. Placing them above Spain with 3 clubs (UCAM Murcia, Movistar Estudiantes and Iberostar Tenerife) on 64.3%. Monaco lit the Regular Season up, losing only one game. There is little doubt that this fact is reflected in the Win% of the French clubs. As is the fact that three of the four French clubs are through to the knock outs. As with the previous graphic, we can also see the German clubs (MHP Riesen Ludwigsburg, EWE Baskets, Telekom Baskets Bonn and medi Bayreuth) outperforming what they might traditionally be expected to achieve. A Win% of 61.8, has them third as a country and above Greece and Turkey.

This of course, is just data and not to be taken as a source of conclusions. More likely a source of questions. The chief of all questions, being “Why?”

Almost weekly, a new metric is created, with the aim of becoming an all-encompassing measurement of success on a basketball court. To date, when it comes to determining why team's win games, Dean Oliver’s 'Basketball on Paper' remains undefeated. Oliver weighted Shooting (40%), Turnovers (25%), Rebounding (20%) and Free Throws (15%) as his 'Four Factors' when it comes to winning. In reality, it is more like eight factors….. the same four on offense and defense. With this in mind, let's have a look at how our clubs faired in each area and look at what questions, are thrown up from there.

Effective Field Goal% (eFG%*) was the metric that Oliver used to measure shooting, as it accounts for the added value of 3-point shooting. Given that we are seeing record breaking numbers for range shooting in the Basketball Champions League, we have also looked at 3-point shooting.

Again, what we see here, is the French clubs leading the way with an eFG% of 54.4 placing them level with the Turkish clubs. Shooting 38% from 3 on 23.5 attempts has the French above the four Turkish clubs (Banvit, Besiktas Sompo Japan, Royal Hali Gaziantep and Pinar Karsisyaka) on 36.8%. No doubt, the green lights of Nanterre 92, will have had an impact on those numbers. Both the top 2 countries for eFG% had a very similar shot profile with respect to attempts and % from 3. The other two countries that recorded the highest Win% (Spain and Germany) also recorded an identical eFG% of 52.4 but sit two % points lower.

With a Tov% of 13.5, the German clubs looked after the ball better than anyone. The context here being MHP Riesen Ludwigsburg, who recorded a Tov% of 12.5. This is the best Tov% of any club in the two year history of the Basketball Champions League. With respect to passing the ball, it should come as no surprise to see the Spanish clubs leading the way, especially when you consider the instinctive way Iberostar Tenerife share the ball. For the first time, we see the Lithuanian (Neptunas Klaipedia and Juventus) and Italian clubs (Reyer Venezia, Sidigas Avellino, Capo D’Orlando and Dinamo Sassari) on the leaderboard at 64.9 and 64.5 Ast% respectively.

Rebound % (Orb%, Drb%, Trb%*) measures the number of potential rebounds that a team can hoover up. Counting total rebounds is all well and good but rebounds are obviously dependant on shots being missed. A team that shoots badly will stand more chance, to collect more total rebounds than a good shooting team but isn’t necessarily better at rebounding.

Spanish clubs were the kings of the Plexiglas this year. Despite the best efforts of MHP Riesen Ludwigsburg – the Germans have been by far the best rebounding team in the BCL – Spanish clubs collected 52.5% of the total rebounds available to them. For Oliver’s Four Factors, offensive rebounding is the priority and again the Lithuanian clubs were strong. An Orb% of 31.3 for the Lietuviai had them in first for crashing the boards.

Getting to the Free Throw line has the double value of not only getting two high% shots, for a point each, but also the fact that it means your opponent has collected a foul, leading to potentially reduced playing time individually and an increased likelihood of conceding more Free Throws in the penalty. Free Throw Rate (FTR*) measures the number of made Free Throws against the number of FG attempted, with the aim of measuring how often teams get to the line and how good they are at shooting them.

Finally, we see the Greek clubs make a dent on the leader board. The Mediterranean’s took 21.1 FT’s a game at 72.7%, good for a FTR of 0.26. The presence of AEK and PAOK in the top 5 for FTA’s explains a lot. If either club can push their FT% above 75% in the Play-Offs, their ability to get to the line, may prove a real issue for opponents in the latter stages of close games.

Collate all the Four Factors and you end up with a rating for a team’s production on either end of the floor. Offensive Rating (ORtg*) and Defensive Rating (DRtg*) measure how many points per 100 possessions a team scores or concedes. E-Diff measures the positive or negative score differential between a team’s ORtg and DRtg.

Put it all together and we see the three countries that topped the Win% back up top. The French clubs had the lowest DRtg at 102.6 (see Monaco playing defense to understand more), the Germans had the highest ORtg at 112.3 and 2nd place in both categories for the Spanish clubs gave them the best E-Diff in this year's Basketball Champions League. Last season, Iberostar Tenerife’s ruthless efficiency made them a puzzle that nobody could solve. The same efficiency is back and being felt in full force here.

Whilst it's not advisable to draw too many conclusions from statistical data alone, one thing we can say for certain is the traditional power nations of European basketball, are being challenged. The German BBL is known for its professionalism and beautiful, packed stadiums (see medi Bayreuth). The French Pro A, for relentless physicality. What we are starting to see with the eye test and in the win column, is domestic success and development, starting to bleed into continental competitions for both countries. 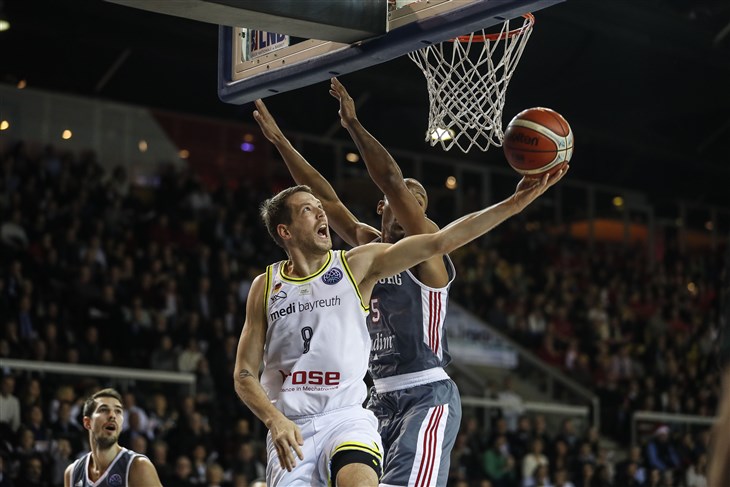 medi Bayreuth and SIG Strasbourg battle it out

If you have followed our Power Rankings this season, you will have seen Monaco firmly pinned to the top of the rankings, like the week's best dunks on our twitter feed. Despite that, even the most ambitious gambling man, would be tempted to wager on a Final with the likes of Tenerife of Spain and Besiktas from Turkey. Even if they knew deep down, that it’s just traditional narrative controlling their rationale. In reality, the gap between the big boys and the challengers has shrunk, to the point where you are unable to say with any great conviction which is which. If anything, what this data is telling us, is that we are just as likely to have a champion from Prague or Paris, as we are from Istanbul or Athens.

Sixteen different clubs, from eight different nations, all of them in with a realistic claim. This is no place for nostalgia or reputation and we wouldn’t change it for the world! 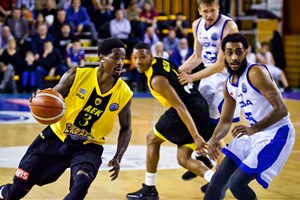 Show me the Manny! Harris is Gameday 14 MVP 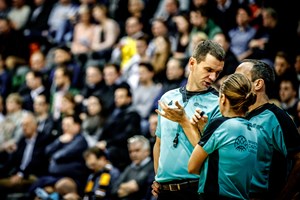