Breaking the attendance record of the Basketball Champions League with more than 11'000 spectators present at OAKA stadium, the home team maintained their discipline and tightened the screws defensively, as they came from behind to withstand a tremendous effort from Strasbourg and get one step closer to advancing.

Kevin Punter had 15 points to lead AEK, spearheading the effort at both ends of the floor, with Dusan Sakota and Manny Harris adding 12 each. Panagiotis Vasilopoulos had 9, including two crucial three pointers sandwiching the third quarter break.

"It's time that we cannot celebrate, this is just 40 minutes, the next 40 minutes is coming," AEK Head Coach Dragan Sakota said.

"We were good enough today to win, maybe not enough focus to make a bigger difference, especially when we started the third quarter with some offence attitude instead of being much more focused on our defence.

"Something happened in the last quarter; our character showed, because after being 13 up, then going minus 5 and coming back in 10 points, is especially hard to do against good teams."

For Strasbourg, Zack Wright and Louis Labeyrie led with 15 each and Levi Randolph had all 12 of his points in the first half, as the visitors need more production from some of their normal contributors in Leg 2 if they are going to recover.

"It was a difficult atmosphere and gym to play in," Wright said after the game.

"They have a very good team. We knew it was going to be a difficult game, we started very slow, then controlled it for about two and a half quarters, the fourth quarter we kind of took a slight fall and they took the lead but the main thing is we finished and kept the game under 10 points.

"You lose this game by, 15, 18, 20 points, it's difficult to win at home, so we can be disappointed but happy at the same time that we're going back home to play with the game under 9 points."

It was all AEK early, as they jumped out to a 14-2 lead, setting the tone at both ends of the floor, looking well on their way to victory.

Despite it being a good defensive effort by AEK, Strasbourg were also failing to convert easy baskets - which would only last so long - and they began to wake up towards the end of the period to bring it back to 23-15 after one.

The second period, AEK continued as they opened, stretching to their biggest lead of the game, thirteen points, 28-15, after a Vasilis Xanthopoulos steal and lay up.

As Strasbourg fought back, Mike Green went baseline for a lay up to put AEK up 41-33 just before the halftime break.

AEK began resorting to one-one-one play and Strasbourg capitalised taking a 57-55 lead into the final quarter, having piled in 24 points in the period whilst holding AEK to 14.

Vasilopoulos' two huge threes sandwiched around the quarter break restored AEK's lead as they began their own fight back.

Multiple lead changes would follow, before a 10-0 AEK run midway through the period led by Punter would see the home team regain control and grab a lead they would not give up the rest of the way to set up a dramatic Leg 2 with all to play for. 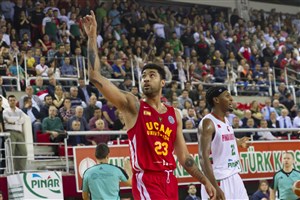