Please find below the "tough calls" of Gameday 6:

The referee calls an Unsportsmanlike Foul during a throw in in the last two minutes of the fourth period because he thinks the foul was committed while the ball was still in the hands of the player taking the throw-in. After talking to Crew Chief and Technical Delegate, he decided the ball had already left the hands of the player taking the throw in, a normal foul was called (2 free throws because black team was in team foul penalty situation).

The Trail and Centre referees call a foul in the AOS. One defensive player touches the ball after it had touched the rim. The basket must be valid according to article 31.2.5 - When an official blows the whistle while the ball is in the hands of a player in the act of shooting, or the ball is in flight on a shot for a field goal, no player shall touch the ball after it has touched the ring while it still has the possibility of entering the basket. Valid basket and one additional free throw.

After passing the ball, white player sets a screen, moving his shoulder and torso against the opponent. This is an illegal screen as the player who sets the screen must be stationary. Moreover, when setting a screen on an opponent in motion, the player setting the screen must respect the elements of time and distance. The distance required is never less than 1 and never more than 2 normal steps.

A dribble ends when the ball comes to rest in one or both hands.
Black 4 ended his dribble when the ball rested in his hand and then started a new dribble, beating his defender and gaining an unfair advantage with his carrying of the ball. 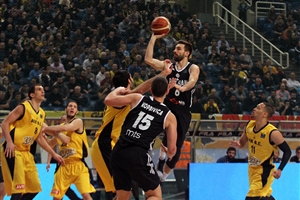 Who is the biggest revelation in the Basketball Champions League? 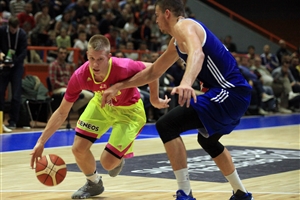