RIGA (Latvia) - When VEF Riga head coach Janis Gailitis was asked by championsleague.basketball back in October to name a player who could surprise opponents in Group E, he said he hoped it would be Kristers Zoriks, his team's new signing.

Probably even the VEF play-caller could not imagine at the time that, just after his team's first two games in the Regular Season, Zoriks would have turned heads around the BCL with his play.

I am trying to use my chances, try to use whatever the defense gives me and not force the issue, and so far I think I've been doing a decent job - Kristers Zoriks

The 22-year-old Latvian guard who returned home after his sophomore year in Saint Mary's and is merely in the first months of his professional career after the NCAA, is averaging 18.5 points and 5.5 rebounds over the first two BCL games, with an impressive average efficiency rating of 21.5.

"I think I've been so efficient so far because our coaching staff does a great job to prepare us for the games, they give us great scouting reports, they show us the weakness of every player and the overall picture of the team," Zoriks told championsleague.basketball modestly.

"I am trying to use my chances, try to use whatever the defense gives me and not force the issue, and so far I think I've been doing a decent job.

"I am one of the youngest players on the team so I try to be vocal, to be a leader, and I am learning a lot from the older guys, they are helping me a lot.

"The biggest challenge right now is to be consistent with everything I do and to get a bit better every day.

We have proved that we belong in this league, we can play with any team. Our mentality is to go out and win every time, we try to win every single game we play - Kristers Zoriks

"Another challenge is playing against more experienced players, there are a lot of smart players in this league that know how to take advantage of any little mistake you make on offense or defense, so I am just trying to soak up all the information the coaches and the scouts give me."

Zoriks, who has represented Latvia at youth level and won a silver medal and earned a place on the All-Tournament Team of the 2014 FIBA U16 European Championship, has had to make some adjustments, albeit minor, since returning home.

"Everything is pretty much the way I expected it to be, because I knew the coaching staff here, the club, and the way things work in Latvian clubs," the young guard said.

"I definitely miss the Californian weather! It's a little bit colder here in Latvia and of course I miss all the friends and teammates I had in the States.

"It feels great to come back home and start my pro career. I went to college to use it as a step between kids' basketball and pro basketball and I think it helped me a lot, I learned a lot of things and I have matured.

The league is growing and getting better every year, I followed it a little bit while I was in college and I don't think there is any bad team in this league right now, there are a lot of high-level players - Kristers Zoriks

"Also playing with the youth national teams helped me understand European basketball better. I think that college basketball, especially in Division I, is very physical too, so I think it prepared me well for European pro basketball.

"I still got to learn a lot of things and work in the weight room so I can keep up with some bigger, stronger guys."

VEF started off their Group E campaign narrow loss at home in the season opener against SIG Strasbourg and a road win at Peristeri, where Zoriks had 20 points and 7 boards.

📺 @VEFRiga snapped a seven-game losing streak on the road to celebrate their first ever win away from Latvia in the #BasketballCL!

Riga's next game is not until December 8th, when they face neighbors Rytas Vilnius in an eagerly anticipated Baltic derby, which might prove pivotal as all four teams are currently tied at 1-1 in the standings.

"We have a lot of time until our next game against Rytas, but I don't think there will be any problems with staying focused, because it's a Baltic derby," Zoriks said.

"We just need to take it one practice at a time, prepare for them, watch a lot of film and try to find their weakness. I know Coach is going to come up with a great game plan and we're just going to try to follow it.

"I think we have proved that we belong in this league, we can play with any team.

"The group is probably going to go down to the wire, but we can't worry about other teams, we just got to worry about ourselves, get ready for each game and stay focused.

"Our mentality is to go out and win every time, we try to win every single game we play."

With this mentality, it's evident that Zoriks doesn't see any ceiling for VEF's campaign this season. He doesn't want to set a goal either, but he knows he has been enjoying every minute of his first BCL experience.

"Everything is how I expected it to be, I knew that everything was going to be organized well and everything would be on a high level," he said.

"I think the league is growing and getting better every year, I followed it a little bit while I was in college and I don't think there is any bad team in this league right now, there are a lot of high-level players.

"I would prefer the BCL to keep the previous format, with four groups of eight teams each, but it is what it is, we're living in weird times right now.

"I can't complain, I am just thankful that I have this opportunity to play in the BCL and I am trying to enjoy every minute. 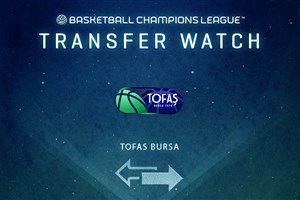