MIES (Switzerland) - There are times when coaches adopt a cagey approach to avoid divulging what they really think of their opponents, but Group B of the 2020-21 Regular Season is definitely not one of those cases.

The four teams that were drawn together in this group, ERA Nymburk, JDA Dijon, Keravnos and Tofas Bursa (in alphabetical order) are genuinely only now discovering each other.

Tofas is a newcomer to the BCL, Keravnos are the first Cypriot team ever to qualify to the competition, and even BCL regulars Nymburk and Dijon coincided at the Athens Final 8 but didn't play against each other and have only crossed paths as far back in 2018, in a very different world.

We asked each coach 10 questions to help us preview Group B action, which tips off Wednesday October 20th (Nymburk coach Oren Amiel was unable to answer prior to publication).

Laurent Legname (JDA Dijon): I think it's Nymburk, because they have been playing in the BCL for several years and they have manage to keep their strong group of domestic players, even though they lost Jaromir Bohacik this summer. This year they also have good foreign players and they also have the best coach, in Oren Amiel.
Christophoros Livadiotis (Keravnos): I saw Dijon play at the Final 8 in Athens and I liked their game a lot. They have clear roles and very good chemistry. It's very important that their roster didn't change a lot from last season.
Orhun Ene (Tofas Bursa): Dijon looks to me like they are more ready and are stronger than the other teams, not because they have the best roster but because they played at the BCL Final at the start of the season and that gives them more confidence, they are ahead of the rest of us at the beginning of the competition.

How it started : How it ended : pic.twitter.com/AtmNYDK1YU

Laurent Legname: I think maybe Nymburk against Tofas, because they are two great teams. Nymburk for the reasons I explained before and Tofas because they have been playing really well both in Turkey and in Europe, I think they will be two fun games.
Christophoros Livadiotis: I expect all games in this group to be very interesting, there are high-quality teams. With the only exception of my team, the other three teams have experience. Don't forget that Dijon and Nymburk participated in the BCL Final 8 just a few days ago.
Orhun Ene: I can recommend all games because I think all teams are pretty close, we don't have big differences so fans will enjoy it. The change of format [to groups of four teams] because of the current situation means that every game became even more important because there are now very few games in the group.

Which of the games in this group will be the toughest for your team and why?

Laurent Legname: It's probably the game against Keravnos in Cyprus because first it's a long trip and then maybe you don't know what to expect, for them it's the first time, for them every BCL game is a big occasion and they will play with heart, they will play at 200 percent.
Christophoros Livadiotis: All games are going to be very difficult for my team. If I had to choose one, I would say the game against Dijon in France, because it's going to be the first game in the BCL group stages for us as a team.
Orhun Ene: It doesn't matter who is the opponent, every game will be tough because all teams want to win their home games but if you want to advance from the group you need to win on the road. So it's very important to protect our homecourt. Players can easily concentrate for home games, you don't need to do anything extra at home, but you need more both mentally and physically to win on the road.

Laurent Legname: Vojtech Hruban of Nymburk because he is a great player. He is tough to defend, he is quick, he is a great shooter, he is a top-level player and two years ago he posed lots of problems to my team.
Christophoros Livadiotis: The two ball-handlers of Dijon, David Holston and Axel Julien. They play very well together, both can score and also create for others. I faced Holston [with my previous teams] when he was playing for Artland Dragons and also when he was at Pinar Karsiyaka. He was amazing! Also Sean Kilpatrick of Tofas is a very high level player. I watched him play with Panathinaikos in the EuroLeague and I believe he is a player for that level.
Orhun Ene: I respect all players equally, so I don't want to give any specific names. When I prepare my team for a game I always tell them that we have to take each opponent player seriously, defend every player, so I don't find it correct to focus only on certain players, you need to focus on a team as a whole.

Name one or more players in this group which you expect to be a positive surprise (can be a player on your team).

Laurent Legname: It's tough to answer right now, but maybe Luka Rupnik, whom we played against when he was on Fuenlabrada and I thought he can be a very good player (on Friday, the day after this interview, Rupnik parted ways with Nymburk and signed with Group D team Casademont Zaragoza).
Christophoros Livadiotis: No answer.
Orhun Ene: No answer

Laurent Legname: I wouldn't be able to give an honest answer because I only know how Nymburk play, and I haven't yet seen Tofas and Keravnos.
Christophoros Livadiotis: I don't have a clear picture from all other teams yet, but as I said I like Dijon's game and the way they performed in the Final 8. I like their well-defined roles, their eight-player rotation and that they are an athletic team that plays with very high intensity.
Orhun Ene: Tofas has been taking part in European competitions for the past five years and we are an experienced club. What I have seen in these past years is that most teams play a European style of basketball, meaning that I cannot say that teams play according to their specific national league style. For example, Nymburk has been playing on this level in Europe for many years, so I can't tell that one team has such a different style of play from another. During a game, it's usually mistakes that decide the result, they are more important than the style of basketball.

Laurent Legname: As far as best defense is concerned, I can tell you I wish it's going to be Dijon (he laughs) We need to play good defense in every game. As for offense, Nymburk score a lot of points every time we play, they are very quick and I know Tofas can also score.
Christophoros Livadiotis: Best offense I would say Tofas, and best defense Dijon.
Orhun Ene: I can't say anything before the competition starts, right now I know that Nymburk and Dijon play tough, physical defense, they play good team defense and they are both good in running in transition after a defensive stop. But you can't predict right now, because each team plays in a different league, against different level and kind of opposition.

Laurent Legname: It's hard to answer at this moment, we try to run, Nymburk like to run but I can't really say right now.
Christophoros Livadiotis: Fastest pace I will say Dijon. They are very athletic and also the style of basketball in the French league is always like that ([fast-paced]. I think my team plays with the slowest pace for the same reason, because our domestic league goes generally to a slow pace and there is not such high intensity of play.
Orhun Ene: No answer

Laurent Legname: I have never been to Prague but I have heard from so many people that it's a very beautiful city, so I would like to visit Prague. Of course I don't know any restaurants there, but I am sure we could find some nice ones (he laughs).
Christophoros Livadiotis: No answer
Orhun Ene: We don't have time to visit the city or go to a restaurant, we are basketball people and during the season we are just looking to do our job, travel there and win the game. 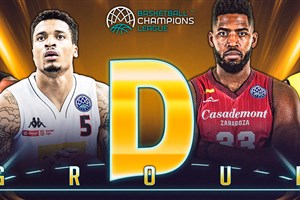