MIES (Switzerland) - David Holston and Axel Julien inspired JDA Dijon to overcome opening night jitters and an immensely tenacious Keravnos as the French side climbed back from an 18-point deficit and prevailed in overtime at home over the Cypriot newcomers in a memorable premiere to the 2020-21 Basketball Champions League Regular Season .

In the other game of the night, which lifted the curtain on Group A action, Tenerife overcame a slow start to cruise past Bakken Bears at home.

David Holston and Axel Julien engineered a memorable Dijon comeback and a 91-78 victory in overtime over tenacious BCL newcomers Keravnos, who led by as many as 18 points.

With the scores tied at 6-6 following the opening exchanges, Brandon Rozzell scored with a layup and sparked a 15-0 run which Nikos Stylianou capped off with a jumper 1:50 from the first buzzer to lift the Cypriot team to a 21-6 lead.

Keravnos, who dominated the boards up until the fourth quarter and held Dijon to just 20 percent shooting from three-point range until late in the third, were still holding a 15-point lead, 57-42, shortly before the third buzzer.

Holston however decided it was time to show the BCL newcomers one of his trademark performances replete with late heroics and poured in 15 points in the fourth quarter to power Dijon back into the contest and give them a 67-64 lead with a triple 4:10 from the end of regulation.

With the scores tied at 72-72, Andre Williamson came up with a steal but Keravnos didn't manage to fire off a shot before the shot clock run down. Holston had the chance to win it at the buzzer for the hosts, but his long three rimmed out and the game went into overtime.

Chase Simon drilled a triple 3:23 from the end of overtime to bring Dijon ahead 75-73, Julien converted an and-one play and, after Dijon got another stop on defense, Jacques Alingue gave them an 80-73 lead with a dunk 2:21 from the end and the hosts finally breathed a sigh of relief.

Julien finished with 26 points, 5 rebounds and 2 assists while Holston had 24 points and 4 assists to instigate Dijon's comeback. For Keravnos, Ahmaad Rorie had an amazing BCL debut with 23 points and 7 boards while Brandon Rozzell added 22 points and 3 steals.

Bakken led Tenerife by as many as seven points early on but the Spanish side jumped ahead in the second quarter and a BCL career-best display by Giorgi Shermadini  propelled them to an ultimately comfy 98-73 victory in the Group A opener.

The Danish side looked very sharp from behind the three-point arc upon their return to the competition following a three-year wait and a Q. J. Peterson triple just before the two-minute mark in the first frame gave them their biggest lead, 22-15.

Emir Sulejmanovic however provided Tenerife with a much-needed spark off the bench and the hosts balanced proceedings by the start of the second stanza.

Newly-arrived Spencer Butterfield drilled a triple 6:37 from the halftime buzzer to cap off an 11-0 Tenerife run and the yellow blacks to take a 34-27 lead.

The Bears reacted momentarily but a Tyler Cavanaugh trey just before the interval stretched the gap to 48-35 and the Danish team didn't manage to get back into contention after the break.

Shermadini, who made his first nine shots from the floor without a miss, finished with 26 points and added 8 rebounds and 3 assists for a BCL career-high efficiency rating of 34. Cavanaugh had 14 points and 3 boards and Sulejmanovic chipped in with 10 points for the hosts.

For the Bears, Peterson finished with 24 points, 3 rebounds and 2 assists and Michel Diouf added 13 points. 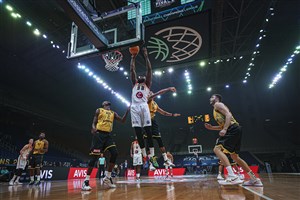 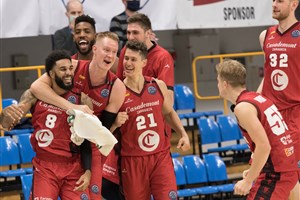