The Hungarian team came up with their first ever victory over the Spanish team, who missed their first chance to book a ticket to the Play-Offs.

Meanwhile in Group E SIG Strasbourg survived a Peristeri comeback to secure an important road win and Hereda San Pablo Burgos were also victorious on the road in Group H, while over in Group G Igokea prevailed over Hapoel Jerusalem in the first of two games between the two team in the space of 48 hours.

Zaragoza, who would have secured a ticket to the Play-Offs with a win, led briefly by as many as 11 points, 35-24, in the second quarter.

But, in a game that featured 13 lead changes, the group leaders always felt Falco breathing down their necks as the Hungarian side controlled the battle on the glass 34 to 27 and held Zaragoza to just 8 of 30 shooting (26.7 percent) from beyond the arc.

Szilard Benke drilled a triple 3:50 form the final buzzer to tie the scores at 84-84 and, after Zaragoza missed yet another three-point shot on the other end, Evan Bruinsma knocked down a step-back trey over Robin Benzing's raised hand to give Falco an 87-84 lead.

Benke hit another triple, this time from the corner, and Kyan Anderson essentially sealed Falco's win by scoring his 25th point of the night, also from beyond the arc, to make it 93-86 for the hosts with 1:28 left to play.

Anderson dished out 9 assists to go with his game-high 25 points and registered an efficiency rating of 34, while Zoltan Perl chipped in with 17 points and Benke with Bruinsma finished with 15 points apiece. Jason Thompson had 23 points and 8 rebounds for Zaragoza in a losing effort.

Falco have now improved to 2-2 while Zaragoza drop to 3-1 but remain in first place in the group standings.

Igokea squandered a 13-point lead but made crucial plays down the stretch to hold off Hapoel Bank Yahav Jerusalem 75-73 and pick up their second win in their first three games in the competition.

The hosts run in the open floor on repeated occasions early on and opened up a 27-14 lead after Darko Talic hit a jumper shortly before the eight-minute mark in the second frame.

Jerusalem struggled with their shooting from beyond the arc but were fortunate to have Suleiman Braimoh on a great night and the Nigerian power forward poured in 20 points in the first half alone to help his team balance proceedings by the interval.

Marko Josilo scored with a layup with 1:55 remaining on the clock to give Igokea some breathing space, 71-65, but J’Covan Brown drew an unsportsmanlike foul and Hapoel made the most of it to reduce the gap to two points, 71-69.

The Israeli side however missed the chance to tie the scores on the next possession and Antabia Waller sunk a beautiful off-balance jumper 36 seconds from time tom make it 73-69 for Igokea, who held on for the win in the dying seconds.

Josilo led Igokea with a double-double of 17 points and 11 rebounds and Edin Atic chipped in with 15 points, 6 boards and 2 blocks, while Braimoh finished on a game-high 29 points and 9 rebounds in defeat.

The two teams will meet again in 48 hours, also in Laktasi, for their second game in Group G in which Jerusalem will be the nominal hosts.

Reigning BCL champions Hereda San Pablo Burgos displayed on Tuesday their trademark resilience by overcoming a slow start and then holding on for a 74-71 win over Darüssafaka on the road.

Burgos have now improved to 3-1 and, having defeated Darüssafaka both home and away, they hold the tiebreaker in Group H over the Turkish team, who slide to 1-3.

Darüssafaka started off on a 10-0 run and led by as many as 12 points, 15-3, midway through the opening quarter, but the entrance of the second unit of Burgos stopped the rot, as Ken Horton and Alex Renfroe hit one triple each in quick succession.

The Spanish team held their hosts to just 14 second-quarter points and led by as many as 6 points, but the two teams traded blows after the interval and it became evident the game would go down to the wire.

With Darüssafaka leading 71-70 and 1:14 remaining to the final buzzer, Thad McFadden drilled an acrobatic shot from eight meters out just as the possession clock was running out, and the Turkish team turned the ball over.

Vítor Benite drew a foul but converted only one of his free-throws, making it 74-71 for Burgos, and Darüssafaka called timeout.

When action resumed they put the ball in the hands of Andrew Andrews but Omar Cook came up a great defensive play and prevented the hosts' point guard from even firing off a shot.

The winners have now improved to 3-1 in the Group E standings and are sole leaders pending tomorrow's game between VEF Riga and Lietuvos Rytas, while the Greek side dropped to 1-3.

a few seconds in the first half and finished the second frame on a 13-4 run to take a double-digit lead, 43-33 at the interval.

The visitors appeared to be running away with the game early on in the third stanza, when Jaromir Bohacik knocked down a triple to stretch their lead to 55-35, but Peristeri decided the 17 remaining minutes were sufficient time to turn the tables.

A Jaye Crockett triple 6:42 from the third buzzer sparked the Athens team's reaction and Steven Gray drilled two three-pointers in quick succession, the second with 43 seconds remaining to play, to tie the scores at 76-76.

But Jefferson managed to find a sliver of open space just 12 seconds from the final buzzer to knock down the trey that proved to be the game the game-winner, as Ryan Harrow missed on a desperation attempt to force overtime on the other end.

Colson paced Strasbourg with his 20 points, 6 rebounds and 4 assists while Ishmail Wainright had 18 points and 7 boards. Gray finished with a team-high 18 points and Marvin Jones collected a double-double of 13 points and 12 rebounds in defeat.

D'Angelo Harrison poured in a BCL career-high 35 points and Happy Casa Brindisi pulled away from Filou Oostende in the final frame to clinch a 93-81 win at home and join Hereda San Pablo Burgos at the top of the Group H standings.

The Italian team and the reigning BCL champions are tied for first place at 3-1 while the Belgian side drop to 1-3 after this loss, the same record as Darüssafaka Tekfen.

Brindisi led almost uninterruptedly from the start, but Oostende kept breathing down their hosts' necks until the end of the third quarter and the Italian team entered the final stanza leading by just six points, 66-60.

Alessandro Zanelli however drilled a three-pointer shortly with the start of the fourth period to spark a 12-2 Brindisi run and the gap ballooned to 16 points, 78-62, on an Ousman Krubally dunk right at the eight-minute mark.

Brindisi led by as many 19 points, albeit Oostende's second unit managed to reduce the deficit somewhat in the final couple of minutes.

Harrison collected his 35 points on 6 of 12 three-point shooting and extended his perfect free-throw record in the BCL as he went 9 of 9 from the stripe, also adding 7 rebounds and 3 assists.

Nick Perkins chipped in with 14 points and 7 rebounds, while Olivier Troisfontaines had a team-high 23 points for Oostende. 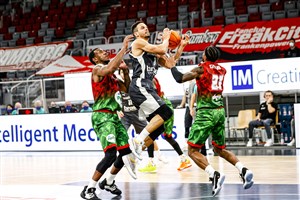 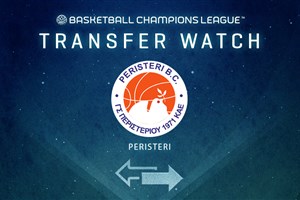 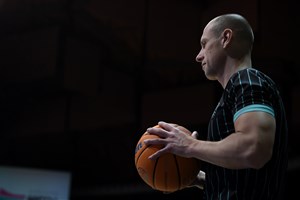