MIES (Switzerland) - There is nothing quite like the smell of new, they say, and with the new Basketball Champions League season about to tip off, this is the ideal time to take a look at the fresh faces about to step out in the competition for the first time.

With so many players set to make their BCL debut in 2020-21, it's almost certain that several new arrivals will be eager to prove this list wrong through the course of the season, but for the time being let's have a closer look at 10 players (in alphabetical order) whom we expect to turn heads in 2020-21.

Balvin is probably among the best-positioned players on this list to have a breakout season, because he is entering his second season at Bilbao and he knows very well his role and what his coach, Alex Mumbru, asks from him.

What's more, the 28-year-old Czech international is at the perfect age to take another leap, not dissimilar to the one he took with the national team at the FIBA Basketball World Cup in 2019.

The big man is averaging 10.6 points and 7.4 rebounds through the first five Liga Endesa games of the season.

Turk Telekom convincing Tyler Ennis to join them was a great coup in the transfer market, and the only reason it didn't get more of the spotlight was that they had an influx of new signings, not least that of Sam Dekker.

Ennis played two games with Fenerbahce in 2018-19 but this will be his first full season in Europe and once he gets fully accustomed to the style of play, he could potentially show us some amazing three-point shooting.

In his best season in the NBA, in 2016-17 with the Los Angeles Lakers, the now 26-year-old averaged 7.7 points per game on 39 percent shooting from beyond the arc.

Sean Kilpatrick has been on several different teams throughout his professional career -- in fact the New Jersey Nets is the only team with which he's spent more than one year -- but one thing that was always apparent, no matter where he played, is that he is the type of player who will always figure out a way to put the ball through the hoop.

The 30-year-old shooting guard first landed in Europe in 2018 on behalf of Greek powerhouse Panathinaikos, and spent great part of last season with Buducnost. At Tofas though, he could very well have for the first time the role that suits him best.

Through the first three games of the new Turkish BSL League season, Kilpatrick is averaging 17.7 points per game on an outlandish 40 percent three-point shooting.

Oh we got a problem!? Yeah that’s what I thought. https://t.co/HMfw3eDtWv

There is no question that, if there is ever a CJ McCollum lookalike competition in the BCL, Hamilton would win it hands down, but that is not the kind of impact Galatasaray expect the 27-year-old guard to have in his first season with the Turkish powerhouse.

Hamilton will need some period of adjustment because his previous teams in Europe -- Maccabi Rishon Lezion and Juventus Utena -- were quite different to the Istanbul club.

Once he adapts however, we could be in for a real treat, as his late season heroics with Rishon showed last summer.

Happ was born in an Illinois town called Milan, so one might say he was always destined to end up in Italy, but the truth is that his quintessential European-big style has much more to do with that, than any trick of destiny.

The 24-year-old American had a breakout season at Vanoli Cremona in 2019-20 averaging 18.3 points per game and 9.3 rebounds per game, so when coach Meo Sacchetti left Cremona to take the reins of Fortitudo, he asked Happ to come along and join him at the storied Bologna club.
Happ is averaging a double-double of 11.7 points and  10.3 boards through the first three Serie A games this year.

The 22-year-old Harding is the youngest player on this list and he is coming straight out of college, so it is almost certain that it will take him a while to get used to style of play on this side of the Atlantic, the routine of a professional player, or even everyday aspects of life.

But the talent is there, he is a gifted player with the potential to raise his ceiling to the top level as long as he polishes some aspects of his game and learns the ropes of European ball.

He is after all the all-time leading scorer in Weber State history, where a certain Damian Lillard also graduated from. If Nymburk go far this season, we might get to see Harding's best in the Play-Offs.

We've mentioned above Alex Hamilton's role in Rishon reaching the Israeli league Finals in the summer, and of course the other player who fueled that deep run was Harrison, who averaged 17 points, 6.1 rebounds and 4.3 assists per game.

The 27-year-old Harrison landed in Brindisi and, admirably, picked up where he left off, as if nobody told him he had moved from Israel to Italy.

He is averaging 16.3 points and 4 assists through the first three games of the new Serie A season and, if his career so far is an indication, he plans to be the embodiment of consistency throughout the year. He is a great new arrival to Brindisi, the Italian league and the BCL.

"Welcome to Europe, Demetrius. Here are the keys to one of the most storied clubs of the continent, which has a legion of loyal fans, and you're gonna play next to Andrew Goudelock - best of luck!".

Obviously the Rytas pitch to Jackson was more complicated than that, but it was just as easy to grasp and effective as that, because the 26-year-old American has arrived in the Lithuanian capital and gone to work immediately.

Jackson, who spent the last seasons between the NBA and the G League, has acclimatized to his new surroundings with blazingly fast speed and is already averaging 13.5 points and 6 assists per game, on 38.5 three-point shooting.

It's always easy to say that a player was a perfect match for a team in hindsight. Pusica signing for Sassari though is that rare case when almost everybody predicts it right from the start to prove a match made in heaven.

Or at least this is what most people expect from the match of the 25-year-old Serbian point guard who is ready for a breakout season with head coach Gianmarco Pozzecco.

Pusica is averaging 15 points, 3 rebounds and 2 assists through the first three games of the new Serie A season, and he looks like he is just warming up.

There is only one player over the age of 30 on this list of BCL rookies and it's not by accident that it's Alex Renfroe, a point guard who has always relied on his court vision and reading of the game rather than physical attributes that might fade with time.

As it became apparent at the Final 8 in Athens, Burgos will not depend on any one star player, but rather play as a team that makes the most of its deep rotation and wealth of options.

Renfroe is the orchestra conductor the 2020 BCL champions have entrusted with running the show, and if their recent coronation is any indication, it will prove a highly successful choice. 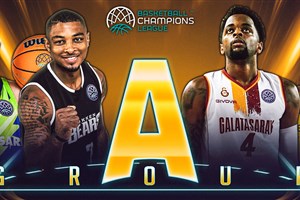