MIES (Switzerland) - Tuesday action featured blockbuster thriller material as Casedemont Zaragoza and Happy Casa Brindisi emerged victorious at the end of regulation when all seemed lost and ERA Nymburk won on a buzzer beater in overtime.

If you are not a big fan of a thrilling finale but you appreciate high-scoring basketball, there was also quite a lot in store for you, as San Pablo Burgos and Filou Oostende both delivered outstanding offensive displays and exceeded the century mark.

Let’s have a closer look at all nine Tuesday encounters:

Two D.J. Seeley free-throws with three-tenths of a second on the clock allowed Zaragoza to edge out Besiktas 74-73 on the road, despite squandering a 16-point first half lead.

Besiktas clawed their way back after the break and pushed ahead 58-56 with 7:17 remaining in the fourth stanza but Jonathan Barreiro and Seeley replied with back-to-back triples to put Zaragoza back in the driver’s seat and the Spanish team held on to a 72-71 lead until there were 11 seconds left to play, when Seeley fouled Jordan Theodore.

The Besiktas point guard missed both free-throws but James McAdoo came up with what appeared to be the play of the game at the time, as he tipped the ball in to push the hosts ahead 73-72 with 10 seconds left.

Zaragoza called a time-out but once play resumed they appeared to be fluffing their lines on the play that coach Fisac had drawn, only for Seeley to attempt a desperation three from the top of the key with just 0.3 second on the clock.

In his attempt to block the shot, Birkan Batuk fouled the Zaragoza star and gifted him three free throws, of which Seeley converted the first two to win it for the Spanish team.

Seeley finished with 16 points, 5 assists and 3 rebounds while Nemanja Radovic and Nicolas Brussino had 14 points and 13 points, respectively, and came up with 7 boards each. For Besiktas, McAdoo and Shaquielle McKissic finished with 18 points apiece.

A 56-point offensive output in the second half and a 28-point performance on 8 of 11 three-point shooting by Keith Hornsby propelled Torun to a 97-81 victory over French powerhouse Strasbourg.

The hosts took the lead in the third quarter and Aaron Cel drilled a triple with 8:28 remaining in the final stanza to cap off a 9-0 run and extend Torun’s cushion to 14 points, 76-63.

Strasbourg stopped the rot but before the thought of a final push even crossed their minds Torun went on another run and Keith Hornsby gave the Polish side their biggest lead of the night, 89-68, with a three-pointer 5:12 from the final buzzer.

Torun scored 44 of their points in the paint but were also lethal from long range, hitting 14 of their 25 attempts from behind the arc.

Hornsby added 4 rebounds to his 28 points while Cel finished with 19 points and 8 boards and Damian Kulig had 14 points, 7 rebounds and 5 assists. For Strasbourg, Gabe York had a near double-double of 17 points and 9 rebounds in a losing effort.

Oostende led Holon for almost the entire game as they scored a century to clinch an 101-86 win over UNET Holon and bring to an end a three-year unfavorable tradition of losing their opening home game in the BCL.

The hosts built an 80-65 lead by the end of the third period and held on despite a sustained charge at the start of the fourth by Holon, who reduced the gap to 88-84 with just over 4 minutes left on the clock.

The Belgian side won the battle on the glass and close to the rim as they out-rebounded Holon 41 to 24 and hit 62 percent of their shots from inside the arc, compared to the Israeli team’s 39 percent two-point shooting.

Shevon Thompson led the way for Oostende with 22 points while Jean-Marc Mwema added 14 points. Marcus Foster had 13 points for Holon in a losing effort.

Newcomers Vechta poured in 35 points in the last 14 minutes to pull away from Pau-Lacq-Orthez and claim a 90-75 victory in France, their first BCL win on the road and their second in as many games in their maiden European competition.

The scores were tied at 55-all with about four minutes left in the third frame when Vechta switched gears. When it was all said and done, they had gained a 85-68 lead and sentenced the game.

The German team forced their hosts to commit 19 turnovers and capitaliszed in the best possible way as they scored 22 crucial points off them. By comparison, Pau-Lacq-Orthez scored only 8 points off Vechta turnovers.

Trevis Simpson paced the winners with 19 points and 4 rebounds while Josh Young had 14 points, 6 assists and 5 rebounds. Travis Leslie finished with a game-high 22 points in a losing effort.

The Spanish debutants jumped in the lead shortly after the opening exchanges and raced to an 110-78 triumph over Anwil to celebrate their second win in as many games and claim bragging rights on the highest winning margin so far this season.

Burgos, who led by as may as 37 points in the fourth quarter, dished out a collective 30 assists and shot an eye-popping 68.6 percent from two-point range (24 of 35).

The Spanish team’s coach, Joan Peñarroya, gave playing time to all 12 players on its roster, and saw his bench players coming up with a 56-point contribution.

Thaddus McFadden hit 5 of his 6 shots from behind the arc to lead 5 Burgos scorers in double digits with his 20 points. Meanwhile Brazilian big man Jasiel Rivero, who only plays in the BCL because of the Spanish Liga Endesa regulations, registered a double-double of 12 points and 16 rebounds. Tony Wroten of Anwil finished with a game-high 24 points in a losing effort.

A Zach Hankins tip-in at the death gifted Nymburk a 74-72 win over Gaziantep in overtime, following a 45-minute rollercoaster ride in what was easily the most unpredictable game of the season so far.

Nymburk abolished a 20-point lead as Gaziantep unleashed an amazing fightback in the second half to tie the scores at 65-all at the end of regulation and send the game into the extra period.

The game appeared destined to head into second overtime but with the scores tied at 72-all and just 5 seconds remaining, Ivan Almeida received the inbound pass and drove to the Gaziantep basket.

His left-handed lay-up in traffic rimmed out, but Zach Hankins appeared out of nowhere to tip the ball in and win if for the hosts just as the buzzer was sounding off.

Veteran Petr Benda paced Nymburk with 16 points while game hero Hankins finished with 14 and Gaziantep’s Drew Crawford finished with a game-high 20 points in a losing effort.

Tenerife were made to work hard by Mornar Bar but emerged victorious 81-74 in Montenegro to get off to a perfect two-for-two start in Group C and extend their BCL regular season winning percentage on the road to a competition-best 20 victories in 22 contests.

Mornar held a 60-55 lead with three minutes remaining in the third frame but the Spanish side went on a 22-8 burst bridging the final two quarters which Giorgi Shermadini capped off with a lay-up to put the visitors ahead 77-68 with less than two minutes left to the final buzzer.

Shermadini led the winners with 19 points while Gabriel Lundberg and Santi Yusta made very important contributions with 12 points each. For Mornar, Jacob Pullen finished with 18 points in a losing effort.

Falco used a big fourth quarter and a huge display by Zoltan Perl to celebrate their maiden win in the BCL, 76-66 over PAOK, becoming in the process the first Hungarian team to beat a Greek side in the competition.

The hosts held PAOK to just 10 points in the final frame and, led by the inspirational play of Perl who reached an efficiency rating of 29, scored 23 points of their own down the stretch to pull away and secure the win.

Falco’s ability to score in transition and PAOK’s wasteful free-throw shooting proved crucial in a clash where both teams struggled offensively during long stretches. The Hungarian side got 19 points on the fast break while the Greek team attempted as many as 18 shots from the foul line but only converted 8 of them.

Perl finished with 23 points on 10 of 16 shooting from the floor, brought down 9 rebounds and dished out 5 assists, while Szilard Benke added 13 points and 3 assists. PAOK’s Adam Smith collected 13 points and 4 assists in a losing effort.

A Tyler Stone put-back at the final buzzer did justice to a massive performance by Adrian Banks and lifted Brindisi to a 76-75 victory over Bonn in a tight encounter that featured 18 lead changes.

With 3.3 seconds left on the clock Martin Breunig hit the go-ahead layup for Bonn and Brindisi called a time-out. The Italians inbounded the ball to Kelvin Martin but his almost impossible baseline floater bounced on the rim before Stone emerged with the winning tip-in.

Brindisi’s ability to score in transition kept them in the game when they were struggling to score in half-court play, as the hosts had 17 points on the fast break to Bonn’s 3 points in the open floor.

Banks scored 31 points on 6 of 8 from behind the three-point arc and added 9 rebounds and 3 assists while game hero Stone finished with 13 points and 7 boards. Breunig led all Bonn scorers with 15 points and also had 8 rebounds. 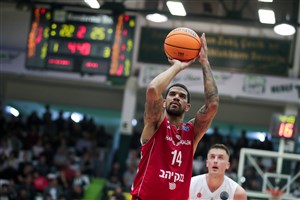 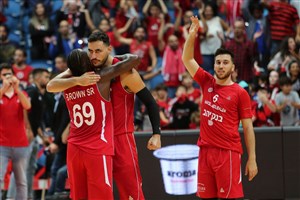