MIES (Switzerland) - Turk Telekom, Hapoel Bank Yahav Jerusalem ERA Nymburk and JDA Dijon all claimed on Wednesday a third victory in as many games in the 2019-20 Basketball Champions League, joining Iberostar Tenerife as the only teams to have made a perfect start to the season.

Let's have a closer look at all eight Wednesday games.:

Hapoel rode the hot hand of James Feldeine and used a big third quarter to pull away from Vechta and claim a 98-87 victory, their third in as many games and the first defeat for the German side in this BCL season.

The hosts poured in 35 first-quarter points, on 7 of 9 shooting from behind the arc, but did not manage to shake off Vechta and only led 54-47 at the break.

Vechta reduced the gap to four points, 56-52, early in the third frame but back-to-back triples by Feldeine and J’Covan Brown sparked la 27-7 burst which Tamir Blatt capped off with another trey 20 seconds from the end of the period, for Hapoel's lead to balloon to 83-59.

Feldeine finished with 25 points on 6 of 9 three-point shooting, Brown collected19 points while Blatt narrowly missed out on a double-double as he had 12 points and 9 assists. Trevis Simpson meanwhile finished with a game-high 26 points on 7 of 12 from behind the arc in a losing effort.

Hapoel now enjoy the view from the top of the Group B standings in solitude, while Vechta have slipped to 2-1.

AEK held Antwerp to just 3 points in the third quarter to take control of proceedings once and for all following 16 lead changes, and prevailed 62-51 over the Belgian side in Athens.

A dunk by Linos Chrysikopoulos just a minute into the third frame put the hosts ahead 37-36 and with both teams making slow progress through the period, Howard Sant-Roos intercepted a pass and stretched the lead to 47-38 with 2:19 left to play until he final stanza.

That slim advantage proved as valuable as gold in such a low-scoring game and AEK held on to the lead without any more drama until the end, as Antwerp were left lamenting their 17 turnovers, off which the Greek side scored 20 points.

Kendrick Ray came off the bench and paced AEK with 18 points on 7 of 11 shooting from the floor and Keith Langford chipped in with 16 points. Dave Dudzinski finished with a game-high 20 points and added 8 rebounds, but he was the only Antwerp player to score in double digits.

AEK have improved to 2-1 and are now tied with RASTA Vechta and San Pablo Burgos in second place in the group, while Antwerp have slipped to 1-2.

Turk Telekom led by as many as 26 points but had to turn back a persistent Lietkabelis to claim a 91-77 win on the road and remain the only undefeated team in Group A.

The Turkish side made the most of their dominance inside to race to a 47-21 lead shortly before the half-time break. Turk Telekom won the battle on the glass 37 to 25 and scored 44 paints in the paint, to Lietkabelis' 24.

The Lithuanian team however found success from long range in the second half and appeared destined to complete an epic comeback when Ken Brown, who had just missed a three-pointer seconds earlier, drilled a shot from downtown to tie the scores at 75-all with 3:44 left to the final buzzer.

But Turk Telekom's reply was swift as Muhammed Baygül sunk a jumper and R. J. Hunter followed up with a big three to instigate a 10-0 run for the visitors that lifted them to an 85-75 lead with 1:22 remaining.

Hunter went 7 of 8 from beyond the arc to collected 25 points, also adding 5 assists, while Baygül finished with 21 points, 6 rebounds and 5 assists. For Lietkabelis, Zeljko Sakic had a near double-double of 18 points and 9 rebounds in a losing effort.

Turk Telekom are now the sole leaders of the group at 3-0 while Lietkabelis are bottom of the group with three defeats in as many games.

Bamberg jumped in the driver's seat shortly after the opening exchanges and drove out of Turkey with their first victory in this BCL season, 76-66 over Gaziantep.

The German team got a valuable contribution from their bench players who scored 40 points, while Gaziantep's second unit only had 20 points. Bamberg were also a solid 14 of 16 from the foul line, while the hosts only made 6 of their 15 free-throws.

Bamberg led by as many a 18 points in the first half and when Gaziantep reduced the gap to single digits, 55-47 early in the fourth quarter, the visitors quickly eliminated any thoughts of a comeback as Kameron Taylor drilled a triple 7:48 from the final buzzer to stretch the lead back to double-digits, 62-49.

Paris Lee paced Bamberg with 13 points and 6 assists, while Kameron Taylor, Christian Sengfelder and Elias Harris had 11 points each, with the latter also bringing down 6 boards. Jason Rich, who just recently joined Gaziantep and played his first BCL game with the Turkish team, finished on a game-high 17 points.

Bamberg have improved to 1-2 while Gaziantep remain bottom of the group standings at 0-3.

Czech champions Nymburk claimed their 36th consecutive win in all competitions in very convincing fashion, as they led Riga almost from start to finish en route to a 91-72 victory on the road.

Jaromir Bohacik drilled a triple on a Petr Benda assist 6:56 from the end of the first period to give Nymburk a 9-6 lead and the visitors never looked back, stretching the lead to as many as 32 points in the second half.

Nymburk, who out-rebounded their hosts 43 to 25, gave playing time to everyone on their 12-man squad and players coming off the bench contributed 39 points.

Bohacik led the way for the winners with with 16 points, 5 rebounds and 2 assists while Roko Rogic came off the bench and finished with 14 points, 5 assists and 4 boards. For Riga, Arturs Kurucs collected a game-high 21 points in a losing effort.

Nymburk are joint leaders of Group C, together with Iberostar Tenerife, while Riga have slipped to 1-2.

Sassari pulled away decisevely late in the opening quarter and kept Oostende at arm's length the rest of the way to claim their second win in Group A, 90-71.

With the scores tied at 14-all and 3:51 left in the first frame, Michele Vitali drilled a triple on a Marco Spissu assist and sparked an 18-3 run by the Italian team to close the quarter.

The hosts capitalized in the best possible way on Oostende's mistakes and scored 21 points off turnovers, to the Belgian side's 9 points, despite the fact Oostende committed only one turnover more than Sassari.

Oostende did not help the case by wasting an eye-popping 11 of their 17 free-throws.

Miro Bilan paced the winners with 23 points on 10 of 15 shooting from the floor and added 5 rebounds, Vitali finished with 17 points while Dyshawn Pierre posted a double-double of 15 points and 13 boards. Shevon Thompson had 15 points and 7 rebounds for Oostende in a losing effort.

Sassari have improved to 2-1 in the group standings, while Oostende have dropped to 1-2.

DJ Seeley came up with a big defensive play at the death and Zaragoza survived a huge scare to defeat a hard-as-nails Falco side 70-69 at home.

In a too-tight-for-comfort contest in which neither team ever led by any meaningful margin, Zoltan Perl gave Falco a 69-68 lead with an amazing spinning move 30 seconds from time.

Zaragoza called a time-out and drew a play for young sensation Carlos Alocen, who took the lane and drove to the Falco basket but his floater rimmed out. The attentive Nemanja Radovic however timed his effort better than anybody and tipped the ball in to put the hosts ahead 70-69 with 10 seconds remaining on the clock.

The hosts still had a couple of fouls to give and used them to good effect, preventing Falco from firing off a shot, and when finally Ron Curry received at the baseline with just 3 seconds remaining, Seeley stole the ball from his hands.

Radovic led Zaragoza with a double-double of 14 points and 11 rebounds, while Robin Benzing also had 14 points and added 4 boards and 3 assists. Perl finished with a game-high 15 points in a losing effort.

The Spanish team have now climbed to 2-1 on the Group D table while Falco have dropped to 1-2.

Dijon used an excellent start to the third frame to put some distance between them and Brindisi and clinched an ultimately comfy 95-79 win at home to maintain their perfect record.

The French side went into the locker rooms at the break holding a slim 43-41 lead but David Holston knocked down three treys in quick succession during the opening stretch of the third frame to instigate a 17-6 burst for the hosts.

Brindisi momentarily reduced the gap back to single digits, 71-62, but Abdoulaye Loum came up with a put-back off a rare missed Holston triple just before the third buzzer and Brindisi had no energy left to mount a comeback attempt in the final stanza.

The hosts shot an excellent 11 of 22 from beyond the arc, with Holston finishing 4 of 7 from downtown as he collected a game-high 17 points and dished out 9 assists.

Michael Young and Axel Julien had 15 points each, with the former adding 5 rebounds and the latter distributing 5 assists. Tyler Stone finished with 16 points and 5 rebounds in a losing effort.

Dijon stand atop Group D as the only team on a 3-0 record while Brindisi have dropped to 1-2. 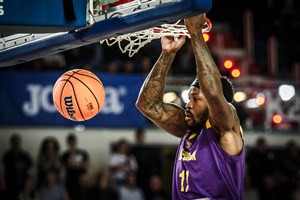 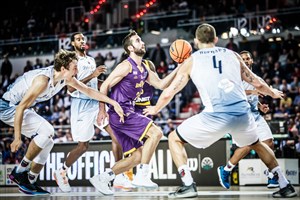