MIES (Switzerland) - Did you know which player emerged as a true nemesis to French teams in the first four years of the Basketball Champions League, which country's teams have historically shown the best offense and which ones the best defense?

We take a closer look at some fun facts about the...national traits of the teams that took part in the first four years of the competition.

Former AEK and Virtus Bologna star Kevin Punter, who has recently joined Italian powerhouse Olimpia Milano, is a two-time BCL champion and earned both the Final Four MVP accolade and a spot on the Star Lineup in 2019.

But there was one thing that motivated the charismatic guard even more than winning titles during his time in the BCL, and that was playing against French opposition!

Punter is the only player in the history of the competition to have scored more than 150 points against teams from the same country. He scored a total of 189 points against French teams, with SIG Strasbourg proving his favorite victim.

He crossed paths with Strasbourg on four occasions in the 2018-19 season, when he was playing for AEK, and averaged 20.8 points per game against the Alsace club. The only French team to have never really suffered the... wrath of Punter were Le Mans, who kept him to just 6 and 12 points, respectively, in the two games he played against them as a Virtus player in 2018-19.

Israeli buckets and the Baltic connection

The two Israeli clubs that took part in the inaugural edition of the BCL, Ironi Nahariya and Maccabi Rishon, relied mostly on their solid defense and finished near the bottom of the league (29th and 30th, respectively) in points per game. That changed though in subsequent years as Hapoel Bank Yahav Jerusalem and UNET Holon arrived in the BCL and spiced things up with their offensive-minded approach.

In fact, it changed so much that after just four BCL seasons, teams from Israel are now averaging a competition all-time high 81.4 points per game, and if we delve a little bit into their collective stats it's not difficult to find the reasons fuelling their offensive prowess.

For some reason, the free-throw line is the only part of the court from where Israeli teams have not shot the ball so well historically. It is indeed safe to say the line is an entirely Baltic domain.

Teams from Latvia are collectively shooting 75.4 percent from the charity stripe and teams from Lithuania are in second place, with a free-throw shooting percentage of 74.9 percent. The Lithuanians however are the absolute masters of getting to the line, averaging 15.3 made free-throws per game, more than any other country.

The more, the merrier in Greece

🔙 Flashback to last season when @PAOKBasketball's @jjsticks01 dropped the HAMMER 🔨

Best #BasketballCL dunk of all time? ⤵

While there are teams that strive to maintain their core year after year, for most European clubs a roster overhaul every couple of years is an almost inescapable fact of life. But no club that has ever competed in the BCL has undergone as many roster changes as PAOK.

The Thessaloniki club, which took part in each of the first four editions of the BCL, has fielded a total of 51 different players in that stretch. That would be the equivalent of presenting an entirely new 12-man roster every year and then making (almost) one change midseason, every season.

Two clubs share second spot behind PAOK and one of them is AEK, another Greek side. The Athens club and Spain's Iberostar Tenerife have each used 49 different players during their four campaigns in the BCL.

One of course could point out that both Tenerife and AEK have shiny BCL silverware in their trophy case to show for their efforts in the competition, so they might know something about the advantages and disadvantages of roster continuity that other teams don't.

AEK is also the BCL club that has mixed up its starting five more than any other in competition history, as no less than 41 players have got the nod in a starting lineup in the yellow-black jersey.

On the opposite end of the spectrum were Fribourg Olympic and Fraport Skyliners, as both the Swiss and the German side only used eight different players in their starting lineups in the competition.

No scoring please, we are Spanish

The Spanish Liga Endesa is widely regarded as the best domestic league in Europe and European basketball's worst-kept secret is probably that what makes playing against Spanish teams so challenging is that it's difficult to score on them.

Teams from Spain have collectively given up fewer points, 73.4 per game on average, than teams from any other country in competition history (excluding countries that were represented by only one team in these four years).

The explanation for this is not however reflected in some of the usual defensive metrics: Teams from Serbia have been the dominant force in blocks, averaging a collective 3.4 per game, and in rebounds, averaging 39.1 per game over the first four years. Meanwhile Greek and Hungarian teams are the league's historical leaders in steals, averaging 8 steals per game each.

Interestingly, one stat category where Spanish teams have a clear historical lead in the BCL has nothing to do with defense - teams from the Iberian country average collectively 9.2 made triples per game, when every other country's teams averaging fewer than 9 made threes. 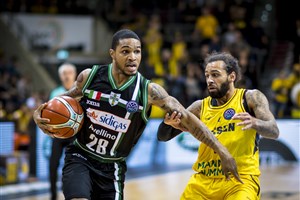