MIES (Switzerland) - The Basketball Champions League offers such a wealth of statistical data that a lot of useful - but unusual - information has passed under the radar in the first four years of the competition.

So, we take a closer look at some fun figures that you might have wondered about, but never knew were there!

If you consider plus/minus as the statistical category which better reflects a player's true contribution, then you must want Tim Abromaitis on your team. The American power forward, who spent three seasons competing in the BCL with Iberostar Tenerife, has a mind-blowing cumulative plus/minus of +499, the highest in competition history.

Sylven Landesberg is the player you turn to if you are playing on the road and are in need of scoring. The Israeli-Austrian winger who played for Movistar Estudiantes in the 2017-18 season scored a total of 149 points on the road and 68 at home for the Madrid club.

If, however, you need somebody to take a crucial free-throw, then pick either one of Tomas Delininkaitis or Zeljko Sakic. The Lithuanian guard and the Croatian forward are the only players in BCL history to have recorded six games with 100 percent accuracy from the charity stripe (on a minimum of 5 free-throws attempted in each game).

Interestingly, Delininkatis is also the player with the most games off the bench in the competition, as he was never in the starting line-up in any of the 41 games he's played with Neptunas Klaipeda in the BCL.

Ferran Bassas is not only the player with the most appearances in BCL history, as he's played in 70 games, but he also never fouled out of any game during the four years he competed in the league, first with Iberostar Tenerife and then with San Pablo Burgos.

The Spanish point guard actually only came close to fouling out twice, as he got up to four personal fouls in just two BCL games. It's worth pointing out that Bassas is still only 28 years old.

Chris Kramer competed in the BCL only one season, back in 2016-17 with EWE Baskets Oldenburg, but he logged more minutes than some players who have played multiple years.

The American guard is the only player to have stayed on the floor for three full 40-minute games and one 45-minute game. That's right, Kramer didn't sit on the bench to catch his breath even on November 2, 2016, when Oldenburg outlasted Rosa Radom 70-66 in overtime.

The only other player to have stayed on the floor for an entire 40-minute game more than once is Howard Sant-Roos, who did that in two games.

If durability is only measured in terms of starts though, then Tony Taylor is undoubtedly the BCL's Iron Man. The American guard stepped out in 38 BCL games and was in his team's starting lineup for all 38, more than any other player in the competition.

Have you've ever played in the BCL? Then there is a very good chance that Rodrigo San Miguel has scored on you. The veteran Spanish guard has scored against 31 different teams in the competition, with Besiktas Sompo Sigorta the only opponent to escape him.

San Miguel faced the Turkish team twice and didn’t manage to score in either of those two games. No other player has scored against as many as 30 different teams in the BCL.

Dusan Sakota made at least one three-pointer in 35 consecutive games, the longest streak in competition history. The former AEK captain's impressive stretch lasted two years, from October 2016 to October 2018, and he came off the bench in 33 of those 35 games.

The only player to come close to threatening Sakota's streak is Marquez Haynes, who scored at least one triple during a stretch of 25 consecutive games between November 2017 and February 2019.

By contrast, the race for most consecutive games scoring in double-digits is quite close, but Vladimir Dragicevic edged out DJ Kennedy for the honor. The Montenegrin power forward who played in the BCL with Stelmet Zielona Gora and Nizhny Novgorod put together a 17-game stretch of scoring at least 10 points, between January 2017 and March 2018.

DJ (David) Kennedy, who led the league in scoring in the 2017-18 season by averaging 19 points per game for Pinar Karsiyaka, came within just one game of pulling level with Dragicevic as he scored in double digits in 16 games in a row that season.

When it comes to making an all-round contribution though, few players can match the mighty Tashawn Thomas. The Hapoel Jerusalem forward has registered an eye-popping 16 games in the competition of writing his name in pretty much every column in the boxscore. Thomas has had 16 games of at least 1 point, 1 rebound, 1 assist, 1 steal and 1 block.

One-Way Glass: McCrea and Rautins on opposite ends

Javon McCrea is the only player ever to collect 100 rebounds in his BCL career with more offensive than defensive boards. The former Maccabi Rishon and Medi Bayreuth big man brought down 70 boards on the offensive end and 53 defensive boards during his time in the competition.

As a guard, Andy Rautins is far from McCrea in terms of body type and even further on the...rebounding scale. The sharp-shooting Canadian international who played in the BCL with Banvit collected a total of 67 rebounds in the competition, all of them on the defensive glass.

No other player without a single offensive board in the BCL even comes close to Rautins, as former PAOK guard Adam Smith had 35 rebounds on the defensive end and is in second place.

We're in this together: The 2016-17 Banvit lineup and the Djordjevic- Kesteloot bond

What's Slovenian for "if it ain't broke, don't fix it"? Saso Filipovski must certainly know the answer, because the Slovenian coach is the only tactician in BCL history to have used the exact same starting lineup in 17 games.

Under Filipovski, Banvit played 20 games en route to the Final in the inaugural BCL season and he went with the starting five of Jordan Theodore, Jeremy Chappell, Gediminas Orelik, Gasper Vidmar and Edo Muric in 17 of them.

While Theodore, Chappell, Orelik Vidmar and Muric can boast of having been a part of the most used Starting Five in the competition, the respective honor for a pair of players belongs to the duo of Dusan Djordjevic and Vincent Kesteloot, who played together on Filou Oostende during the first three seasons of the BCL.

The Serbian point guard and the Belgian forward coincided in the starting lineup for an unassailable 35 times and despite the fact Kesteloot moved to Antwerp in 2019-20, it's still hard to imagine another duo breaking this record by appearing together in the same Starting Five for 36 games.

It's definitely hard to imagine William Hatcher, Scottie Reynolds, Nemanja Djurisic, Mindaugas Kupsas and Darion Atkins ever being part of such a duo, as these five players are the only to have played for four different teams in the four years of the competition. 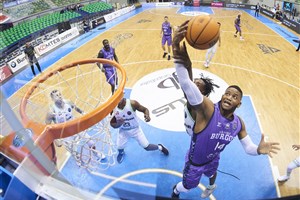 Where we left off: Hereda San Pablo Burgos 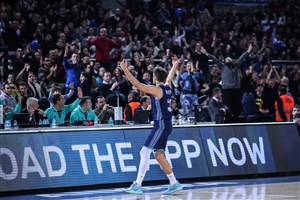