PANEVEZYS (Lithuania) - What does it take for a team to pull a rabbit out of the hat in the very final second of a 14-game Regular Season, when all the odds are stacked against them, the way Lietkabelis did to claim the final ticket to the Basketball Champions League Play-Offs?

I feel comfortable in this role, I don't need to score a lot, I just need to lead and help my team win, nothing else - Zeljko Sakic

Going into Gameday 11, the Lithuanian team were tied with SIG Strasbourg in seventh place in the Group A standings, both on a 4-7 record. UNET Holon were in sixth at 5-6, and BAXI Manresa were standing at 7-4.

When the dust settled at the end of Gameday 14, Lietkabelis had clinched fourth place in the group - and the last Play-Offs berth that was still up for grabs - ahead of all those teams.

They were able to pull it off by focusing solely on things that were within their own control and not on results elsewhere, according to Lietkabelis leader Zeljiko Sakic.

"If I look back now at all that happened, at how we beat Holon in Israel after trailing by five points with less than two minutes left, it seems completely crazy," Sakic told championsleague.basketball

If my team-mates didn't make their shots, first of all we would have lost the game and second there would be no double-double for me, no back-to-back, no nothing - Zeljko Sakic

"We were also lucky at the very end, when on the final possession Holon fouled and our guy [Paulius Valinskas] made all free-throws."

Valinskas received a pass from Sakic and drew a foul as he was rising for a three-pointer, with seven tenths of a second remaining. He sunk all three shots from the foul line, to lift Lietkabelis to a 69-68 win at Holon that sent the Lithuanian side to the Play-Offs.

"I think our comeback truly started the week before, when we were playing our last home game against Strasbourg [on Gameday 13]. We told ourselves that we had to believe we would make it and play until we are through," Sakic said.

Zeljko Sakic paced @BCLietkabelis with 17PTS & 9REB to lift the Lithuanian squad to the W that earned them the final ticket to the #BasketballCL Play-Offs! 🎉 pic.twitter.com/xNyWfS4jCH

"We knew that it would be hard, because we had to win two games against two good teams with bigger budgets than ours. It was a crazy week, and I am just very happy that somehow we made it through."

Lietkabelis found themselves playing catch-up early on, as they started off the Regular Season with four losses in as many games. They refused to throw in the towel.

Nymburk have six or seven Czech national team players, Hapoel are very strong at home and one of the big favorites in the BCL and Zaragoza are third in the Spanish league - Zeljko Sakic

"I think developing team chemistry was the key," Sakic said. "The first month and a half was tough because we were 12 new guys on the team and we lost some theoretically easy games too.

"It's always hard when you have a new team and you have set goals for yourself and for the club. But building our chemistry was the most important thing and once that happened, we started winning."

Lietkabelis off course would not have turned their season around without some outstanding performances by Sakic. In the final stretch of the Regular Season, the 31-year-old forward became the first ever player in BCL history to register double-doubles in different stat categories in back-to-back games.

If we manage to push ourselves over our limit, then we will have a chance. If not, it will be very hard - Zeljko Sakic

"This is my game, but it depends on my teammates really," Sakic said. "When you pass to another guy, he needs to score the ball. So if my team-mates didn't make their shots against Torun, first of all we would have lost the game and second there would be no double-double for me, no back-to-back, no nothing" he added with a laugh.

Sakic has been inspiring his teammates all season long. He leads Lietkabelis in scoring, rebounds and efficiency rating, and he was named on Team of the Week for Gameday 5 and for Gameday 14.

"The coach, the teammates, it's all important to perform well. The coach has to trust me and I have to trust him. We didn't talk a lot about that when I signed for the club, but I knew that I would have a big role and that I would be one of the leaders," Sakic said.

"I feel comfortable in this role, I don't need to score a lot, I just need to lead and help my team win, nothing else. And it has worked so far, because getting into the Round of 16 is one of the biggest things the club has achieved in the last two or three years."

In the Round of 16, Lietkabelis will face the winner of one of the other three groups, in Hapoel Bank Yahav Jerusalem, ERA Nymburk or Casademont Zaragoza. Sakic believes the degree of difficulty will be the same, regardless of which of those three names comes out at the Play-Offs Draw on 18 February.

"Everybody knows that all three are very good teams and have far bigger budgets than ours," the Croatian forward said.

"Nymburk have six or seven Czech national team players, Hapoel are very strong at home and one of the big favorites in the BCL and Zaragoza are third in the Spanish league and every Spanish team is a very tough opponent anyway.

"So, for us this will be a big challenge no matter who we play, and they will be really great games. If we manage to push ourselves over our limit, then we will have a chance. If not, it will be very hard."

👀 @BCLietkabelis' Zeljko Sakic has become the first player in the #BasketballCL this season to have registered double-doubles in both points & rebounds and points & assists (11 points & 10 assists on Tuesday night)! 👏 pic.twitter.com/TDhTqsSE51

Sakic, who first competed in the BCL with Cibona in the league's maiden season in 2016-17, will also be representing Zagreb and his whole country in the Play-Offs. Despite being an excellent ambassador for Croatia this season, he would prefer to see clubs fulfilling this role in the competition.

"It's a pity that there was no Croatian team in the league his season and it would make me happy if there is one next year," he said.

"I think the BCL is great and I always say in Croatia that it's good for teams from my country to play in this competition because it's very tough and it helps them to see where they are in comparison to the rest of Europe.

"I prefer to have to play twice a week, it forces you to take better care of your body and to be smarter about the game. When you only play at the weekend, everything goes slowly." 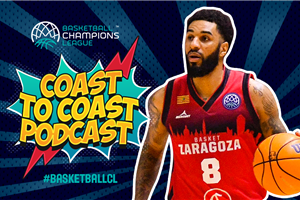 First semester of the season is over: Report Cards are in 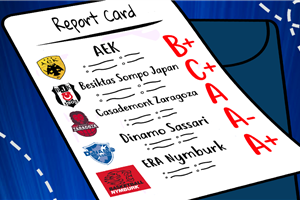