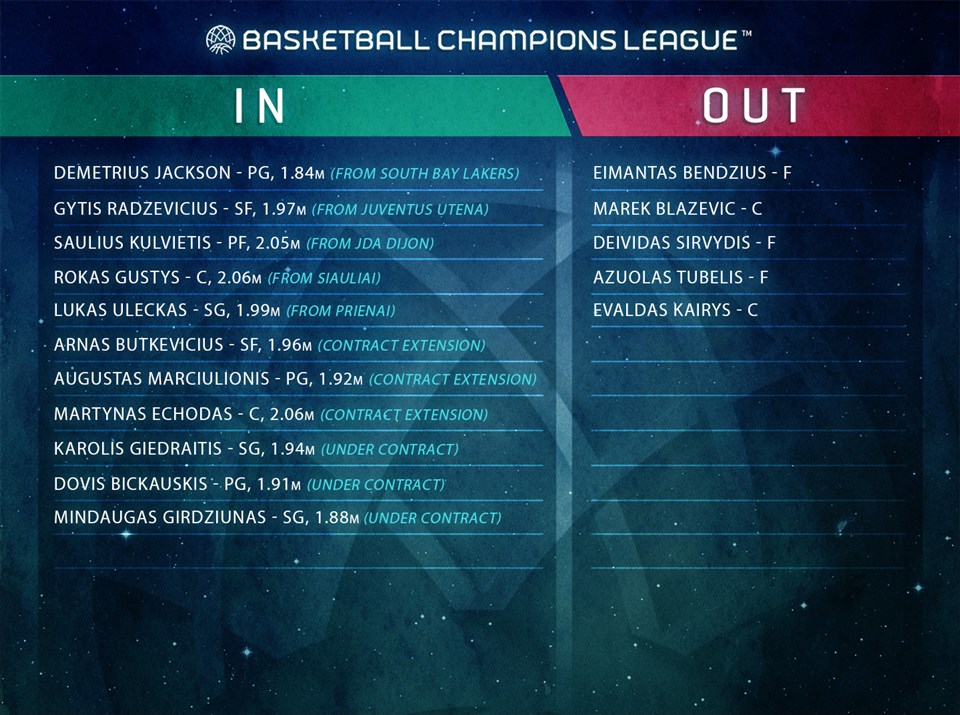 Rytas Vilnius parted ways with head coach Dainius Adomaitis early on in the summer and handed the reins to young Lithuanian tactician Donaldas Kairys who, interestingly, had a short spell at the club as an assistant coach at the beginning of his career.

The latest addition to the Rytas roster is point guard Demetrius Jackson, who has had short stints at Philadelphia 76ers, Houston Rockets and Boston Celtics. The 26-year-old American spent the 2019-20 season at South Bay Lakers and averaged 10 points and 5.5 assists per game in the G League.

Rytas had previously secured the services of 25-year-old Gytis Radzevicius, who is coming off an excellent campaign with Juventus Utena. The Lithuanian winger averaged 11.7 points and 5.5 rebounds per game in the 2019-20 LKL league.

The Vilnius club also added a familiar face by repatriating  Saulius Kulvietis. The 29-year-old power forward who played for France's JDA Dijon last season started off his pro career at Perlas Vilnius, the Rytas affiliate team. Kulvietis averaged 7.3 points and 2.5 rebounds per game in the 2019-20 BCL.

The 'Vilniečiai' have also signed Lithuanian center Rokas Gustys who is coming off a break-out season with Siauliai. Gustys averaged 11.3 points and 6.5 rebounds per game in the shortened, due to the coronavirus pandemic, 2019-20 domestic LKL league.

Rytas also penned up-and-coming shooting guard Lukas Uleckas, a product of the youth system of arch-rivals  Zalgiris Kaunas. The 21-year-old Uleckas averaged 9.7 points and 4 boards per game for Prienai in the 2019-20 LKL season, his first after exiting the Zalgiris youth teams.