MIES (Switzerland) - How many Final Eight-bound teams can fit in an eight-team group? Whether the answer is 3+1, or three certain and one potential, or 'almost half the group', we are still talking about Group C.

At this early stage of the pre-season a lot of estimates and predictions can be very premature, but Group C was the exception in the wake of Wednesday's draw for the 2020-21 BCL campaign: no matter what happens next season, it is certain that Hapoel Jerusalem, San Pablo Burgos, Turk Telekom and potentially Filou Oostende (their Round of 16 series with Iberostar Tenerife is tied at 1-1) have a berth in the 2019-20 season-ending tournament that tips off September 30.

"We’re honored to take part in the BCL for the second consecutive season and we will play every game like it’s a final. Our dream is to qualify for the Play-Offs. We know it will be very hard, but we’ll give it our 100% to make it."

"The BCL has made a big quality leap this year, attracting many competitive teams that have made this competition grow further," San Pablo Burgos GM Albano Martinez told the Spanish version of the Eurohoops website.

"It's going to be an open group where everybody will have their chances. Hapoel and Darusafaka due to their budget might start with a slight with advantage over the others. The rest of us will enter something of a dogfight to advance to the next stage.

We will make some very attractive trips to play against clubs with long tradition and at our home games we count with the amazing support of our fans.

"We are working to build another competitive roster, like the one we had last year, despite having to change some important players. We want to be a competitive team, fight every game to have the chance to win and from then on fight to reach our goals."

"It is going to be a different experience for us, a new start, as we've played in the EuroCup and the EuroLeague before and now we've chosen the BCL," said Darussafaka Tekfen Head Coach Selcuk Ernak.

"We want to be a competitive team in this competition, we are one of five Turkish clubs in the BCL next season. So, we can say that Turkey has a big place in the BCL. It is obvious from now that there will be quality and a different excitement with the new clubs in the BCL.

"I think our group is a tough one. They are all strong teams. It will be hard for us, but we think that qualifying from difficult groups prepares a team better for the next stages.

"Our aim is to qualify as first from the group and to move into the Play-Offs. We have a limited budget for next season. We are happy with our transfer moves so far, within our budget. We are trying to find players that will contribute to our team."

"We will go to Israel, where of course we know the great quality of Hapoel Jerusalem as a team and how well-organized it is as a club. We will also be going to Italy, Belgium, Spain, twice to Turkey and we still don't know who is going to be the last team.

"The games will be very competitive. This shows the progress and the momentum the BCL has gained. There is a lot of excitement to start this season and play these teams, whether at Beaublanc or on the road," the young French coach added.

"We were awaiting the draw with impatience, we hope that everything takes place in the best possible conditions, in a clear and consistent manner. Everybody in the world has a bit of fear right now," said Limoges Sporting Director Crawford Palmer.

"To me it looks like a very interesting group with teams that are not easy. The trips will be tough but going to Jerusalem, Oostende, Burgos which has one of the best home crowds in Europe, it's super interesting.

"We see that the level of the BCL, the format of the competition, they were able to convince some very strong teams to come and join. We were able to avoid some of them and it's up to us to prove worthy of the task ahead."

"We played in the BCL last year too so we have some experience, we more or less know the participating clubs," said Turk Telekom GM Cenk Duraklar.

"Two of the teams that made their way to the Final Eight alongside us, are also in this group. We have landed in a strong group, but we were in a strong group last year too. Therefore, we don't have a problem with this issue, we hope to qualify from the group with a good result, just as we did last season.

"We expect to play in front of our fans after the situation caused by the pandemic. As long as the games are played with spectators, we know that we will qualify from this group with our fans in Ankara. The most important thing for us was to play the games in front of our fans and give them the chance to watch the visiting European teams," the Turk Telekom GM added.

"The BCL has developed into a high-level competition with very strong teams choosing to play here, including ourselves as one of five Turkish teams," commented Turk Telekom Head Coach Burak Goren.

"All the games in the group, including ours, will be very competitive. We were in a tough group in last year's BCL and we are used to it. There is a new element this year in that we will play in last season’s Final Eight and then we will continue with the 2020-21 season.

"It is not easy to comment on the teams at this moment. We can only look at their names and their past, as their rosters have not yet taken their final shape.

"The Final Eight is also very important for us and I think we have a chance to be the champion. We've started our planning to be ready for the Final Eight and we will continue with signing players." 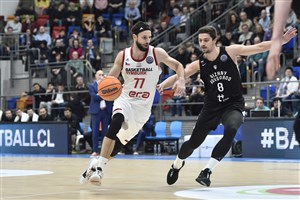