MIES (Switzerland) - Nymburk claimed first place in Group C at the photo-finish as the Czech champions prevailed over a valiant Peristeri at home and leapfrogged Tenerife, who lost to Bamberg in a gripping overtime thriller.

Meanwhile Zaragoza, who added one more big crunch-time display to their portfolio to edge out Brindisi on the road, finished first in Group D ahead of Dijon and Bonn. The German side dropped to third place following a heavy defeat to PAOK in Thessaloniki.

Let's have a closer look at Tuesday's eight-game slate, which included the final games in both Group C and Group D.

Nymburk overcame a slow start and turned back Peristeri late to extend their winning streak to seven games with an 84-72 success at home over the Greek side and clinch first place in Group C, ahead of Tenerife.

The Czech champions topped the group as they finished on a 12-2 record and Tenerife, which had the head to head advantage in case of a tie, fell to Bamberg in Germany and finished at 11-3.

Peristeri led by 9 points on early on but Deishuan Booker, who poured in 21 points in the first half, hit three triples in quick succession at the end of the opening quarter and sparked a timely reaction by Nymburk.

The encounter featured 16 lead changes but the hosts pulled away late in the third frame and led 71-59 midway through the final stanza. Peristeri threw everything at the hosts and reduced the gap to 71-68 but Hayden Dalton knocked down a dagger three 1:40 from the final buzzer to extend the gap back to seven points, 76-69.

Booker finished with a season-high 25 points and Vojtech Hruban chipped in with 16 points and 3 rebounds, while Peristeri's Steven Gray had 18 points, 5 boards and 4 assists in a losing effort.

Santi Yusta had knocked down a three from the corner with just a second remaining to play in regulation to tie the scores at 87 and send the game into overtime.

The Spanish winger then hit another trey to put the visitors in front at rhe start of the extra period and an Aaron White dunk extended their lead to 96-90 with 2:19 left on the clock.

Sengfelder however reduced the deficit with a layup 1:28 from the end and then sealed the deal for the German side, who showcased the true spirit of fair play by competing with all they had on the night despite the fact they would finish fifth in the group regardless of the outcome.

Retin Obasohan paced the winners with 22 points and 7 assists while game hero Sengfelder finished with 17 points. Yusta had 18 points for Tenerife while Marcelinho Huertas, who posted a double-double of 15 points and 11 assists, overcame Aaron Johnson and set a new record for most assists in a single BCL Regular Season with 115 in total.

Nizhny outscored VEF 21-4 in the final 8 minutes to turn the tables on their hosts and clinch an 81-74 win in Riga that seals the Russian team's best Regular Season campaign.

The visitors finish third in the group on a 9-5 record while VEF, who exit this season's competition on a 13-game losing streak, finish bottom of the group.

Brandon Brown paced Nizhny with a double-double of 24 points and 11 assists while Evgenii Baburin shot 6 of 7 from behind the arc and finished with 18 points. For VEF, Lester Medford had 21 points and 4 assists in defeat.

Gaziantep leapfrogged Mornar for sixth place in Group C after the Turkish team scored the last six points of the night to clinch an 86-79 win and snatch the advantage as the two teams finished tied at 4-10.

With Gaziantep leading 80-79 and 1:17 left on the clock, Mornar's latest signing Isaiah Whitehead drove to the basket to put his team in front, but his shot was blocked by Metehan Akyel.

Gaziantep regained possession and Sarunas Vasiliauskas drilled a triple on the other end to stretch the gap to 83-79.

Zaragoza celebrated first place in Group D by doing justice to their reputation as a team that thrives in crunch time, as a Dylan Ennis buzzer-beating floater lifted the Spanish side to a 93-91 victory at Brindisi.

In a tight encounter that featured 20 lead changes and never saw either side lead by a double-digit margin, Brindisi appeared to be breaking away when they grabbed a 72-64 advantage, their biggest all night, with eight minutes remaining.

Zaragoza however clawed back and D.J. Seeley drew a foul with the visitors trailing 91-90 and 13 seconds left on the clock. He made the first free-throw and missed the second, but Alessandro Zanelli stepped on the sideline as he was trying to fire off a three-pointer on the other end that would have likely won it for Brindisi.

With just over two seconds left to play, Zaragoza called a timeout and drew up a play for Ennis, who scored right as the buzzer was sounding off to gift the Spanish team their 10th win in their maiden BCL season.

Seeley paced six Zaragoza players in double digits with 16 points, 7 rebounds and 4 assists while game hero Ennis finished with 13 points off the bench. Brindisi's Dominique Sutton had a game-high 18 points and 8 rebounds in a losing effort.

Dijon clinched second place in Group D in triumphant fashion, as they concluded their best Regular Season campaign with an 88-47 rout of Besiktas at home.

The French side finish second on a 9-5 record, while Besiktas, who also advance to the Play-Offs, take fourth place in the group on a 7-7 record.

The hosts started pulling away shortly after the start of the second quarter, gained their first double-digit lead, 30-19, on a Lamonte Ulmer layup 4:29 from the halftime buzzer, and never looked back.

Dijon forced 22 Besiktas turnovers and scored 31 points off them, while they also run the open floor and scored 22 fast-break points, compared with Besiktas's 9.

Rasheed Sulaimon led five Dijon players in double digits with his 20 points, and added 5 assists, while Axel Julien finished with 16 points, 6 assists and 5 rebounds. Nemanja Djurisic was the only Besiktas player to come close to double digits and he finished with 9 points.

PAOK waved goodbye to this season's BCL by outgunning Bonn 103-84 at home and handing the German side a painful loss that left them third in Group C.

Bonn finish at 8-6, behind Zaragoza and Dijon, while PAOK improve to 5-9 and take seventh place ahead of Brindisi.

The visitors led by as many as 12 points early on but PAOK balanced proceedings by the end of the first half, jumped in the driver's seat in the third frame and pulled away decisively in the final stanza. The Greek side shot 14 of 24 from three-point range, compared with the visitors' 9 of 28 from deep.

Shannon Shorter came off the bench and poured in 23 points to pace PAOK, also adding 3 rebounds and 2 assists. Zisis Sarikopoulos chipped in with a double-double of 10 points and 11 rebounds as well as 4 assists. Branden Frazier had 19 points and 5 assists for Bonn in defeat.

Neptunas outscored Falco 11-2 in the final three minutes of the clash in Klaipeda to topple the visitors 87-83 and end their 2019-20 campaign on a high note.

With the Hungarian champions leading 81-76 and 2:47 remaining, Simas Galdikas converted a layup to spark the hosts' final push and Gytis Masiulis sealed the win for Neptunas from the foul line, eight seconds from the final buzzer.

Deividas Gailius led the way for the Lithuanian side with 21 points, 7 rebounds and 3 assists while Andre Williamson contributed 16 points and 5 boards. Ron Curry and Zoltan Perl had 17 points each for Falco in defeat.

The two teams finish tied at 6-8 but Falco take fifth place in the group ahead of Neptunas, courtesy of their head-to-head advantage. 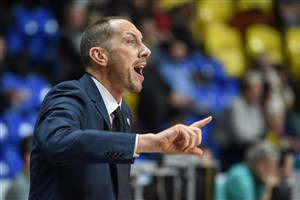