MIES (Switzerland) - ERA Nymburk cruised past Teksut Bandirma in the Czech Republic and Iberostar Tenerife held off Filou Oostende in Spain on Tuesday night, to claim the upper hand in their respective Round of 16 series.

Let's have a closer look at Round of 16 Gameday 1 action in Prague and Tenerife:

Nymburk got 11 players to write their name on their scoresheet and rolled over Bandirma, which only fielded young Turkish players, clinching a comfortable 92-70 win to take a 1-0 series lead.

The Czech champions jumped in the lead shortly after tip-off and used a 16-0 run bridging the first two quarters to pull away decisively in the blink of an eye.

Winger Pavel Pumprla hit a jumper 1:09 from the end of the opening quarter to spark the burst and Hayden Dalton knocked down a three-pointer 8:19 from the halftime buzzer to stretch the gap to 40-19.

The feisty youngsters of Bandirma stopped the rot and reduced the deficit back to 11 points momentarily but Nymburk never allowed them to come within single-digit distance again and led by as many as 29 points after the interval.

🇨🇿 champs win their 25th game in a row in all competitions, taking a 1-0 series lead vs Teksüt Bandirma in the #BasketballCL Round of 16! #Road2Final4

Nymburk scored 25 points on the fast-break compared with Bandirma's 6 points in transition. The Czech side also made the most of the Turkish side's 16 turnovers, scoring 27 points off them. Vojtech Hruban paced the hosts with a near double-double of 19 points and 9 rebounds, while Jaromir Bohacik had 18 points and added 4 boards and 3 assists.

Bandirma, who parted ways with most of their foreign-born players at the weekend, only used seven homegrown players on Tuesday, none of them over the age of 23. Sehmus Hazer finished with 17 points, 5 rebounds and 5 assists, while 17-year-old Alperen Sengun had 11 points and 4 boards in defeat.

Giorgi Shermadini scored a season-high 25 points and Marcelinho Huertas posted his sixth double-double of the season as Tenerife held off a tenacious Oostende 85-75 in the first game of their Round of 16 series.

The Belgian champions led early on but Huertas drilled a triple 4:02 from the end of the first quarter to put Tenerife ahead 16-14, and then came up with a steal for Sasu Salin to get an open look from behind the arc and knock down a triple of his own.

The hosts kept their foot on the gas and an Alex Lopez layup 7:19 from the second buzzer stretched the gap to 38-22, the biggest lead of the night.

Oostende swiftly reduced the deficit back to single digits, although Huertas reached deep in his bag of magic tricks and pulled out the frontrunner for assist of the year, an inbound pass to Shermadini along the length of the court, for the Georgian center to score as the halftime buzzer was sounding off and the hosts to go into the break with a double-digit lead, 48-37.

The Belgian side however would not roll over and they once again cut the deficit to single digits after the break, reducing the gap to just three points midway through the final quarter.

Sasu Salin however drew an unsportsmanlike foul 6:35 from the final buzzer, made both his free-throws and Aaron White drilled a three from the corner to give Tenerife some much-needed breathing space, 71-63. This time Oostende didn't have the energy to make it a one-possesion game again, and Tenerife held on without any drama in the dying minutes.

Shermadinini, who shot 9 of 13 from the floor, had 5 rebounds to go with his 25 points while Huertas finished with 19 points and 10 assists. Big man Yannick Desiron had a season-high 16 points for Oostende in a losing effort.

Oostende played without the injured Shevon Thompson and without his replacement, Mindaugas Kupsas, who only signed with the Belgian side just before the Monday deadline and didn't join his new team in time for Game 1. 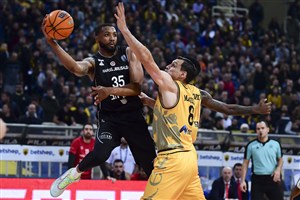 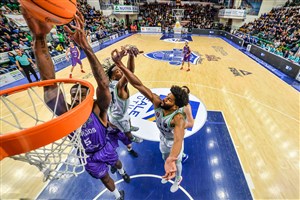