MIES (Switzerland) - On an action-packed Tuesday night, Nizhny Novgorod handed Iberostar Tenerife their first loss in the 2019-20 Basketball Champions League while Falco Szombathely edged out JDA Dijon thanks to a three-pointer two seconds from the end of overtime.

That was but the start to an exciting nine-game slate that also featured road victories for Nymburk, Dinamo Sassari, AEK and Burgos, while Anwil, Besiktas and Hapoel made the most of home-court comforts.

Nizhny snapped Tenerife's seven-game winning streak behind an inspirational performance by Brandon Brown, who propelled the Russian side to a 75-72 triumph in front of their home fans.

The hosts overcame a slow start and shot a fantastic 9 of 12 from beyond the three-point arc in the opening half to establish a 44-40 lead at the break.

Nizhny extended the gap to 68-60 with about five minutes left on the clock but a Fran Guerra baby-hook 2:50 capped off a swift 10-1 Tenerife run that  pushed the visitors ahead, 70-69.

Brown however stepped up and drained a long jumper for Nizhny to regain the lead and, after Sasu Salin missed from close range on the other end, Pavel Antipov tipped-in a Darrlyn Willis miss on the second try to give the hosts a crucial three-point cushion with just 46 seconds remaining.

Nizhny's defense prevented Tenerife from finding an open look from behind the arc for Salin and Alex Lopez had to fire off just before the final buzzer a contested three-point shot which missed the target.

Brown finished with 26 points on 9 of 13 shooting, 5 rebounds and 4 steals while Anton Astapkovich and Artem Komolov chipped in 12 points apiece.

Giorgi Shermadini had 19 points, 7 rebounds and 6 assists in a losing effort for Tenerife, who played without Marcelinho Huertas and Gabriel Iffe Lundberg.

Nizhny have now improved to 5-3 while Tenerife dropped to 7-1 but remain in first place in the group standings.

Marko Filipovity knocked down a triple two seconds from the end of overtime to lift Falco to an 82-81 victory over Dijon, the Hungarian side's fourth success in as many games at home in the BCL.

With the scores tied at 78 and 30 seconds left on the clock in the extra period, Lamonte Ulmer was fouled on a three-point attempt with and converted all of his free-throws to push Dijon ahead 81-78.

Perl drew the foul on the other end with 8 seconds remaining and made his first shot from the line. The Hungarian international missed the second free-throw but got his own rebound and passed in the corner to Filipovity, who calmly drilled the game-winner.

Falco led by as many as 11 points early on but Dijon quickly balanced proceedings for the two teams to trade blows during the rest of regulation and overtime, as the clash featured 19 lead changes.

Perl paced the hosts with 16 points, 6 assists and 5 rebounds, Juvonte Reddic had a near double-double of 16 points and 9 boards while game hero Filipovity finished with 9 points and 6 rebounds.

Dijon wasted a stellar display by Lamonte Ulmer, who had a game-high 25 points as well as 6 rebounds and 5 steals.

Falco have improved to 4-4 while Dijon have dropped to 5-3.

Sassari all but squandered a 20-point lead but held off Lietkbalis down the stretch to secure an 86-82 victory on the road that allows them to stay at the top of the Group A table.

The Italian team came out guns blazing and, propelled by 10 early points from Dyshawn Pierre, raced to a 36-16 lead midway through the second frame.

Lietkabelis however started clawing their way back after the break and Zeljko Sakic sunk two free-throws to reduce the gap to just one point, 72-71, with 4:54 left on the clock.

Sassari used a mini run to open up a 79-71 gap only for the hosts to make it a one-possession game again, but Dwayne Evans drove to the basket and finished at the rim to give the visitors a crucial 81-76 cushion going into the final 40 seconds.

Sassari have improved to 6-2 while Lietkabelis slide to 4-4.

Nymburk held Bamberg to just 9 points in the final frame to celebrate a hard-earned 84-80 victory in Germany and move just one win behind Group C leaders Tenerife.

The Czech champions trailed Bamberg by as many as 12 points in the second quarter but balanced proceedings just before the interval and the two teams traded blows in the third stanza, with the lead changing hands 13 times.

Bamberg opened up a 7-point lead early in the fourth period that proved short-lived as Numburk tightened the screws on defense, and Vojtech Hruban put the visitors ahead 81-80 from the foul line with 46 seconds left.

After Deishuan Booker split two free-throws to make it 82-80 for Nymburg 13 seconds from the final buzzer, Bamberg called a timeout.

The German side decided to go for the win rather than try to tie the scores but Christian Sengfelder's three-point attempt missed the target.

Hruban led the way for Nymburk with 20 points and 4 assists, while Booker and Zach Hankins both had 14 points, the latter also adding 9 rebounds and 4 blocks. Sengfelder finished with 17 points and 8 rebounds in a losing effort.

Nymburk have improved to 6-2 while Bamberg have dropped to 4-4 in the standings.

Besiktas opened up a double-digit lead early in the second quarter and pulled away decisively after the break to clinch a ... win over PAOK at home.

The Turkish team, who have now swept their Regular Season series with PAOK, ended a two-game losing streak while snapping the Greek side's three-game winning streak in the process.

Shaquielle McKissic poured in 15 points in the first 12 minutes of the encounter to lift the hosts to a 29-18 lead with 7:50 left in the second period.

PAOK managed to stop the rot and Besiktas led only 51-41 at half-time, but the Turkish side started off the third stanza on a blistering 12-0 run which Toddrick Gotcher capped off with a triple to stretch the lead to 63-41 and leave the Greek side with a mountain to climb.

McKissic finished with 24 points, 5 rebounds and 4 assists while Jordan Theodore posted a double-double of 12 points and 11 assists, also adding 8 rebounds. For PAOK, Antwaine Wiggins had 25 points and 8 boards in defeat.

The two teams are now tied at 3-5 on the group table.

Ricky Ledo registered an all-round display for Anwil to hit the century mark for the first time this season and clinch a potentially crucial 103-92 win over Vechta at home.

The Polish side, who had started their campaign on a 1-3 record, have now climbed to 4-4 in the Group B standings, tied with the German team.

The hosts jumped in the driver's seat shortly after the opening exchanges and led by as many as 12 points but, when Vechta reduced the gap to 86-84 with 3:23 remaining to play, the Polish fans in the stands braced for a nail-biting finale

Ledo however came up with a personal play and finished with a lay-up and, after the visitors misfired on the other end, Tony Wroten drew a foul and sunk both his free-throws to give the hosts a 6-point lead with 2:44 left on the clock.

Anwil forced 20 Vechta turnovers and scored 20 points off them, while they also run in the open floor on every chance they got and got 29 points on the fast-break.

Hapoel used a fourth-quarter run to shake off a persistent Bandirma and claim an 83-72 win that helps them retain their status as joint leaders of Group B, on a 5-2 record.

The Israeli team have swept the Regular Season series with Bandirma and extended their perfect home streak to five wins in as many games, while Bandirma have dropped to 3-5 and sixth place in the group standings.

The hosts went into the final stanza holding a vulnerable 4-point lead, but a TaShawn Thomas dunk 4:58 from the final buzzer capped off a 9-0 run that stretched Hapoel's advantage to 71-58, and the Turkish side didn't have any gas left in the tank for a late comeback.

For Hapoel, James Feldeine shot 7 of 12 from beyond the arc and led all scorers with 27 points, while Thomas finished with a near double-double of 18 points and 9 rebounds.

For Bandirma, Emanuel Terry posted a double-double of 14 points and 10 boards while Tyler Kalinoski, who also scored 14 points, had 8 rebounds and 7 assists.

Burgos held Antwerp to 26 percent shooting from two-point range to celebrate their second consecutive win on the road, 65-60 in Belgium.

The Spanish team led by a comfy double-digit margin for most of the first half but Antwerp climbed back and reduced the deficit to 60-58 points going into the final two minutes.

With 49 seconds remaining though, Ferran Bassas drilled down a triple to give the visitors a 5-point cushion. Antwerp tried to reply as quickly as possible but Luka Rupnik missed from downtown and the visitors held on for the win.

Burgos bench got a valuable 38-point contribution from their bench, while Antwerp's second unit scored only 5 points. Jasiel Rivero, who paced the winners with 15 points and 5 rebounds as well as Thaddus McFadden who chipped in with 11 points, both came off the bench.

For Antwerp, Belgian international Hans Vanwijn had a game-high 19 points and Owen Klassen collected a double-double of 15 points and 12 rebounds.

Burgos have now climbed to third place in the group on a 5-3 record, while Antwerp drop to joint-bottom of the group, together with Pau Orthez, on a 2-5 record.

AEK started pulling away from Pau shortly after the opening tip and led by as many as 21 points on their way to a 79-67 victory on the road.

The Greek team came up with 12 steals, compared to the French side's 3, and scored 18 points on the fast break.

AEK have improved to 6-2 and remain joint-leaders of Group B, alongside Hapoel Jerusalem, while Pau have dropped to 2-6. 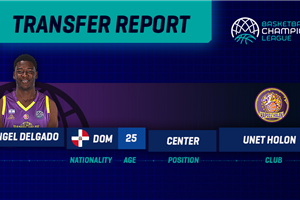