VECHTA (Germany) - Whenever basketball gets tough for Philipp Herkenhoff, the RASTA Vechta forward really just needs to look back on the effort he's put into the game - especially the long trips on his own which have turned him into one of the top young talents in Germany and the Basketball Champions League.

Herkenhoff came into the 2019-20 BCL campaign with a lot of promise, playing on the European club stage for the first time and that coming after a successful end of last season and a strong summer. But the 20-year-old power forward has experienced some highs and lows in the BCL - something entirely normal for a 20-year-old.

Herkenhoff's European debut season has seen him score 14 points against EB Pau-Lacq-Orthez on Gameday 2 and he picked up 11 points versus San Pablo Burgos on Gameday 7. But he also went scoreless in 11 minutes against Teksüt Bandmira and twice had two points. For the season, he is averaging 5.7 points on 40.0 percent three-point shooting, 1.1 rebounds, 0.4 assists and 0.6 steals in 14 minutes a game for Vechta.

"I have had lots of ups and downs. I need to learn to play more consistently and raise my game to the next level," said Herkenhoff, who will play the full season at age 20. "I feel that the international game is refereed differently than the (German) BBL (league). You have to get accustomed to that first."

Ask Herkenhoff when he thought basketball might turn into a career for him, and he recalls his time as a 14-15 year old when he would take long trips to practice with the Artland Dragons. Three times a week he would travel from his home in Hagen am Teutoburger Wald to Quakenbrück. That meant usually his parents bringing him to the train station in Osnabrück - about 15 kilometers away. Then he would take a 40-minute train ride to Quakenbrück.

"Most of the time I would do my homework or study for class," said Herkenhoff, who sacrificed the time which many of his classmates would spend partying or hanging out with friends.  "I had a feeling already pretty early that I could achieve something, otherwise I wouldn't have put in all the effort or always going 1.5 hours to practice.'

Basketball entered Herkenhoff's life pretty early as he regularly watched his mother play the game in his hometown of Hagen am Teutoburger Wald.

"When I was a kid, my mother played in the second division and I went to every game," he remembered his time dating back to a 5 year old.

Growing up, Herkenhoff didn't really need to think long and hard about a role model as Dirk Nowitzki was the man for young Germans.

"I think just like every young German, I followed Dirk Nowtizki's career and he is a major role model for me both personally and on a basketball level," he said.

Herkenhoff's early days were with the Young Dragons and in 2014 he helped the club to its first U16 German JBBL national title along with Isaiah Hartenstein. The Young Dragons reached the U16 final the next season as well, albeit losing to Porsche BBA Ludwigsburg though Herkenhoff was named the MVP of the 2015 JBBL Final Four.

During that season, Herkenhoff was also invited to the Jordan Brand Classic in the United States and the 2015 summer saw him play for Germany for the first time at the FIBA U16 European Championship 2015, averaging 10.1 points, 7.1 rebounds, 1.8 assists, 1.6 steals and 1.0 blocks.

Ahead of the 2015-16 season, Herkenhoff made the move to nearby RASTA Vechta, earning two appearances in the ProA that season while also winning the 2016 Rookie of the Year award in the U19 NBBL league. In April 2016, he helped Germany win the biennial Albert Schweitzer Tournament and then played for his country again in December 2016 at the FIBA U18 European Championship, where Germany finished fourth to qualify for the FIBA U19 Basketball World Cup 2017 - the country's first appearance in the competition since 1987.

The 2016-17 season saw him play five games in the German top flight as Vechta earned promotion from ProA. Those first two campaigns with Vechta also gave Herkenhoff a chance to play with Derrick Allen, who was one of the top US-born veterans in Germany.

"I learned a lot from my teammates. For example Derrick Allen, who always supported me at practice during his playing days and gave me tips how I could do things better," Herkenhoff said of Allen, who now serves as a Vechta assistant coach after retiring at 39 years old in 2019 following 16 years of professional basketball in Europe, 14 of those in Germany - including 2015-16 in ProA second division.

Fifth place at U19 World Cup

Those lessons with Allen helped Herkenhoff learn also to take more responsibility when returning to playing against his like-age players, including for Germany at the FIBA U19 Basketball World Cup 2017, where he collected 6.4 points, 2.7 rebounds and 1.0 assists as a bottom-level player. The team lost to United States in the Quarter-Finals before grabbing fifth place.

"The US had a very good team, which was more athletic than us. We managed to stay with them for a while and play at the same level as the United States," he said. "It was a big success for us to even be at the World Cup and then also to finish fifth." 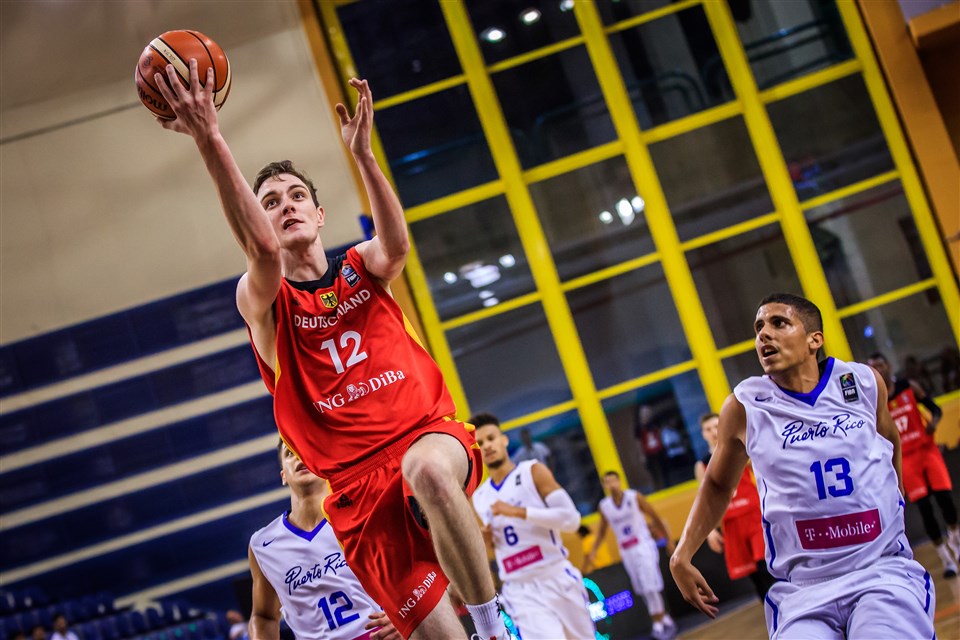 Establishing a role with Vechta

Those looking for Vechta on a map should not expect a big dot next to the name. It's located in northwestern Germany about 100 kilometers from the Netherlands border. The city of about 14,000 is "very rural" as Herkenhoff describes. But the city has built up a love affair with RASTA Vechta - which reached the BBL for the first time in 2013, going directly back to ProA the next season before getting back up in 2016. Again, their stay in the top flight lasted just one season. But instead of two years in the second division, Vechta were immediately promoted back to the BBL in 2018. Herkenhoff said the fans are a major part of the club.

"We are a very motivated team and always want to win. That's why our fans are always behind us," said Herkenhoff, who began establishing a role in the top team in 2017-18 as he picked up 7.6 points, 3.8 rebounds and 1.5 assists in the ProA as an 18-year-old.

Vechta won the 2018 ProA title but lost their coach Douglas Spradley. The club decided to hand the reins to his 34-year-old assistant coach Pedro Calles, the Spaniard serving his first season as a head coach. Herkenhoff had a front row seat for Vechta's magical 2018-19 season, which saw them knock off German league powers such as Alba Berlin, Brose Bamberg, FC Bayern Munich and EWE Baskets Oldenburg  and finish fourth in the regular season.

The season also saw Herkenhoff earn one of the highlights of his basketball career. On November 13, 2018, German senior national team coach Henrik Rödl nominated the 19-year-old for the fifth window of the FIBA Basketball World Cup 2019 European Qualifiers.

"It was a special day. I remember, I was eating with my parents and a call came from Henrik Rödl and he invited me. I was so excited," he recalled.

And after years of representing Germany at the youth ranks, Herkenhoff finally wore the black, red and gold of the senior team on November 30 versus Greece in Patras and then playing 2:50 minutes against Estonia in Ludwigsburg on December 3.

"I learned a lot from the experienced players and took that home with me," he said.

Armed with the confidence of playing for Germany, Vechta needed Herkenhoff to take more responsibility in last season's opening playoff series against Brose Bamberg - a nine-time German champion that reached the Final Four of the Basketball Champions League. The Cinderella club was missing a number of players and had a seven-man rotation. But that didn't stop them from knocking off Bamberg 3-1 in their best-of-five series - thanks in large part to Herkenhoff, who put up probably his best stretch of play as a professional, averaging 15.8 points on 57.8 percent shooting including 50.0 percent from long range and 85.7 percent from the foul line while also picking up 7.0 rebounds and 1.5 steals.

"I got a lot of playing time and responsibility, and I said to myself to be more aggressive. That worked very well and I am proud of being an important part of the playoff success," he said.

Herkenhoff only played in 27 minutes over two games in the semi-finals against eventual champions FC Bayern Munich with 2 points and 2 rebounds total as Vechta's dream season came to an end.

Herkenhoff's season was followed with the FIBA U20 European Championship 2019 in which he was one of the go-to guys for Germany, who collected third place in the tournament for the second straight summer with Herkenhoff being named to the All-Star Five.

"I knew that I had a lot responsibility on my shoulders for the team but in the end it was a good team performance and we had a strong finish," said Herkenhoff, who averaged 16.0 points, 8.2 rebounds and 3.0 assists. "Hardly any of us had imagined that we would reach the Third Place Game and we were very motivated to win."

The 2019 summer also saw Herkenhoff put his name into the NBA Draft but then pull it out before re-signing to return to Vechta.

"I had a few offers from German clubs and a couple abroad, but I decided for Vechta because I thought the combination of school and practice was very good."

Herkenhoff is still learning in the game. His ups and downs have been in the German BBL as well, as he has scored three or fewer points in five of his 11 games - including three times going scoreless. But he also tallied 13 points against Alba Berlin as well as 20 points against Basketball Löwen Braunschweig. The Braunschweig game made one think of his performance against Bamberg from last season as Vechta basically only had nine players and he scored 12 of his 20 points in a fourth quarter in which the team came back from 27 points down to win at home 106-103.

"That was incredible. I have never had a game like that with such an ending," said Herkenhoff, who was Vechta's leading scorer in the game.

That game was followed a couple days later by Vechta pulling off a strong upset in the BCL with a 79-72 win at AEK Athens.

"In the end, it was a victory like any other, but of course it was something special, playing in that arena and that atmosphere."

It was also just another step for Herkenhoff as he realizes those long trips to practice early on have paid off. The Next Step - a closer look at RASTA Vechta 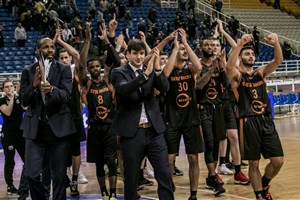