MIES (Switzerland) - Iberostar Tenerife held off Peristeri in a gripping battle between previously unbeaten teams, while UNET Holon poured in a record 122 points in the highest-scoring game in Basketball Champions League history.

Nizhny held Mornar Bar scoreless during a five-minute stretch in the third quarter and emerged victorious 89-69 in the Russian side's home opener in the 2019-20 Basketball Champions League season.

The hosts raced to an early 13-point lead in the first frame and appeared to be running away with the game but Mornar switched to zone defense and, propelled by Jacoc Pullen's three-point shooting, tied the scores at 36-all with 2:45 remaining to the half-time buzzer.

Nizhny returned from the locker rooms determined to limit the Montenegrin side's transition scoring and Alec Brown drilled a triple with 7:16 left in the third period to spark a 15-0 run.

The Russian team went into the final stanza leading 69-51 and extended the gap to as many as 24 points midway through the fourth period. Nizhny finished with 26 assists, came up with 8 steals and scored 20 points off Mornar's 13 turnovers.

Darrlyn Willis hardly put a foot wrong all night and led the hosts with a double-double of 21 points, on 9 of 15 shooting from the floor, and 10 rebounds. Brandon Brown also collected a double-double, of 15 points and 12 assists, while Brown finished with 18 points. For Mornar, Derek Needham finished with 20 points, 8 rebounds and 6 assists.

Nizhny have improved to 2-1 in the Group C standings while Mornar remain bottom of the group with three losses in as many games.

Anwil prevailed 95-87 over Pau-Lacq-Orthez in an entertaining encounter to finally tick the win column in this season's Basketball Champions League.

The Polish side rode the hot hand of Tony Wroten, who poured in 16 first-half points on 6 of 7 shooting from the floor, to grab a 52-40 lead at the break.

Pau-Lacq-Orthez stayed close but the hosts appeared to be pulling away for good with about 7 minutes left to play in the final frame, when first Wroten converted a three-point play and then Jakub Karolak nailed a triple from the corner to stretch the gap to 84-68.

The French visitors however still had some gas left in the tank and, after Travis Leslie knocked down a trey, Cheikh Mbodj came up with an offensive rebound and scored with a lay-up 2:24 from the final buzzer to reduce the deficit to 91-85.

Latvian power forward Rolands Freimanis however replied with a two-handed dunk to restore an 8-point lead for the hosts, 93-85, and then he blocked an Mbodj shot at the other end of the floor to seal the hosts' victory.

Wroten led seven Anwil players in double digits with his 23 points and 4 assists, while Freimanis finished with 12 points and Tyrus McGee had 22 points in a losing effort.

Anwil now stand at 1-2 in the Group B standings while Pau-Lacq-Orthez remain bottom of the table as the only team in the group with three losses in as many contests.

Bandirma waited until the third week to claim their first victory but did so in style, as they edged out previously unbeaten Burgos 84-81 in front of their enthusiastic fans in a tight clash that featured 17 lead changes.

The Turkish side grabbed a 9-point lead midway through the opening quarter, but Burgos swiftly closed down the gap and it soon became apparent that this encounter would go down to the wire.

Jaime Smith put the hosts ahead 78-76 going into the final two minutes but both teams wasted their next possessions and Thaddus McFadden knocked down a triple from the top of the key to give Burgos a 79-78 lead with 45 seconds left on the clock.

Smith however replied immediately by drilling a huge three from the corner with 33 seconds remaining and, after Vitor Benite misfired on the other end, Smith again passed to Ian Hummer who made it 83-79 for Bandirma with 15 seconds to play.

After Burgos reduced the gap to 2 points they fouled Hummer and the Bandirma big man split his free-throws 9 seconds from the final buzzer but a Vítor Benite three-point attempt to tie the scores almost at the buzzer bounced out.

Smith led all scorers with 29 points on 4 of 5 shooting from behind the arc, while Omar Prewitt added 16 points. Jean-Pierre Tokoto had a near double-double of 17 points and 9 rebounds in a losing effort.

Neptunas led PAOK from start to finish and pushed back a third-quarter charge by the hosts to cruise to their first success on the road this season, a 94-72 win in Greece.

The Lithuanian side came out guns blazing and opened up a 21-point by the end of the opening quarter. PAOK showed signs of life in the second frame and began chipping away at the difference to finally reduce the deficit to just 2 points, 45-43, early in the third stanza.

Aaron Best drew a foul on a three-point attempt 8:37 from the end of the third period and went to the line hoping to give the hosts their first lead in the game, but he missed all three free-throws and Tadas Sedekerskis made it 47-43 with a lay-up on the other end.

Gytis Masiulis nailed a triple with 6:43 remaining in the period to cap off a 10-0 Neptunas run and extend the visitors' lead to 55-43, and the Lithuanian side never allowed the gap to drop back into single digits again.

The winners shot an excellent 61 percent (20 of 33) from two-point range, as Osvaldas Olisevicius led five Neptunas players in double digits with 12 points and Simas Galdikas collected a double-double of 13 points and 10 boards. Meanwhile Adam Smith finished with a game-high 19 points in a losing effort.

Neptunas have climbed to 2-1 on the table while PAOK are still without a win after three games.

Bonn had to push back a feisty Besiktas over and over again down the stretch but the German side ultimately emerged victorious 86-82 over their Turkish visitors.

Bonn jumped ahead 34-33 on an Anthony DiLeo three-pointer with 3:48 remaining to the half-time break, and the same player drilled a buzzer-beating trey at the end of the third frame to give the hosts their first double-digit lead of the night, 67-57.

Shaquielle McKissic however thought there was plenty of time for Besiktas to turn the tables, and he came up with a succession of impressive plays at the start of the final stanza before scoring with a lay-up 5:32 from the final buzzer to reduce the gap to just one point, 53-52.

Stephen Zimmerman replied on the other end to give the hosts some breathing space but even though Bonn re-built an 8-point cushion, Besiktas kept fighting back.

Jordan Theodore with a lay-up reduced the deficit to 85-82 with 19 seconds on the clock and Besiktas fouled DiLeo. He split his free throws, but the Turkish side wasted time bringing up the ball and Nemanja Djurisic airballed a three-point attempt with less 5 seconds remaining.

Bonn shot an excellent 11 of 20 from beyond the three-arc, led by Branden Frazier who went 4 of 5 from downtown and finished with 14 points. Bojan Subotic added 12 points while DiLeo finished with 11 points and 4 assists. For Besiktas, McKissic finished with a game-high 20 points and James McAdoo just missed out on a double-double, as he had 9 points and 14 boards.

UNET Holon celebrated their first victory in this BCL season in memorable fashion, as they shot the lights out to bring down Torun 122-105 in a contest that broke two BCL scoring records.

The 122 points scored by Holon are the highest offensive output by a team in a single BCL game, while the combined 227 points convert this into the highest-scoring encounter in the history of the competition.

The previous highest combined score was 215 points, and that was after double over-time.

Holon grabbed the lead shortly after the opening exchanges and never looked back.

A Ryan Thompson lay-up with 1:20 left to play in the first half stretched the Israeli side's lead beyond 20 points for the first time, 58-37.

Although Torun had the energy to follow their visitors in this scoring extravaganza in the second half, they never managed to mount a comeback attempt.

Holon dished out a collective 34 assists and shot an outstanding 16 of 30 from three-point range, but even that pales by comparison to their mind-blowing 71 percent shooting from inside the arc (31 of 44).

No less than six Holon players scored in double digits, with Marcus Foster pacing them with his 22 points and 7 assists. Latavious Williams posted a double-double of 18 point and 12 rebounds, while Amit Simhon had 19 points.

For Torun, Chris Wright finished with a game-high 25 points and dished out 10 assists to become the first player to register a double-double in each of his first three BCL appearances.

Strasbourg jumped in the driver's seat right before the first buzzer and pulled away decisively in the second frame to inflict on Manresa their first defeat in the competition, 81-63.

The hosts maintained the gap in double-digits the rest of the way, stretching it as far as 20 points in the final stretch.

Strasbourg scored 46 points in the paint as Jerai Grant and Gabe York led the way with 17 points each. Grant also had 9 rebounds, while York collected 7 boards. Manresa's Jordan Davis also finished with 17 points in a losing effort.

Both sides now stand at 2-1 on the Group A table.

Tenerife held off Peristeri down the stretch to emerge triumphant 72-68 in a direct battle for the top spot in the group and maintain a perfect record after three games.

The Spanish island's team grabbed the lead late in the opening frame and Dani Diez knocked down a triple 7:45 from the end of the second period to give the hosts their biggest lead of the night, 25-13.

The Greek visitors made sure however to stay within striking distance and unleashed their charge in earnest in the final stanza.

Steven Gray drew a foul as he was rising for a shot from behind the arc 1:22 from the final buzzer and sunk all three free-throws to reduce the gap to one point, 66-65.

Sasu Salin replied by making two shots of his own from the foul line and, after Peristeri misfired on the other end, Marcelinho Huertas collected the rebound off a missed Gabriel Lundberg triple.

The Brazilian veteran calmly walked back behind the three-point line and knocked down a shot from deep, stretching Tenerife's lead to 71-65 with just 13 seconds left on the clock.

Diez pace Tenerife with 16 points and 7 rebounds, and Giorgi Shermadini finished with 11 points and 7 boards. Gray on the other hand had a game-high 26 points in a losing effort.

Tenerife lead Group C on 3-0, but ERA Nymburk will join them at the top if they win their game Wednesday. Peristeri have dropped to 2-1 in the standings. 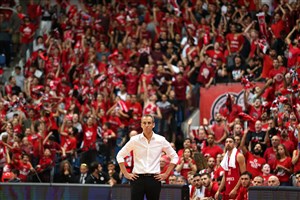 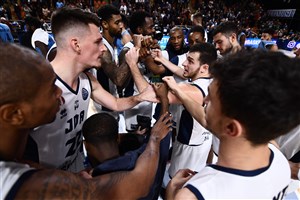