ATHENS (Greece) - As expected both teams went with the same starting lineups from the Semi-Finals. Notably, Rabaseda started matched up on Keith Langford but it was a different pre-game matchup question, that was answered first. Yannick Moreira was a real weapon in the post against Zaragoza, the question was whether AEK would go to him against Dejan Kravic? We didn't need to wait long for the answer. Moreira used a really nice face-up and rip move to win the first battle of the former champs.

There were, however, positive early signs for Burgos and Kravic. AEK is a predominantly halfcourt team and if you are able to contain their guards in the pick-and-roll, then at least you can force them to beat you with tough shots.

In the clip below Kravic stayed in front of Langford until Rabaseda could fight back over the screen, then he quickly got back to Moreira before his roll to the basket could suck in any extra defenders. This left Langford taking a tough shot over Rabaseda and even when it looks like that shot might drop, Kravic swatted it off the rim - an elite defensive possession from the big Serbian.

As expected, AEK also went to Langford early in the post. On the first look at this next clip, it seemed Burgos was happy to guard him 1v1. However, if you watch again you can see that Kravic is in two minds about whether to come over to double. Then look at the layer behind that and you can see Rabaseda fighting to box Moreira out of the middle. This isn't in the event of a shot. If Moreira could get in front, then Langford could make the dump-off pass when Kravic went to double. Kravic could have gone to deter the shot, but - maybe through miscommunication with Rabaseda -he didn't. Penarroya was visibly frustrated.

Everything was going AEK's way to start the game. Soon after this play above, Rabaseda picked up his second foul and had to sit, taking with him the toughest defensive matchup that Burgos could throw at Langford.  The MVP quickly went to work on Benite, scoring a tough runner over some good defense, then another trademark iso on the post.

Burgos' on the other hand, started the quarter ice cold and couldn't buy a shot. The promising signs were there in the quality of shots they generated, they just weren't falling (yet). Then to close out the quarter they did what Zaragoza and Nymburk had failed to do before them. They pushed the tempo and ran at AEK.

It turned out those two transition scores ended up being absolutely vital as AEK sent in the second unit and Tyrese Rice did what Tyrese Rice has done ever since he arrived in Europe. The former MVP hit 7 points in less than two minutes.

Whilst everything was pointing towards another dominant AEK display, it wasn't really that straight forward. AEK were making tough shots from a majority of 1v1 play and on the other end, they had clearly game-planned to go under screens on Renfroe and Cook. The idea was to cut the head off the snake and prevent them from creating. This plan also reduces the risk of kravic dominating the game as the roll man. To begin with, it worked as Burgos started out cold. Then Omar Cook got a wide-open corner 3-ball to get his touch going,.... and the floodgates opened in the second quarter.

Omar Cook went 5/5 in the first half, setting a record for made threes in two-quarters of a final. Once he started knocking down those shots vs the under defense, it was always clear that questions would be asked of the game plan but to answer those questions, you need to know something about the history of this competition - especially for AEK in this arena and especially against Spanish opponents. In 2018 AEK got past a very dangerous Murcia team (a team that also had Vitor Benite) and one of their most successful game plans was to go under on Charlon Kloof.

It's too simplistic to say the gameplan was wrong for AEK. Omar Cook in particular was 1/3 from behind the arc at the Final 8 before the game and shot 36% on the season before with Gran Canaria. It was a calculated risk, Omar Cook just stepped up to the challenge.

This Burgos team had been ruthless once they smelt blood all week and with the sharks circling, McFadden was up to all of his tricks. We had already seen that Burgos were finding ways to push the tempo and get looks in transition, McFadden rammed the point home by leaking out and forcing Papatheodorou to call a timeout.

They didn't just win the battle of transition points either. Burgos also won the battle on the glass with 11 offensive rebounds and the battle of the lineup rotations, as they outscored AEK 55-44 with points from the bench. This next clip of a Miquel Salvo illustrates the point perfectly.

AEK had too many weapons to go down quietly and when they went to a tried and tested action to get Lojeski going from behind the arc in the fourth quarter, it looked like they might find a way back into the game.

Nikos Gkikas is also due some credit for his role in AEK's attempted fightback. Gkikas - like he did all week - made plays defensively and this push in transition was exactly the kind of play AEK needed to create easy looks because they were really struggling in the halfcourt.

Marcus Slaughter made a miracle return to the game after going out injured and made defensive plays as you know he always will. In the next clip, you see a much more customary type of pick-and-roll defense from a Papatheodorou team. Watch how they trap Thad McFadden and force the turnover.

Then there was a brief glimmer when they managed to get a score, a steal from the press, and the chance to score again.

The issue with a press is that it always leaves a team open to mismatches and the opportunity to attack a scrambled defense if it breaks down. And a pressure defense will almost always break down at some point. Alex Renfroe was excellent all game on the defensive end and made so many timely contributions on the offensive end. When he got the chance to attack an injured Marcus Slaughter, the opportunity was there to kill the game and he took it.

AEK will have to consider this huge opportunity missed and we will have to wait and see how many of this roster stay on to play into the new season. On the positive side, they put on an incredible show during the week and reached a second BCL Final. It's pretty clear that AEK's presence at these title tournaments is going to be a consistent theme. They will be back.

For Burgos, this is the most complete fair-tale story their fans could ever wish to see. Over a year ago they came through the qualifiers and now they are champions. The entire season this team has had the most incredible chemistry and the locker room antics have been as entertaining as the team playing on the court. Long may it continue. This is the first European title for a club that was only founded in 2015. They play in front of a raucous, packed home crowd, they win trophies, they have an incredible coach, there is only one direction this club is headed. 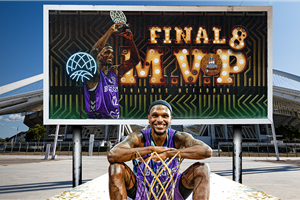 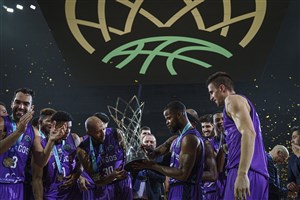