MIES (Switzerland) - On a memorable Wednesday night, Hapoel Jerusalem overturned a double-digit deficit to defeat AEK in a gripping clash between the two contenders that kept the crowd in Pais Arena at the edge of their seats.

Let’s have a closer look at all seven games that took place on Wednesday.

Hapoel outscored AEK 35-18 in the final 14 minutes to come from behind and beat the Greek side 85-78, in a clash which puts forward an early candidature for best game of the 2019-20 Regular Season.

AEK rode the hot hand of Keith Langford, who shot 7 of 9 from downtown on the night, to grab a 60-50 lead midway through the third period. Suleiman Braimoh however drilled a triple with 3:51 left in the quarter to spark an 11-0 Hapoel run and Idan Zalmanson scored almost at the third buzzer to put the hosts ahead, 61-60.

Langford replied with the start of the final stanza to send the visitors back in the driver’s seat but James Feldeine and Braimoh knocked down back-to-back triples to restore Hapoel’s lead, 80-76 with 2:15 remaining.

After Langford, who struggled from the foul line, split two free-throws, J’Covan Brown converted a three-point play and widened the gap to six points, 83-77, going into the final minute.

While AEK shot an impressive 16 of 29 from three-point range, Hapoel held them to just 44 percent shooting inside the arc - the visitors attempted only 27 shots from two-point distance and made 12 of them.

The Ankara side stayed perfect in Group A after delivering a defensive performance that suffocated Sassari down the stretch to claim a 64-56 win over the Italian team.

Turk Telekom held Sassari to 26.6 percent shooting from the floor, with the Italian side going only 1-for-16 from behind the three-point arc during the first half.

The hosts opened up a 15-point lead shortly before the half-time buzzer but Sassari clawed their way back in the third period. With the scores tied at 51-all and 6:17 remaining, T.J. Campbell sunk a jumper to instigate a Turk Telekom 9-0 run.

Sassari finally stopped the rot with a Jamel McLean lay-up 2:13 left on the clock, but Campbell again hit a big shot to put the hosts ahead 62-56 going into the final minute and the Italian side wasted away their next two possessions.

R. J. Hunter paced Turk Telekom with 14 points and 8 rebounds, Kyle Wiltjer collected a double-double of 12 points and 10 boards while Campbell finished with 12 points and 4 assists. Sassari’s Dwayne Evans had a game-high 18 points and added 9 rebounds in a losing effort.

Manresa were made to work extra hard by Lietkabelis but managed to clinch their second win in as many games, 76-70 at home over the Lithuanian team who have now two narrow losses in their first encounters.

The hosts earned a double-digit lead midway through the third frame in a game that had been too close for comfort up until that stage, but it proved short-lived.

Margiris Normantas hit a triple 7:34 from the final buzzer, with Lietkabelis having converted only one of their 15 three-point attempts up until that moment, to tie the scores at 59-all.

William Magarity however replied with a triple of his own 30 seconds later to give the lead back to the hosts. With Manresa leading 71-68, Lietkabelis wasted two consecutive chances to pull even again and Ryan Toolson found David Kravish in the low-post, who scored with a baby hook to give the hosts a 73-68 lead 41 seconds from time.

Kravish led the way for Manresa with 19 points and 5 rebounds, Magarity finished with 17 points, while Zeljiko Sakic and Tomas Lekunas each had 11 points for Lietkabelis.

Antwerp kept their composure in the dying seconds to edge out Bandirma 93-90 in a very close game that could have gone either way and claimed their first win in this season’s BCL, while the Turkish side dropped to 0-2.

Youngster Hans Vanwijn sunk a big triple going into the final minute to make it a two-possession game and the hosts held on until the buzzer to celebrate the victory.

Neither team enjoyed a good shooting night but Antwerp’s solution came in the form of 14 offensive rebounds, which they put to excellent use to score 21 vital second-chance points.

Luka Rupnik led the way for Antwerp with 22 points and 3 rebounds, Ibrahima Fall Faye came up with a double-double of 16 points and 10 rebounds while Victor Sanders also scored 16 points. Bandirma’s Jaime Smith finished with a game-high 23 points on 7 of 11 shooting from the floor and added 2 assists.

Nizhny Novgorod started pulling away from their hosts halfway through the opening quarter and led by as many as 28 points in the third as they cruised to a 73-58 victory at Bamberg.

This was the first win for the Russian team in the 2019-20 BCL season while the German side have lost both their games and are bottom of the group, together with Mornar Bar and Gaziantep.

Brandon Brown scored with a lay-up and drew the foul with 5:53 left to play in the first frame and, although the Nizhny big man missed his free-throw, he sparked a 19-7 burst for the visitors who claimed their first double-digit lead, 26-15, shortly before the end of the period.

Alec Brown hit a jumper 6:10 from the half-time buzzer to cap an 11-1 run for the Russian side and widen the gap to 20 points, 38-18, leaving the German hosts with a mountain to climb the rest of the way.

Brandon Brown led all scorers with 19 points and dished out 9 assists, while Darrlyn Willis had 14 points and 8 rebounds. Elias Harris finished with 15 points and 4 boards in a losing effort.

The Athens team jumped in the lead immediately after tip-off and appeared to be in for a pleasant evening but had to fight off a late Riga push in order to celebrate a 91-83 win.

Peristeri led by double digits for most of the first 25 minutes but Riga started climbing back late in the third and reduced the gap to just three points, 63-60, going into the final frame.

Mike Morrison scored with the start of the final stanza and instigated a blistering run for the hosts, with a William Hatcher lay-up 5:13 from the end extending the gap to 22 points, 84-62.

The Greek side thought their job for the day was done but, incredibly, the Latvians still had enough gas left in the tank for one last charge and held the hosts scoreless for the next four minutes.

Alexander Madsen drilled a three to reduce the gap to 84-78 but Hatcher had seen enough and put an end to the visitors’ hopes by knocking down a long triple 1:01 from the final buzzer.

Hatcher led Peristeri with 21 points on 5 of 8 from behind the arc while Christos Saloustros and Mike Morrison chipped in with 16 points each. For Riga, Roberts Stumbris scored 18 points in just 16 minutes and Lester Medford finished with 14 points and 7 assists.

Dijon produced a showreel of alley-oops in Lithuania to claim their second victory in as many games, 89-75 over Neptunas, and emerge as the sole leader of Group D.

The French side scored inside almost at will, getting 46 of their points in the Neptunas paint. By contrast, the hosts only scored 18 points in the paint. Dijon also got a valuable contribution from their bench players who scored 44 points, while the second unit of Neptunas had 23 points.

David Holston, who came off the bench, drilled a beautiful step-back triple with 6 seconds left in the opening quarter to spark a 10-0 run for Dijon, as a Jérémy Leloup lay-up 6:13 from the half-time buzzer lifted the visitors to a 29-18 lead. Neptunas never came any closer than 8 points again and Dijon even led by as many as 21 points midway through the third frame.

Holston paced the winners with 19 points, 7 assists and 3 rebounds while Axel Julien collected a double-double of 10 points and 10 assists. For Neptunas, Gytis Masiulis finished with 19 points and 4 boards. 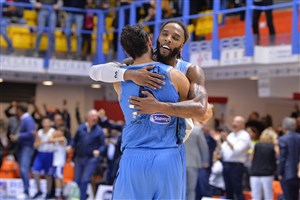 Team of the Week: Brown, McFadden, Horsnby, Banks and Braimoh