MIES (Switzerland) - Did you know which teams are on track for their best -or worse- start to a season, which teams dominate the battle on the glass and who could really use more buckets?

SIG Strasbourg, one of those select few clubs that have participated in every edition of the Basketball Champions League, suffered on Wednesday their heaviest defeat in 53 games in the competition, as they lost to Dinamo Sassari by a 23-point margin, 90-67.

On the flip side, two clubs whose name is also linked inextricably to the history of the BCL and furthermore have achieved talismanic status by conquering the trophy, are still on course to set their best-ever start to a season:

Iberostar Tenerife, who are the only team in the league this year that are yet to taste defeat, stretched their record to 5-0 on Wednesday and are looking to beat their 6-0 start in the 2018-19 season. In 2016-17, the year they were proclaimed BCL champions, Tenerife had started 3-2 and in 2017-18 they stood at 4-1 after the first five games.

AEK, who now stand at 4-1, are facing a taller order if they are to register their best start to a season. The Athens team are chasing an excellent 8-1 initial run from last season, when they lost the opener to Hapoel Jerusalem at home but went on to win 8 straight, including the return fixture against Hapoel in Israel.

In 2017-18, when they ended up lifting the trophy, AEK had started on 2-3 after interestingly losing the fifth game of the season to Strasbourg.

2. Records On The Glass

Casademont Zaragoza brought down 59 rebounds in their 75-60 Tuesday win over JDA Dijon, which is the highest tally since Tenerife's 65 boards in a victory against Opava on January 30 last season. Zaragoza also blocked a league-high 9 shots against Dijon, the most since Virtus Bologna's 10 blocks against Neptunas in October 2018.

Telenet Giants Antwerp collected 56 rebounds in their Wednesday loss to Anwil Wloclawek, which would have been the highest rebound tally this season where it not for Zaragoza's 59 the previous day. In any case, this was the first time that Antwerp had more than 50 boards in their 25 games in the competition.

Falco Szombathely claimed on Tuesday the dubious distinction of becoming the first team this season to fail to score at least 50 points. The Hungarian side lost 74-49 to Besiktas Sompo Sigorta but at least they stayed 11 points clear of Opava's all-time negative record. The Czech team lost 97-38 to Tenerife last January, interestingly a week after scoring only 43 points in a defeat to PAOK.

On Wednesday, VEF Riga finished a quarter in single digits for the first time in their BCL history. The Latvian team scored only 7 points in the first period of their 76-55 loss to Brose Bamberg at home. No team has scored fewer than 7 points in the opening quarter of a game this season.

4. When Two Is More Than Three

If there is one thing that everybody knows about UNET Holon just five games into the season is that it's really, really difficult to stop them from scoring. The Israeli team set on Gameday 3 a new all-time BCL record by scoring 122 points in regulation against Torun, and currently have the league's leading offense, averaging 92.6 points per game.

A big component of Holon's high-octane offense is the fact they shoot an amazing 45 percent from three-point range, but on Wednesday they went against conventional wisdom, at least in recent basketball history.

Dave Dudzinki's monster double-double of 21 points and 22 rebounds not only earned the Telenet Giants Antwerp forward a spot on Team of the Week, but also overshadowed some two excellent displays by great rebounders on Gameday 5:

James McAdoo of Besiktas Sompo Sigorta posted on Tuesday his third double-double this season after getting 12 points and 12 rebounds in his team's win over Falco Szombathely. McAdoo is the only player this season to get 10 rebounds or more in four games.

Emanuel Terry of Teksut Bandirma, who had 12 rebounds in the Turkish side's 81-73 win at RASTA Vechta, has brought down at least 10 rebounds in three consecutive games, which is the longest current streak by any player. 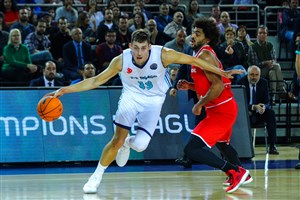