MIES (Switzerland) - Basketball Champions League debutants San Pablo Burgos were the sole team to win on the road on Gameday 1 in the Round of 16, as they prevailed 84-81 at Dinamo Sassari in a gripping encounter that included a 21-point swing in the third quarter.

Let's have a closer look at the six Wednesday games which concluded the first gameday in the Round of 16.

Burgos saw a 17-point lead third-quarter vanish in thin air but Vitor Benite delivered a BCL career-high 30 points and led the Spanish team to an 84-81 win over Sassari on the road in an epic Play-Offs clash.

The visitors led the hot hand of Benite to claim the jump ahead early on and a Jasiel Rivero triple 4:29 from the end of the second period sparked an 18-4 burst and extended their lead to 51-36 at half-time.

Burgos stretched the lead to 17 points with the start of the third frame but Michele Vitali converted a four-point play to spark a swift comeback by Sassari, who even grabbed a 65-61 lead momentarily, late in the period.

A Thad McFadden triple from the corner 8:49 from the final buzzer put Burgos back in front, 73-70, and the Spanish team which had given up 32 points in the third quarter tightened the screws on defense in the final stretch.

Earl Clark came up with a big put back basket 16 seconds from time to give Burgos an 84-81 cushion and Dyshawn Pierre missed on a contested three-point attempt at the buzzer for the Spanish to celebrate their big victory.

Benite collected his 30 points on 7 of 10 shooting from downtown, while Clark finished with 16 points and 7 rebounds. Marco Spissu had 17 points and 4 assists for Sassari in a losing effort.

Veteran T.J. Campbell came up with a BCL career-high 27 points to propel Turk Telekom to an 89-78 win over Besiktas in the Ankara team's first-ever Play-Offs game in the competition.

The hosts built a 10-point lead midway through the second quarter only for Besiktas to tie the scores at 45 with the start of the third frame, and even after Turk Telekom restored their double-digit lead later in that period, the visitors refused to go away quietly.

But when Campbell knocked down a triple 6:21 from the final buzzer to extend Turk Telekom's lead to 76-64, Besiktas appeared to run out of gas and the hosts held their Istanbul rivals at arm's length rather comfortably the rest of the way.

Campbell collected his 27 points on 6 of 9 shooting from beyond the arc and added 8 assists for good measure, while Nick Johnson delivered a well-rounded display and finished with 16 points, 7 rebounds and 6 assists and big man Moustapha Fall put up 17 points and 7 boards. For Besiktas, Toddrick Gotcher had 17 points while Oguz Savas posted a double-double of 12 points and 10 boards.

Turk Telekom's Muhammed Baygül and Ismet Akpinar of Besiktas sustained injuries just before halftime and early in the fourth quarter, respectively, and neither returned to the game.

Game 2 of the series takes place on March 11 in Istanbul.

Hosts Hapoel struggled to get into rhythm in a game played behind closed doors due to the coronavirus outbreak but held Peristeri to just 11 points in the final stanza to clinch a 91-78 win and a 1-0 series lead.

The two teams went toe to toe for most of the opening quarter but Hapoel appeared to be seizing control of the driver's seat early in the second, when James Feldeine knocked down a triple and TaShawn Thomas followed up with a layup to make it 35-23 for the hosts with 7:29 left to the halftime buzzer.

Will Hatcher however drilled three treys in quick succession and Peristeri balanced proceedings before the interval, and then jumped ahead with the start of the third period.

But after a John Holland triple 3:56 from the end of the third frame brought Hapoel back in front, 63-61, TaShawn Thomas came up with a steal for Suleiman Braimoh to dunk spectacularly in transition and the hosts never abolished the lead again.

Hapoel got five players to score in double digits and used a team effort to keep their energy levels high, scoring 26 points off Peristeri's 14 turnovers.

Thomas paced the winners with 16 points and 7 rebounds, while Feldeine and Shelvin Mack finished with 15 points and 5 assists each. Peristeri's Yanick Moreira posted a double-double of 20 points and 11 rebounds in a losing effort.

The contest at Jerusalem's Pais Arena was played behind closed doors in accordance with Israeli Health Ministry guidance following the virus outbreak.

Kendrick Ray produced his best performance in an AEK uniform for the Athens team to survive a thriller that featured 18 lead changes and top Bonn 92-85, claiming a hard-earned 1-0 series lead.

Neither AEK nor Bonn ever led by double-digits in a typical game of runs which saw the two teams trade blows up until late in the final stanza.

With the German side leading 78-77 and 4:05 remaining on the clock, Ray pulled up from deep and drilled a triple to put AEK in front. Bonn turned the ball over on the other side and Ray calmly knocked down almost an identical shot to give his team an 83-78 lead with 3:42 left to play.

The veteran Keith Langord took over in the final minutes, sinking a couple of his trademark stepback jumpers, and Bonn didn't manage to come any closer.

Ray finished with 27 points on 6 of 9 three-point shooting and added 3 assists and 3 rebounds, while Langoford chipped in with 20 points. Bonn's Joshiko Saibou had 19 points and 3 rebounds in defeat.

The second game of the series takes place on March 10 in Germany.

Zaragoza pulled away from Lietkabelis in the third quarter and kept the visitors at arm's length the rest of the way to clinch a 76-67 win at home in what was both teams' maiden Play-Offs game in competition history.

The two sides traded blows throughout the opening frame but Zaragoza edged ahead before the halftime break and started off the third stanza on a 7-0 run which Nemanja Radovic capped off with a jumper 7:49 from the end of the period, to stretch the hosts' lead to 52-39.

Lietkabelis stopped the rot and reduced the deficit to 9 points momentarily, but Zaragoza used another mini burst to go into the final stanza with a 16-point lead, and the Lithuanian side never managed to come within striking range again.

Zaragoza shot the ball poorly from downtown, hitting only 4 of their 20 three-point attempts, but made up for it by out-scoring their visitors 38-16 in the paint.

DJ Seeley and Dylan Ennis led the way for the hosts with 14 points apiece, while Zeljko Sakic finished with 18 points for Lietkabelis in a losing effort.

Dijon used a 14-0 run bridging the final two quarters to gain the upper hand in what was a tight contest up until that point and claimed an 88-73 win over Nizhny in the opening game of their series.

With the scores tied at 56 and 1:45 remaining to the end of the third frame, Saulius Kulvietis drew a foul and made both his free-throws to spark the Dijon burst, which Richard Solomon capped off with a spectacular dunk 8:13 from the end of the fourth stanza.

The hosts got six players in double digits and shot an excellent 71 percent (27 of 38) from inside the arc and scored 46 of their points in the paint.

Game 2 of the series takes place on March 11 in Russia. Sassari blame long break for loss, gear up for win-or-go-home showdown in Burgos 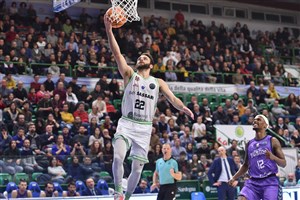