MIES (Switzerland) - Another seven games wrapped up Gameday 9 on Wednesday evening, in what was the last Basketball Champions League action of 2018.

Here is a round up of all the action, including the thriller in Dijon which saw Tyrese Rice and Bamberg overcome David Holston's late game heroics:

Damjan Rudez knocked down the dagger three to lift UCAM Murcia past Ventspils, 67-61, improving to 8-1, two games clear atop of Group A.

With the score tied at 59 heading into the final two minutes, Murcia executed when it mattered, finishing the game on a 8-2 run, with timely threes from Charlon Kloof and Rudez.

Rudez led Murcia with 14 points, Brad Oleson scored 13, whilst Kloof adding 13 and 5 assists including some big plays down the stretch.

Ventspils fell to 3-6, but still have a chance for a spot in the Play-Offs.

Notable Number: 15 - the number of offensive rebounds Murcia hauled in, as they continued their dominance on the glass, converting 15 second chance points.

Fribourg Olympic clinged on to a 77-76 win over Opava, improving to 2-7 on the season.

Back to back three-pointers from Jan Svandrlik made it interesting, pulling Opava to within one with over a minute left, but neither team would score again, as Radim Klecka missed two attempts that would have ended Opava's slide.

Opava fell to their eighth straight defeat in the battle of the bottom two in Group B.

Fribourg were led by 15 each from Dusan Mladjan and Andre Williamson, the latter adding 11 rebounds. Babacar Toure also had a double double with 14 points and 11 rebounds.

Notable Number: 20 - the number of offensive rebounds Fribourg had, dominating the glass 52-37.

Brose Bamberg held on in overtime after a furious late assault from JDA Dijon with a 101-97 victory.

David Holston hit three three-pointers in the final 20 seconds of regulation, including a running triple at the buzzer to force the extra period, before Tyrese Rice came through with his own heroics, knocking down the go-ahead with 7 seconds remaining, before Bryce Taylor sealed it with a dunk after a Patrick Heckmann steal.

David Holston's 29 points and 6 assists would not be enough for Dijon, who fell to 2-7, as Terrence Kinsey added 19 points.

Notable Number: 9 - the number of points Holston scored in 20 seconds left in regulation will remain the talking point of this game, as he pulled Dijon back to force OT.

AEK held on for a 80-76 victory over CEZ Nymburk, surviving a late potential go-ahead three from Bracey Wright to register their eighth straight win.

Vince Hunter knocked down two crucial free throws with five seconds left to put the game out of reach in a contest that went wire to wire.

Dusan Sakota and Vince Hunter led AEK with 18 points each, and Jonas Maciulis chipped in a 15 point, 10 rebound double-double.

Glenn Cosey had 13 points to lead Nymburk, with Petr Benda adding 12 before fouling out.

Notable Number: 25 - the number of lead changes that happened in the game, as it was close right until the final buzzer sounded.

SIG Strasbourg led by as many as 24 before holding off medi Bayreuth down the stretch with a 84-76 win, to end their four game win streak.

With Strasbourg leading from start to finish and seemingly in cruise control through the first three quarters, Bayreuth mounted a last gasp comeback attempt in the fourth period where they poured in 33 points to get it back to single digits before the visitors held their nerve down the stretch.

Youssapha Fall's 17 points and 10 rebounds led five players in double figures for Strasbourg, with Mike Green coming up big down the stretch on his way to 15 points.

Kassius Robertson had 26 points and 5 assists, and De'Mon Brooks added 23 points for Bayreuth.

Sidigas Avellino survived a scare from MHP Riesen Ludwigsburg to register an 82-76 victory.

Having trailed by as many as 20, Ludwigsburg looked down and out, until back to back threes from Jordon Crawford and Clint Chapman punctuated a 10-1 run that tied the game up at 76 heading into the final two minutes. From there, Hamady Ndiaye took over at both ends, along with a timely three from Caleb Green sealed the victory.

Notable Number: 24 - the number of assists Avellino finished with, as they distributed the ball effectively.

Filou Oostende held on for their third consecutive victory, 77-76, over Segafredo Virtus Bologna.

Jean-Marc Mwema's defense came through when it mattered, forcing a tough three by Amath M'Baye that would have proven to be the game winner.

Virtus lost back to back games after starting the season 7-0, as Oostende have thrust themselves back into the Play-Offs battle.

Nemanja Djurisic had 19 points on 8-of-12 shooting, TJ Williams finished with 14, and Elias Lasisi scored 11.

Kevin Punter had 16 for Bologna, and Brian Qvale 13 points and 8 rebounds.

Notable Number: 23 - the number of lead changes, as neither team could gain separation throughout. 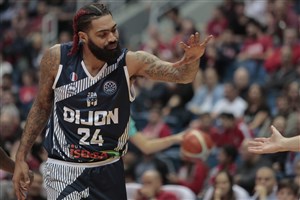 Can Dijon return to winning mode at home vs Brose Bamberg? 35 facts to know ahead of Wednesday's games 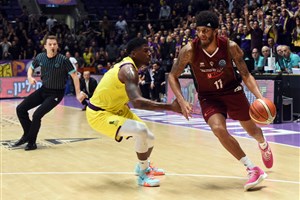