LONDON (England) - In part 1 of this preview, we asked the question: "How do teams win basketball games and which stats are the best predictors?" We then used the"Four Factors of Basketball Success" from Dean Oliver's "Basketball on Paper"  to start our conversation. As a reminder, these are the four factors:

Our first port of call was shooting. Next up, is turnovers. 25% may be slightly heavily weighted but we should also consider that a turnover not only robs you of a shot attempt, but a live ball turnover often leads to a high percentage shot for your opponent in transition.

The place we start with is Turnover Percentage (TOV%). TOV% essentially uses a formula from the box score, to calculate what percentage of a teams possessions are ended by a turnover. Looking at TOV% is more accurate than considering Turnovers Per Game, primarily because more possessions equals more chances to turn the ball over. Consider Nizhny or Venezia that have both played more overtime (and double overtime) periods than any of our other teams. Turnovers Per Game misses an important piece of context when measuring how efficiently they use the ball.

TOV% by itself is only part of the puzzle. Not all turnovers are created equal. We also wanted to look at where each team's turnovers came from. If you know that a team turns the ball over more in transition, and you know that teams generally shoot a higher percentage in transition, you could conclude that those turnovers could be more costly - as you are getting the double-whammy of losing your own high percentage opportunity and increasing the chance of offering one to your opponent.

With that in mind, we looked at each team's TOV% for a selected group of priority play types; Transition, Half-Court, Pick-and-Roll, Spot-Up, and Post Up plays. There is an important distinction to make here...... Firstly, we can no longer use a formula here as a possession may include multiple play types i.e., a Pick-and-Roll may lead to a Post Up and then a turnover in the post. A formula will register a turnover to end the possession but not which play the turnover came from. So we have used TOV% Per Play Type. So, continuing with our example of the Post Up, we are looking at what percentage of times a team used a Post Up and then turned it over. 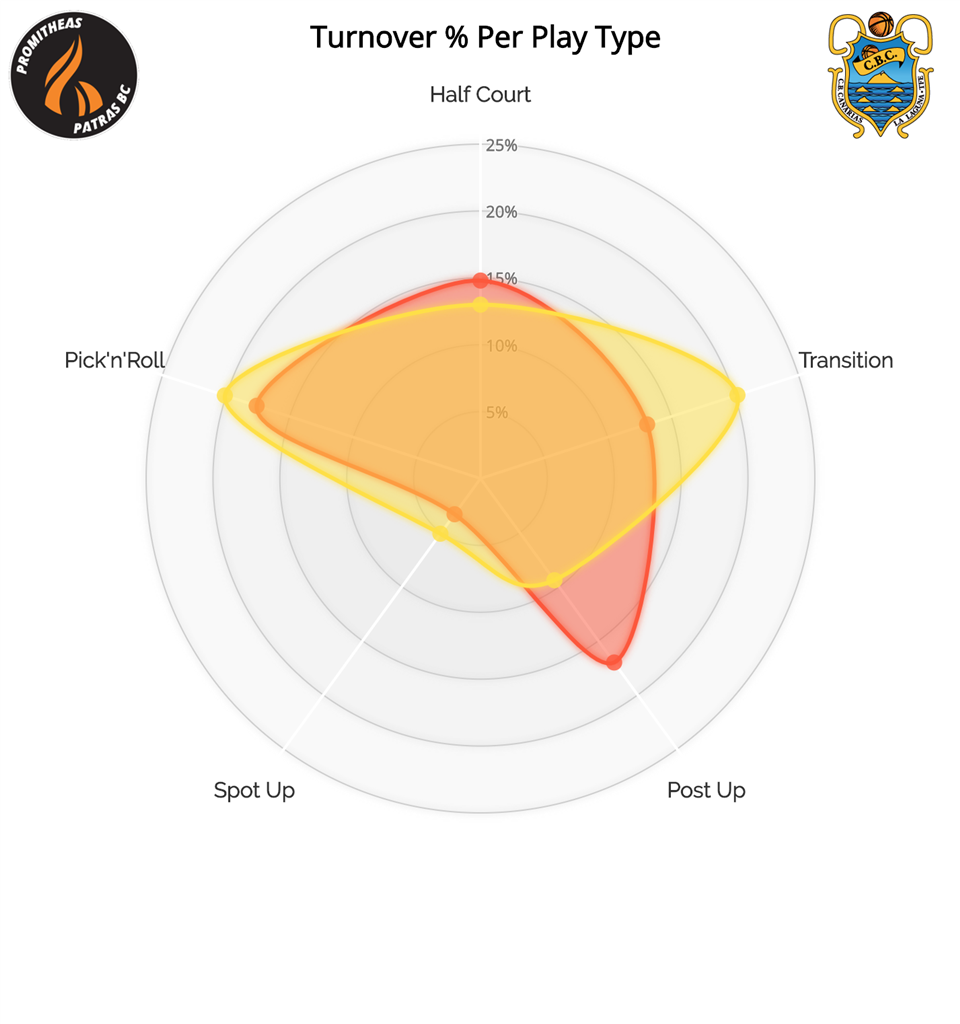 If our shooting preview possibly favored the Canarians, then turnovers possibly turn the tables back toward Promitheas. The Greek's overall TOV% may be higher but they have lower TOV% in the Pick-and-Roll and perhaps more importantly, in transition. For Tenerife, it could be about targeting Promitheas in the post. 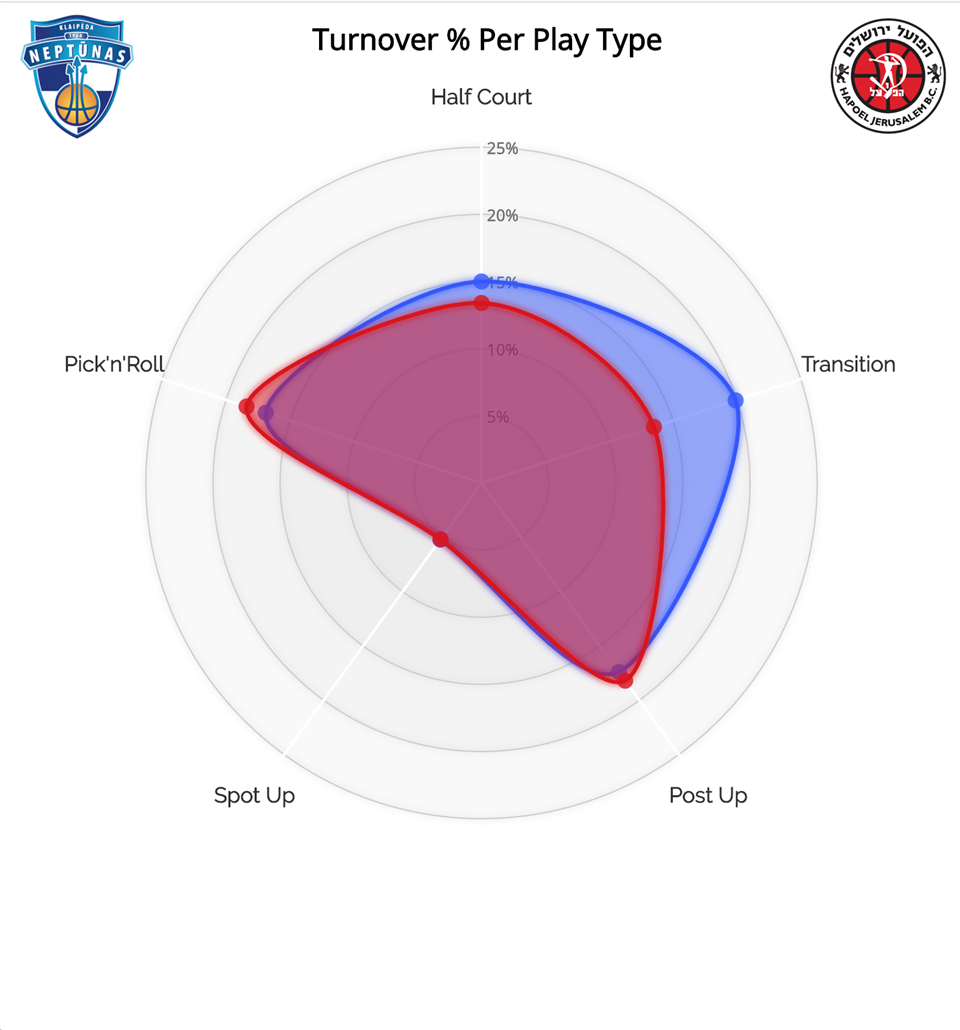 A clear advantage for Hapoel Jerusalem here. The Brigade turn it over less overall and whilst the chart for TOV % Per Play Type is fairly even, the men from the Baltic coast will need to limit their turnovers in transition if they are to hang with the red juggernaut from Israel.

To be clear, the red area is Murcia and the black area is Antwerp. As you can see, Antwerp - who is our youngest team by average age - clearly win the turnover battle over the season so far. A +2 in the overall TOV% was telling enough, but they also use the ball more efficiently in all of our play types. Murcia's new coach Sito Alonso has already overseen a win over Barça in the ACB, he will also need to oversee a change in the way his team turns the ball over. 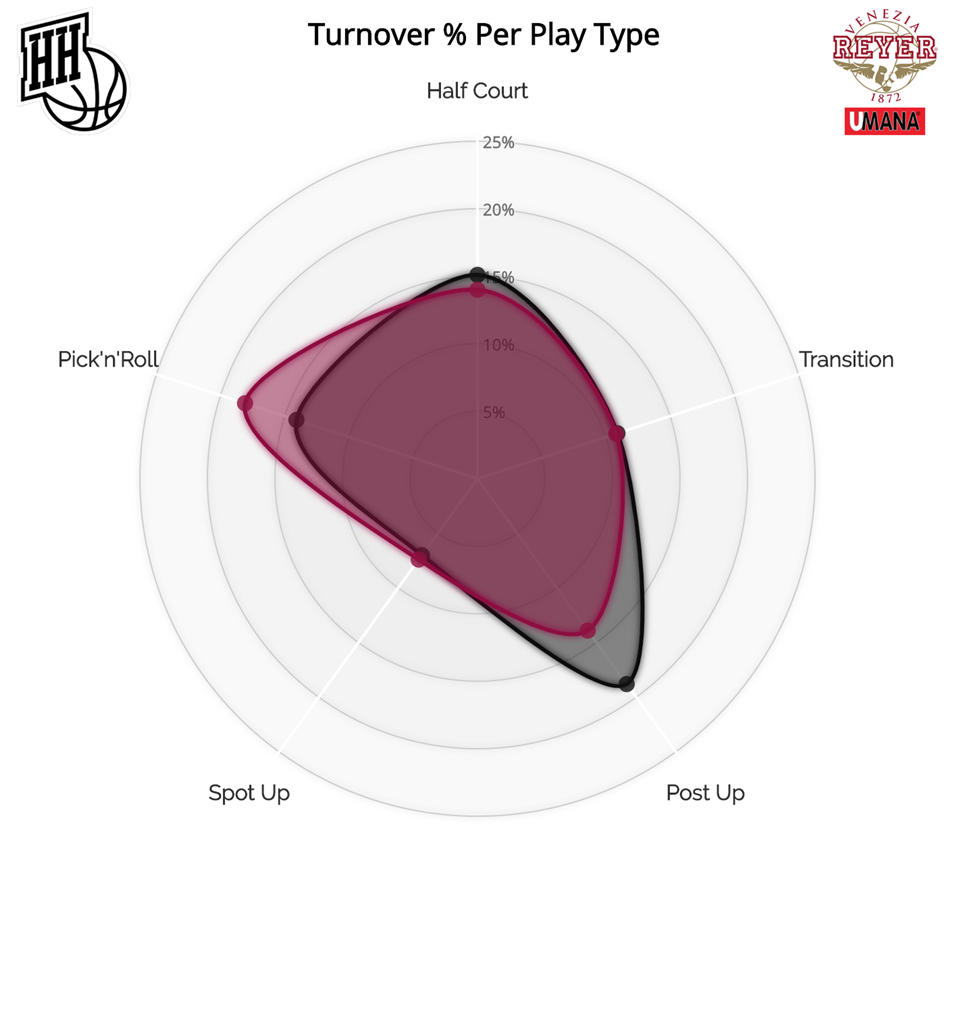 Honors relatively even here. The Russians may look at their Pick-and-Roll coverages on defense as an opportunity to force turnovers and Coach De Raffaele may have been studying the tape and looking at attacking Nizhny's post offense. If anything, Venezia's overall TOV% is certainly lower but nothing here really challenges the perception that this is the toughest tie to call in the Round of 16. 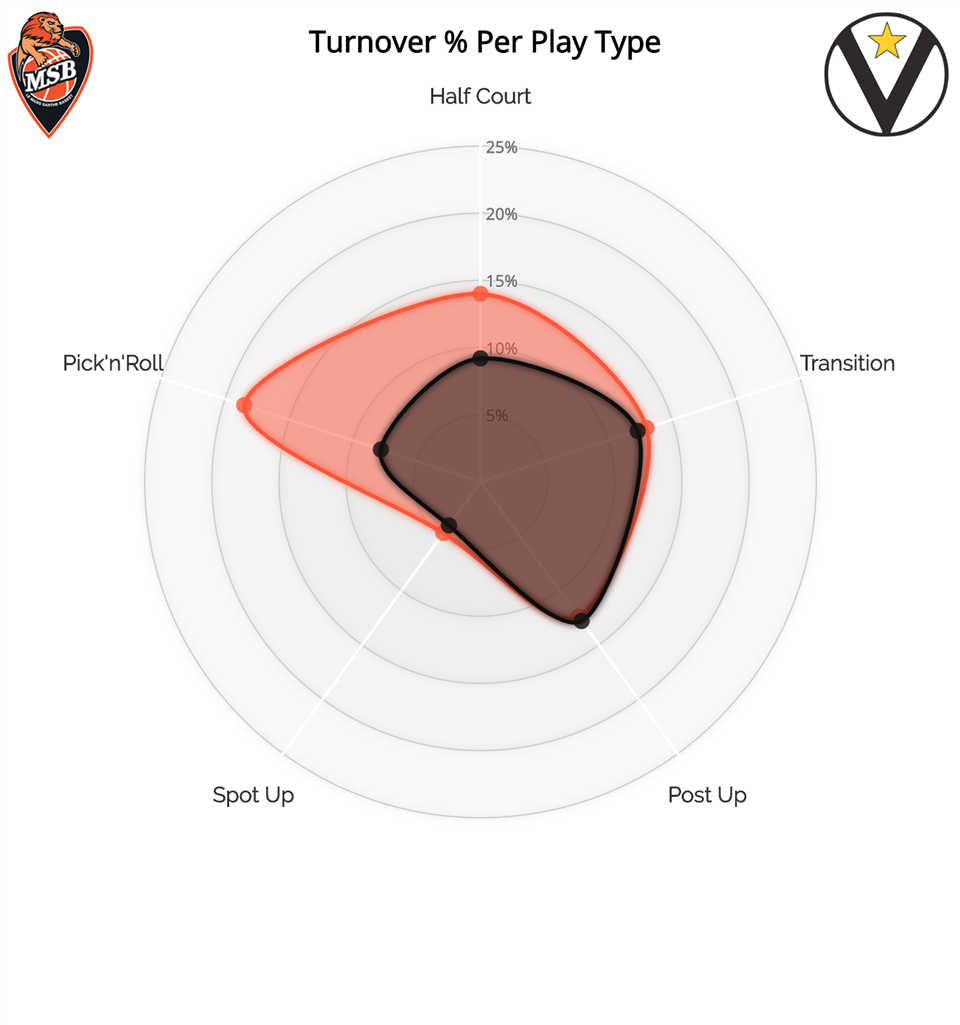 Here we see two very low TOV% teams matched up. Bologna has the lowest TOV% in the BCL at just 10% but Le Man is also top ten at 11.6%. The challenge is clear for the Frenchmen; look after the ball in the Pick-and-Roll. Don't be surprised to see Bologna mixing up their Pick-and-Roll coverages in an attempt to keep them out of rhythm and take advantage. 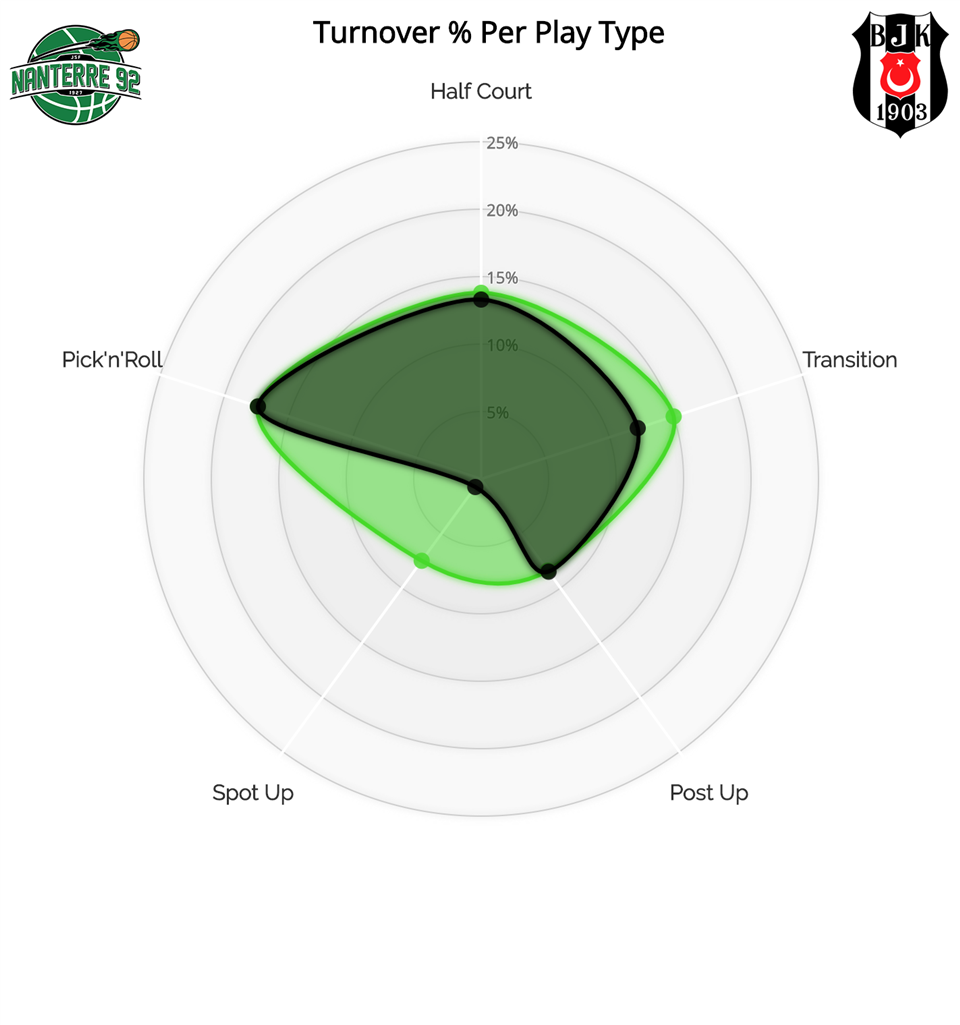 In the shooting preview, we saw a clear contrast in Nanterre's outside shooting and Besiktas' dominance in the paint. The overall shooting advantage was with the Green Lights of Nanterre. For Turnovers, the advantage is clearly with Besiktas' more experienced roster. Nanterre turn it over more in transition and considering their preference for shooting the 3-ball, their TOV% on Spot-Up plays has to hand the advantage to Dusko Ivanovic's men. The Queen turn it over less in transition, less on Post Up plays and less overall. PAOK has a fantastic record against AEK domestically and this remains one of the most fascinating ties in the Round of 16. If the men from Thessaloniki are to keep it fascinating they will need to look after the ball. 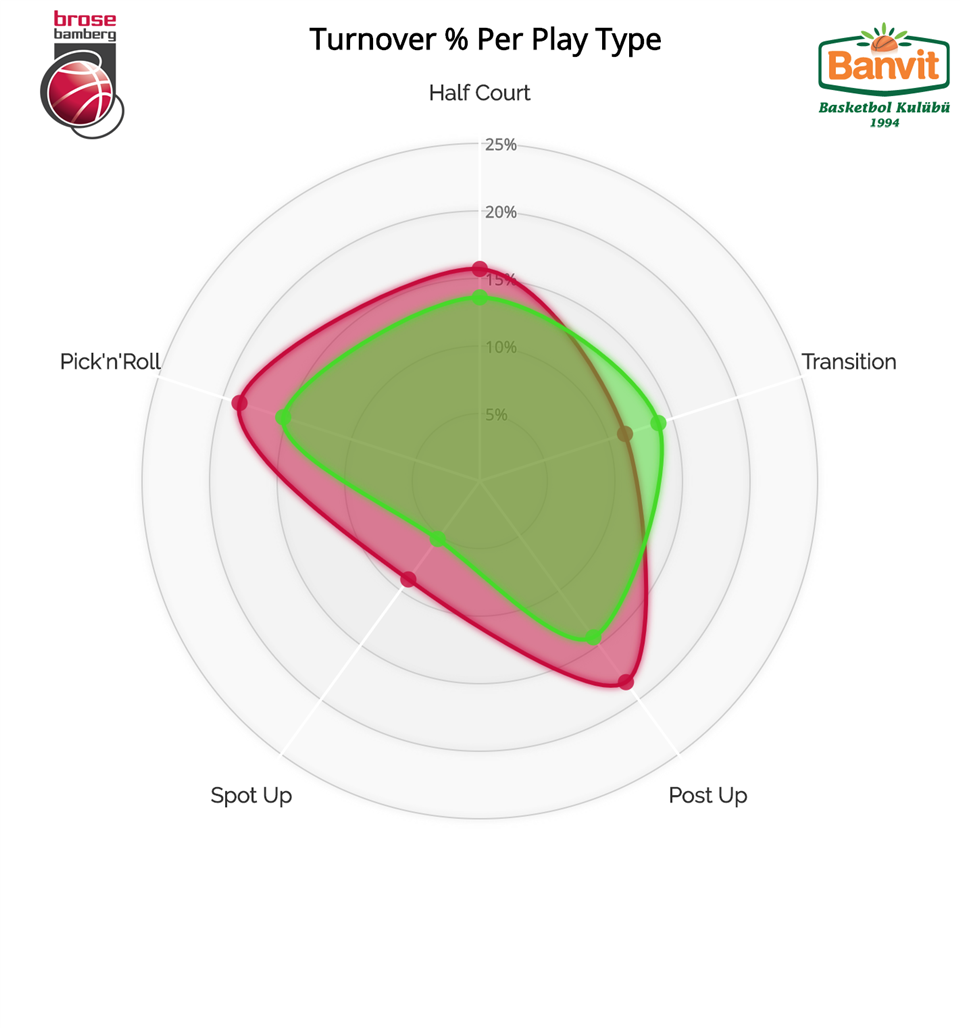 Finally, we come to the last game in the preview. Alongside the Nizhny vs Venezia, this is the game that the experts are most divided on. Bamberg is coming off an incredible German Cup win over Alba Berlin. If you haven't checked out the Nikos Zisis podcast, you really should! It's such a blessing that we have a legend of his stature in the BCL. When it comes to shooting the Germans have the advantage almost everywhere on the floor but for Turnovers, it's a different story.

Banvit turns the ball over less in all of our play types except transition. And when you consider the Turkish team's prowess as a defensive unit that forces a high percentage of Turnovers, we can clearly see a dangerous mix for the men from Freak City. In their favor is more veteran leadership in their backcourt than you could possibly ask for. Zisis and Rice have seen just about everything in European basketball and the backcourt battle with Moore, Neal, Perez and the hustle of Ulusoy could decide this tie. Power Rankings: Last checkpoint before the Round of 16 duels take place