ZAGREB (Croatia) - Don't call the fire department, the questions aren't really burning. Despite the fact that some of the players and teams were on fire in the Play-Offs on Tuesday and Wednesday.

Here, at the Help-Side Column headquarters in Zagreb, Croatia, the only thing that was burning were my fingers, because so much was going on that I had to type 100 mph just to keep up with everything. And yet, there I was, thinking, "oh, this will be a walk in the park," with just eight games to follow this week, compared to the usual 16...

(Is it possible that the February break made me slower than a 2018 Williams F1 car? Could it be that a month without Basketball Champions League Live Blog duties turned my laptop into an Aprilia MotoGP engine?)

But, keeping the fire burning in between two Round of 16 legs just like Tom Hanks in Cast Away (2000), here are my burning questions heading into reversed fixtures next week. And, putting out the fire are the coldest answers I could come up with.

Burning question: Could Malcolm Griffin's ill-advised, badly-timed three-point shot with six seconds left at +12 prove decisive, since PAOK now have to chase a 10-point win in Athens, instead of a +13 or even +15 or +16?

Coldest answer: No. AEK looked more than impressive for 39 minutes and 54 seconds, the defending champs blowing a huge lead like this at home would be more shocking than Williams or Aprilia winning a race.

Burning question: Will the rims survive in Pais Arena, Jerusalem?

Coldest answer: God, I hope not!

Burning question: Will the fact that Banvit don't have anybody to matchup with Elias Harris' (19 pts in 18 mins) strength and execution, and Tyrese Rice's (20 pts) clutch-ness after coach Federico Perego draws up sublime playsets outweigh the fact that Bamberg have no clue what to do when Gary Neal and McKenzie Moore start making shot after shot, from anywhere on the court, especially in Bandirma where they are usually unstoppable once they hear the cheers from their fans, who will undoubtedly fill the Kara Ali Acar Spor Salonu arena once again?

Burning question: Would it be a miracle if Venezia stopped Kendrick Perry and won the tie from 23 down?

Coldest answer: No. Umana Reyer Venezia have already won FIVE games by 23+ points this season, against Pistoia, Pesaro, Trento, Avellino and Pistoia again. They are capable of doing this.

Burning question: Can Besiktas repeat their pattern of winning large after scoring in 50s?

Coldest answer: Yes. If history taught us anything, it's the fact that Dusko Ivanovic's teams have character, and never fall into depression after a horrid performance, like the one they had against Nanterre. Get this, they are 3-0 this season in games following the ones in which they scored 50-ish.

See the pattern here? And, their three wins were flirting with the desired +9. Like in life, some flirtations were successful, other were not. What would you do on the second rendezvous with Nanterre, BJK? Be nice, open the doors, buy some flowers, and anything could happen with the romantic background of Istanbul.

Burning question: Are Tenerife really about to drop out in the Round of 16 for the second straight season!?

Coldest answer: Honestly, can't see them repeating their abysmal 3-of-20 three-point shooting performance in San Cristobal de La Laguna. Just 7-of-20 would've made this a draw, and you know Tenerife are capable of going 14-of-20 in a game.

Burning questions: Have the youngsters from Belgium grown up right in front of our eyes in that Game One?

Coldest answer: Yes! It wasn't just because they handed UCAM their second defeat of the season, but also because of the way they have done it. They had so many moments in which they could've blown the game and the tie - building a 31-15 lead, and surrendering a quick 0-7 run, but bringing the lead back to 10+ points; building a double digit lead to see it all fall away when Milton Doyle tied the score at 67-all with 120 seconds to go, and finishing strong with an 8-0 run to take a commanding lead in the tie.

Antwerp did not look like a team with zero players older than 27, not for a second on Wednesday. That also shows how good of a coach and a mentor Roel Moors really is. But, be careful, my Giants. Every time I was making a point on how good somebody was in the Help-Side Column, that team lost by a million the next day. Don't @ me if it happens to you, too.

Burning question: Can Valentin Bigote pull off another season-high, while Kevin Punter goes 2-of-11 from the field?

Coldest answer: Yes. Bigote could explode again, and I wouldn't even consider it "explosion," because he has scored 75 points in his last four Basketball Champions League games, just five less than in his first 11 games combined.

But, the other part used to be unthinkable. Kevin Punter, my all time favorite Basketball Champions League player (don't tell anyone), is shooting just 5-of-22 from the field in his last two international games. Including 2-of-14 from beyond the arc.

Time to do what you said in that video up there. Got a lot more to prove - now is your time! 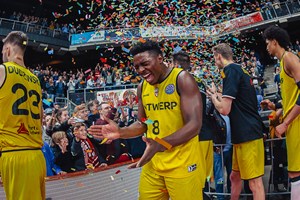